Just click on the three dots in the Firefox address bar and select the “take a screenshot” item from the menu to start the process. You can capture the entire page or part of it, and save the screenshot online or locally.

I spotted Easy Screenshot on Mozilla’s Firefox Add-ons website; it has the fourth largest installation base of all Firefox extensions. 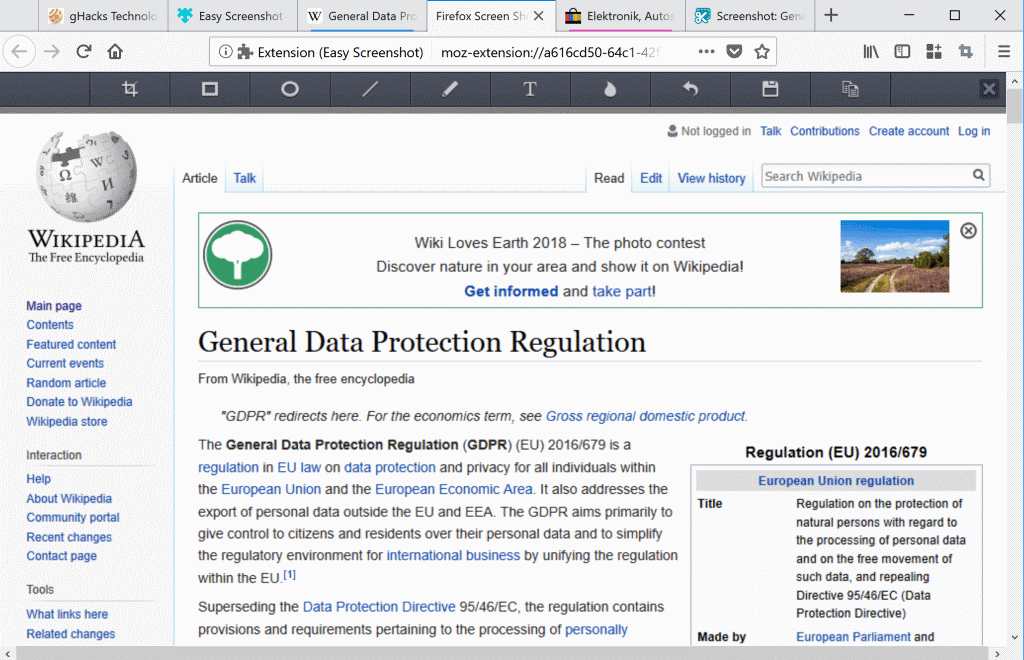 Easy Screenshot is created by Mozilla Online, a whole subsidiary of Mozilla Corporation that operates in China. The subsidiary distributes custom Firefox browsers in China and releases some of the extensions that it creates on Mozilla AMO.

Easy Screenshot is a screen capturing extension for Firefox that users of the web browser may install. It adds screenshot capturing and editing to the browser; one of the core differences to Firefox’s native screenshot implementation is that Easy Screenshot does not support online uploads or sharing of screenshots online as it saves screenshots to the local system only.

The extension has not been updated since 2017 and it is likely that it won’t receive any more updates thanks to the native integration of screen capturing in Firefox; still, it does not appear to be based on Firefox Screenshots.

Note: Easy Screenshot is not the first extension to add screen capturing functionality to Firefox. We reviewed NativeShot back in 2016 which supported similar functionality. NativeShot is not compatible with Firefox 57 or newer, though.

Easy Screenshot is very simple to use: click on the extension icon displayed on Firefox’s main toolbar and select the type of screenshot that you want to capture. The extension supports capturing the entire web page, the visible part of the web page, or a region on the web page.

You draw a rectangle on the screen if you select region from the list of options, the other two screen capturing methods work automatically. All three load the built-in image editor after the capturing.

The editor supports a couple of basic options: draw shapes such as rectangles or lines on the screen, use freehand drawing, add text,  or blue content. You can copy the screenshot to the clipboard after the editing or click on the save icon to save it to the local system.

Easy Screenshot is a super simple yet powerful screen capturing extension for Firefox. It is compatible with Firefox 57 and newer versions of the web browser. The core differentiating factors between Easy Screenshot and Firefox’s native screen capturing functionality are the former’s focus on saving screenshots locally only and better image editing tools.

Now You: How do you you capture screenshots in your browser of choice?

Ghacks needs you. You can find out how to support us here or support the site directly by becoming a Patreon. Thank you for being a Ghacks reader. The post A look at Easy Screenshot for Firefox appeared first on gHacks Technology News.