Some Firefox users spotted a new feature listing in the browser recently called Baidu Search Update. You can verify if the feature is installed in your version of Firefox by loading about:support and checking the “Firefox Features” section.

If you see Baidu Search Update listed, it is installed. Features are being pushed by Mozilla, usually in form of native extensions.

What makes the Baidu Search Update listing puzzling is that its ID lists mozillaonline.com and not mozilla.org. 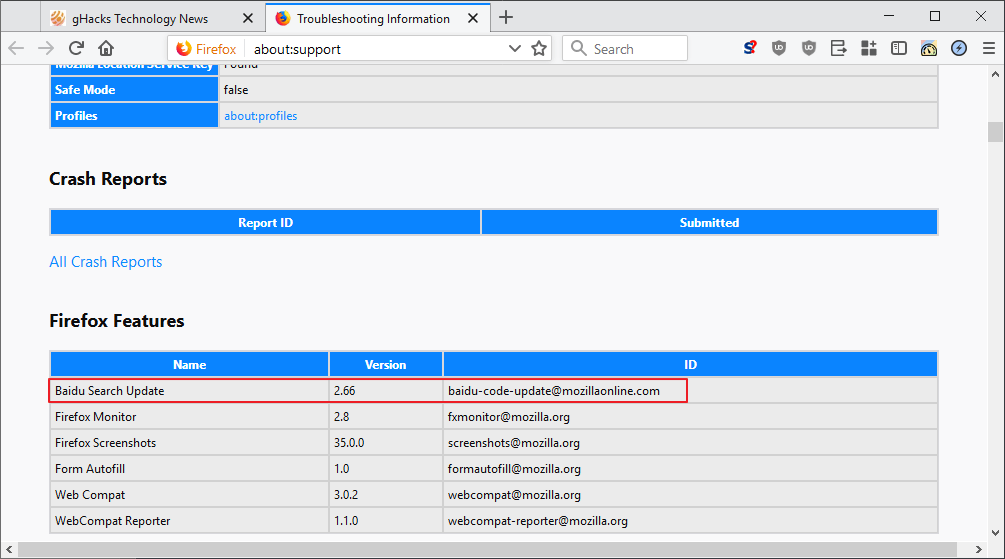 Some users suspected that it could be malicious based on the information (different domain and Baidu not being installed in Firefox); that is not the case.

Mozilla dropped Yahoo as the main search provider in 2017 for a number of reasons. The organization changed its search strategy from a global one to one that would seek out local partners in some regions, and Baidu happens to be one of the partners.

Firefox users may install other search engines and even custom ones in the browser.

Firefox sends information with each request to partner search engines, and it appears that this code needed to be updated.

Bug 1541316 on [email protected] highlights the process. Mozilla decided to ship the change to all users and not just users from China and users who would use a Chinese locale.

Filtering by locale would be “extremely difficult” and “potentially buggy” according to one entry, and that is probably the main reason why Baidu Search Update was shipped to all users.

Mozilla was well aware that this could lead to some concerns as some users would certainly spot the feature under Firefox Features on about:support. The organization expected that most users would not notice as the update would not be listed on about:addons. The feature will ship to Firefox ESR installations as well.

Note: you may control features, also known as system add-ons in Firefox. Blocking system add-ons may lead to some issues should Mozilla decided to push updates to Firefox that correct issues in the browser.

Good news is that the new feature is not malicious. From an outsider’s perspective, it would have been better if Mozilla would have just updated the search engine code in new Firefox releases as this would have avoided any confusion in this regard.

Ghacks needs you. You can find out how to support us here (https://www.ghacks.net/support/) or support the site directly by becoming a Patreon (https://www.patreon.com/ghacks)). Thank you for being a Ghacks reader. The post About Baidu Search Update in Firefox appeared first on gHacks Technology News.