A new version of the cross-platform e-book manager and reader Calibre was released on October 4, 2019. Calibre 4.0 is a major update that features a completely rewritten e-book viewer among other changes.

The new version is already available for all supported platforms on the official Calibre website. Download versions of Windows (32-bit or 64-bit), Linux, or Mac Os X from the download section and either install or replace the existing copy of Calibre with the new version.

Calibre 4.0 is the first major update of the e-book manager since 2017 when Calibre 3.0 was released (Calibre 2.0 was released in 2014 and Calibre 1.0 in 2013, and our very first review dates back to 2009). Most of the development time went into migrating Calibre from the previously used QT WebKit to QT WebEngine as the former is no longer maintained and made the migration necessary.

Several core components of Calibre had to be rewritten as a consequence including the e-book viewer, book details and PDF Output. The interface of Calibre 4.0 looks identical to that of Calibre 3.0 for the most part. You find the toolbar at the top and the list of e-books added to the application below that.

You will notice changes when you open an e-book in Calibre 4.0. The player displays a short help text on start that highlights keyboard shortcuts. You may use PageUP/PageDOWN or the Arrow keys to turn pages, the ESC-key or a right.click to display controls.

The interface of Calibre 4.0’s e-book reader has no controls; the focus is on the content and it looks similar to distraction free writing or reading modes of other applications. 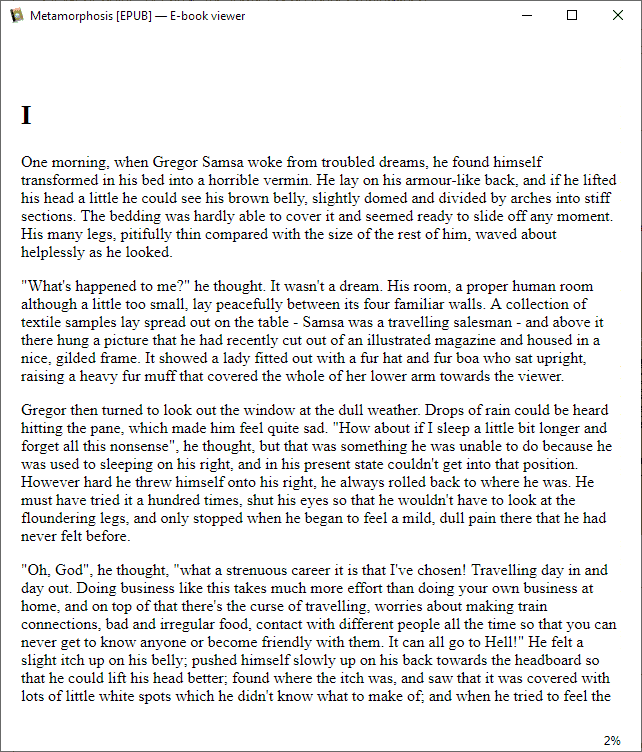 It becomes clear then why the shortcut keys are highlighted on start as users might have troubles finding out how to navigate the ebook.

A right-click or a tap on the Esc-key displays the entire menu that displays all available options. You find options to search there, display the table of contents, change the font size, set bookmarks, enter full screen, or look up a word. The help text is displayed only once by Calibre 4.0 and not every time you open a book in the viewer.

Tip: find out how to convert ebooks and document formats using Calibre.

The migration from the old engine to the new introduced minor backwards incompatibilities. The book details panel should be faster now as it no longer uses a full browser engine for rendering; downside to that is that it does not support all HTML or CSS that it supported in earlier versions. Users who have used advanced styling options may notice that these may not work anymore in the new version.

Additionally, markup for header and footer templates when converting PDF documents has changed. You may check out the manual here for details.

Calibre 4.0 is a major update of the e-book manager and viewer; most changes happened under the hood but some core components, the document reader being one, have changed in the process as well.

Now you: do you use a program to read e-books?

Thank you for being a Ghacks reader. The post Calibre 4.0 e-book manager is out appeared first on gHacks Technology News.