Cloudflare revealed the company’s first VPN product today called Warp which it plans to launch as part of the company’s 1.1.1.1 application soon.

April 1st is probably the worst day to make announcements for products that do exist. Cloudflare apparently could not pass the opportunity to select April 1st, or 4/1, as the date to reveal Warp.

The company launched a DNS service a year ago and with it the DNS applications 1.1.1.1 for Android and iOS. The service supported security features like DNS-over-TLS and DNS-over-HTTPS, a strict no IP address logging policy, the deletion of logs in a 24-hour period, and fast speeds especially compared to default DNS services operated by most ISPs.

Warp encrypts all Internet traffic, respects end-to-end encryption, and does not require that users install a root certificate on their devices.Unencrypted Internet connections will be encrypted but only between the user’s device and Cloudflare’s server (similarly to how all VPNs handle this). The same is true for all respected VPN services.

Cloudflare promises that Warp’s performance, reliability, and focus on preserving power are what will set it apart from comparable services.

We’ve built Warp around a UDP-based protocol that is optimized for the mobile Internet. We also leveraged Cloudflare’s massive global network, allowing Warp to connect with servers within milliseconds of most the world’s Internet users. With our network’s direct peering connections and uncongested paths we can deliver a great experience around the world. Our tests have shown that Warp will often significantly increase Internet performance.

Warp will be offered as a free option that is included in the company’s 1.1.1.1 application. Cloudflare is working on Warp+, a premium version of Warp that will be available for a “low monthly fee” for people who want more speed.

It is not uncommon for companies to finance free versions of a product using premium offerings.

Warp+ follows Cloudlfare’s web-based servicing model. The company offers a base version of Cloudlfare for free and paid upgrades to unlock certain features.

Cloudflare promises, in regards to the always hot topic privacy, that

The service itself uses WireGuard combined with Cloudflare’s Mobile SKD. Warp+, the premium version of Warp, will use Cloudflare’s Argo next to that as well. 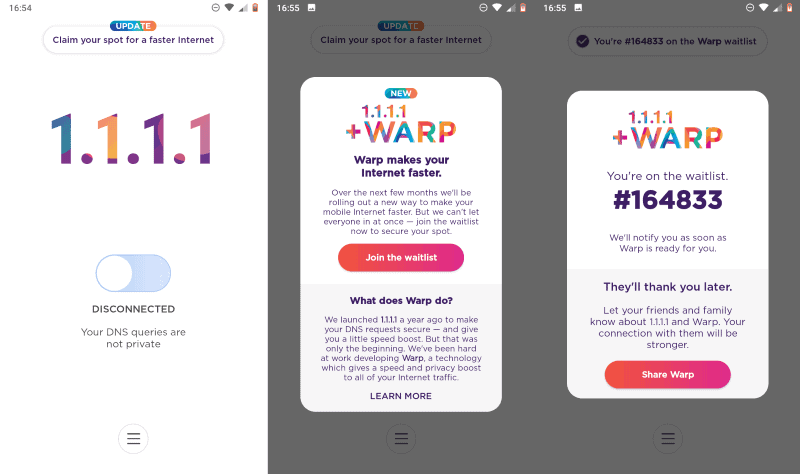 Warp’s strengths are that it is backed by a company that operates one of the largest networks on the planet, and that it will become a part of the 1.1.1.1 on mobile for ease of use. Users don’t have to sign up for it if they use the free version similarly to how Opera’s browser VPN works. The difference is that Warp works globally while Opera’s solution only in the browser.

Desktop applications will be released at a later point in time. Warp won’t convince users that distrust Cloudflare, but the success of the 1.1.1.1 application has shown that there is a huge market out there for such a product.

Now You: What is your take on Warp?

Ghacks needs you. You can find out how to support us here or support the site directly by becoming a Patreon. Thank you for being a Ghacks reader. The post Cloudflare announces Warp VPN service appeared first on gHacks Technology News.