Opera users who have used the browser’s Opera Turbo feature in the past may notice that the feature has been removed in the latest version of the web browser.

Opera Turbo was revealed in 2009 originally by Opera Software and implemented natively in the classic Opera web browser later on. Designed to speed up web browsing, Opera Turbo would compress data by tunneling it through Opera servers in an effort to improve connectivity and the time it takes to render webpages in the browser.

Turbo comes at a cost though for users and Opera Software. Opera redirects traffic through company servers which raises privacy concerns. Opera Software has to maintain Turbo servers.

Google introduced a similar feature called Data Saver for Chrome on Android and desktop versions of Chrome. The company deprecated the Data Saver extension for desktop Chrome in 2019.

Opera users who have upgraded the browser to the latest version may notice that Opera Turbo is not a part of the Opera web browser anymore. A search for Turbo in the Opera Settings returns no options to enable the feature, and manually browsing the options returns no Turbo listing anymore either. 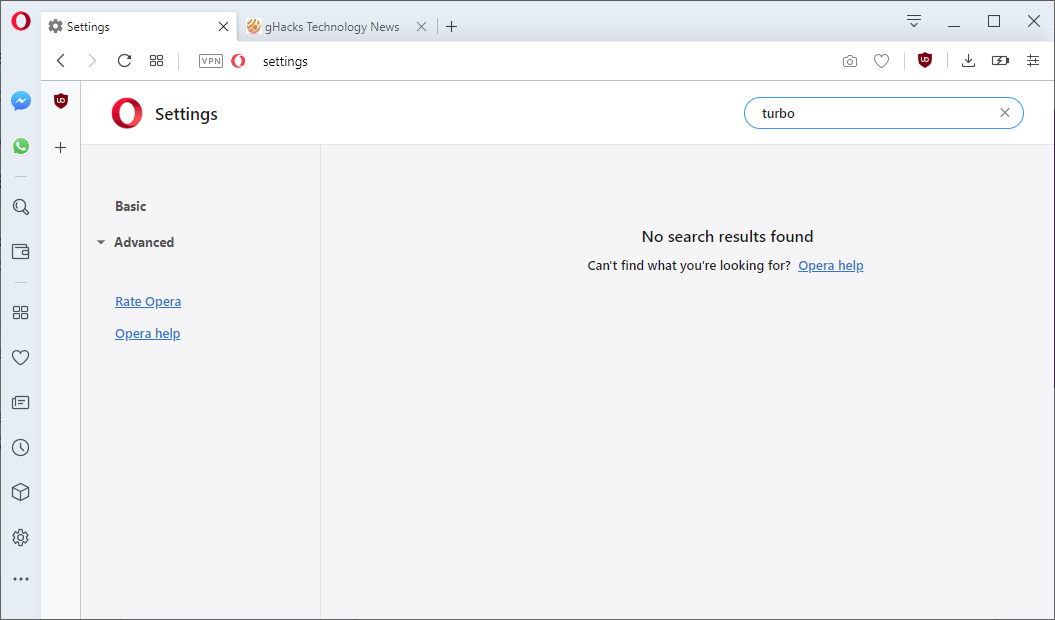 Opera Software removed the Turbo menu listing when it released Opera 46 in 2017 but did not remove Turbo support and kept a Turbo option in the Settings of the web browser.

Techdows reports that the last Opera version to feature Turbo is Opera 58. Opera 60 is the third Opera Reborn release. Opera Reborn is an attempt by Opera Software to modernize the web browser and make it more distinguishable from other Chromium-based browsers.

The changelog contains no information on the removal of Opera Turbo. Some Opera users noticed the removal when Opera 60 was released and posted comments on the official release post on the Opera blog. Opera did not reply to these comments but some suggested that Opera Turbo has been deprecated.

It seems that Opera Turbo is no longer supported by Opera Software. The most likely reason for the deprecation of the feature is the rise of HTTPS on the Internet. Opera Turbo was designed to compress HTTP traffic only and the migration to HTTPS in recent years reduced the effectiveness of the solution significantly.

Now You: Did you use Opera Turbo in the past?

Ghacks needs you. You can find out how to support us here (https://www.ghacks.net/support/) or support the site directly by becoming a Patreon (https://www.patreon.com/ghacks)). Thank you for being a Ghacks reader. The post Did Opera Software just remove Opera Turbo from its browser? appeared first on gHacks Technology News.