Mozilla announced the launch of the Firefox Recommended Extensions program in April 2019 to increase the visibility of extensions and promote them better.

The new program takes the concept a step further. Extensions need to meet certain requirements for inclusion in the program; among them a commitment from the developer, that they pass manual reviews each time they are updated and initially, and that they need to be “really good” at what they do.

Extensions that make it are promoted by Mozilla in various ways. The organization plans them to power the recommendations that Firefox displays on about:addons and contextually, and promote them on Mozilla AMO and through other means.

Tip: we asked you which extensions you’d like to see promoted by Mozilla recently. 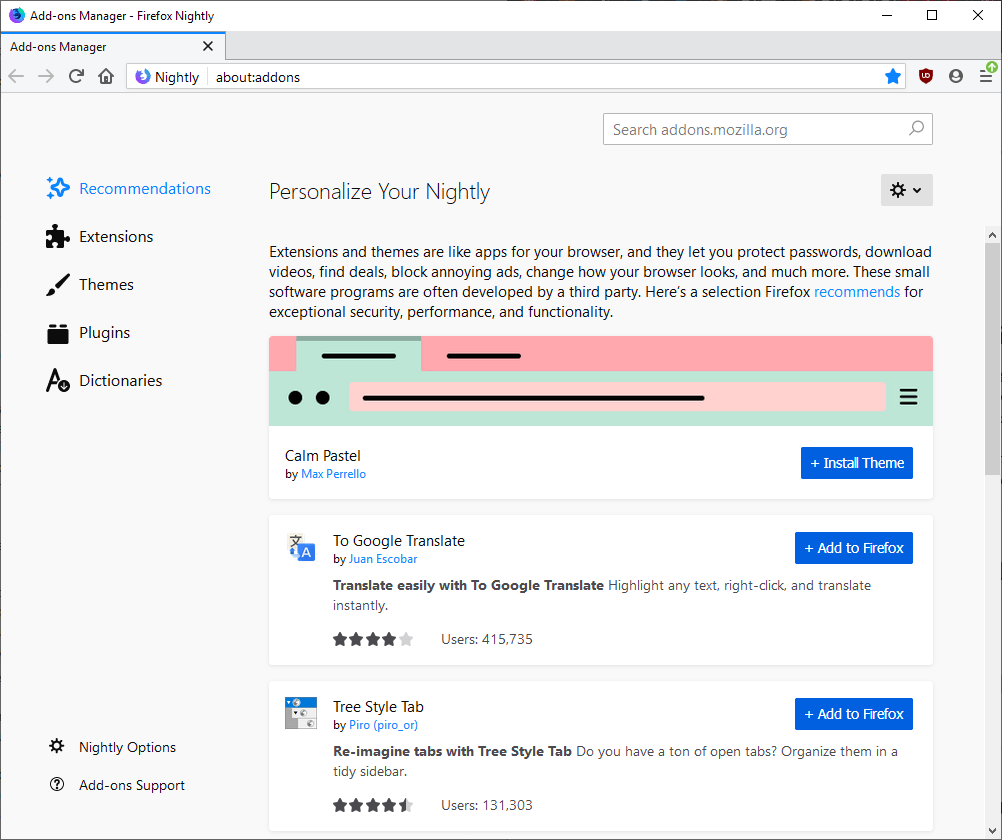 Mozilla integrated the new recommendations page of about:addons in the latest Firefox 68 Nightly version. The page is not enabled by default at the time, but can be enabled in the following way:

Visit about:addons afterwards to see the new page in action. It looks similarly to the old but there are some differences. Technically, the new recommendations page is no longer loaded as an iframe but a native page.

Firefox connects to two Mozilla-owned domains to pull recommendations and images; the browser downloaded a HTML document previously as well as scripts and styles previously.

When you compare the old page to the new, you will notice differences immediately. The general page layout is very similar to the classic page but Mozilla added ratings and user counts to the page.

Add-ons are listed with their name, developer, and description in the current version; the new recommendations page lists ratings and user counts. Both useful to determine the quality of an extension.

Listed add-ons are reviewed manually by Mozilla, another core difference to current recommendations. Mozilla will review each update of extensions that are in the Recommended Extensions Program which improves security significantly.

More extensions will be added to the program in the future so that users may see some variation when opening about:addons.

Now You: What is your take on Firefox’s Extensions Recommendation Program? (via Techdows)

Ghacks needs you. You can find out how to support us here (https://www.ghacks.net/support/) or support the site directly by becoming a Patreon (https://www.patreon.com/ghacks)). Thank you for being a Ghacks reader. The post Enable new Firefox Recommended Extensions suggestions in Firefox 68 Nightly appeared first on gHacks Technology News.