Mozilla plans to upgrade Firefox 32-bit installations to the 64-bit version of the web browser when it releases Firefox 56 later this year.

Mozilla started to release Firefox 64-bit for Windows in December 2015 to the release channel. This was first an optional download that users had to seek out, but has since then been made the default.

The organization revealed in August 2016 how it planned to make Firefox 64-bit on Windows the default for compatible systems, and migrate the 32-bit population on 64-bit architecture to the 64-bit version of the browser. 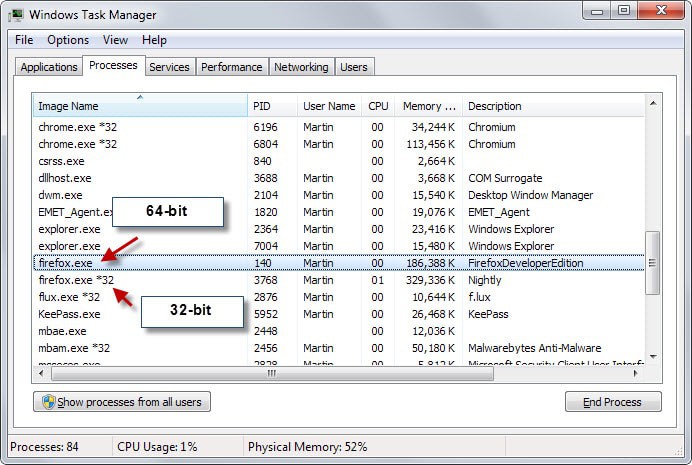 The plan back then involved integrating the 64-bit version in the Firefox stub installer, making it the default in early 2017 in that installer, and shipping Firefox 64-bit as the default later that year.

Starting with Firefox 55, which has a planned release date of August 8, 2017, 64-bit Firefox will be the default option on Windows. This is only the case however if the Windows device supports 64-bit and has at least 2 Gigabytes of memory.

Migration from 32-bt versions of Firefox to 64-bit on Windows start with the release of Firefox 56. Mozilla plans to release Firefox 56 on September 26, 2017.

The same limitations — a minimum of 2 Gigabytes of RAM and at least Windows 7 — apply to the migration.

Mozilla published some stats that highlight these improvements and changes:

Additional information on the migration to 64-bit Firefox on Windows is available on the Mozilla Wiki website. (via Sören Hentzschel)