Mozilla plans to make changes to the profile handling of the Firefox browser in Firefox 65.  Firefox will switch to a dedicated profiles per install model in version 65 that assigns different profiles to each installation of the browser.

Tip: load about:profiles in Firefox for a detailed view of all existing profiles.

Firefox stores all user data in user profiles and the main user profile is shared across different channel versions of the web browser right now with the exception of the Developer Edition which uses a dedicated profile by default.

Using the same profile with different versions of Firefox may cause issues: from crashes on startup to broken functionality because of version changes. Two recent examples were the releases of Firefox 55 and Firefox 63 which users could not downgrade to earlier versions. 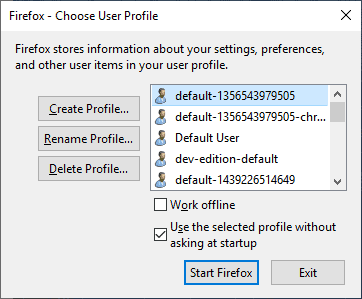 Firefox 65 automates the process for separate installations. Instead of having to create profiles for each version of Firefox manually, Firefox creates these for the user automatically.

The change should not impact users who use command line parameters or the Firefox profile manager to select profiles to run on start of the browser.

Mozilla revealed that it plans to integrate downgrade protection for profiles in Firefox as well. Basically, what the developers attempt to do is detect downgrade conflicts and warn the user about it.

For cases where users manually downgrade an install of Firefox or attempt to forcefully use an older version of Firefox with a newer profile the profile downgrade protection feature will now tell the user that the profile is too new to use with this Firefox giving them the option to create a new profile to use or to quit.

The introduction of dedicated profiles for Firefox installations helps users who install and use different versions of the browser. While it won’t be beneficial to users who use command line switches already to juggle between different profiles, it may be beneficial to the bulk of users who don’t do so.

Downgrade protection, as long as there is an override switch, is another useful feature to avoid conflicts when running different Firefox installations and a single user profile.

Now You: Do you use multiple Firefox profiles?

Ghacks needs you. You can find out how to support us here or support the site directly by becoming a Patreon. Thank you for being a Ghacks reader. The post Firefox 65: dedicated profiles per install appeared first on gHacks Technology News.