The update is not available yet but Firefox users will get it as part of the web browser’s automatic update system or as a standalone download and installation.

Administrators can install the standalone version over an existing version to upgrade it without losing any of their data.

Mozilla released Firefox 67.0 on May 21, 2019. The new web browser introduced WebRender support to a fraction of the user base and included performance improvements.

Update: Mozilla published release notes on June 4, 2019. The new version includes a change that enables Enhanced Tracking Protection for all new installations, and adds a new “set of experiences” that highlight certain benefits of Firefox. The experiences will roll out to English, French and German browsers starting June 4, 2019. End 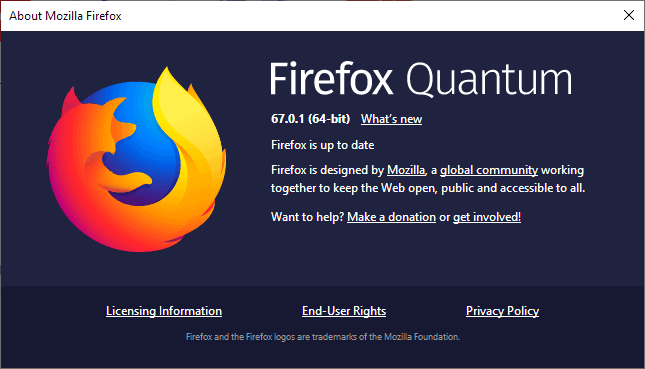 The Firefox 67.0.1 release notes are not out yet and there is surprisingly little information available at the time as to what the update fixes in the stable version.

Firefox would see the upgrade from Firefox 67.0 to 67.0.1 as a downgrade and trigger the downgrade warning prompt in that case to warn users about potential conflicts that may arise out of this.

Mozilla added a compatibility check to Firefox to prevent data corruption issues when administrators downgrade Firefox to an older version. Downgrades may lead to data corruption and load errors if the version Firefox is downgraded to uses different formats or data types than newer Firefox versions.

All Firefox users who would upgrade the browser from Firefox 67.0 to Firefox 67.0.1 would be informed by Mozilla on the first launch after the upgrade that they were about to launch an older version of Firefox and that that warning prompt prevented that from happening.

The prompt would not look too good and would cause lots of confusion among users as it offered only two options: create new profile or quit. Firefox users would not be able to use the browser with the old profile or use it at all as a consequence.

The issue is caused by a math error when comparing the old version and build IDs to the new versions as explained on the Bugzilla listing by Dave Townsend.

We build compatibility versions as _/. where the build ID’s by default are a numeric representation of the date that the build happened.

Previously we attempted to mangle this into a valid toolkit version by converting to .. if the build IDs were the expected length. We also split each build ID into two version parts since the version comparator couldn’t handle their full size.

This mangling fails when comparing a major version with a new patch version:

.. gets compared to .1… Unless that patch version (1 here) was greater than the build ID (currently in the tens of millions) the patch release would appear to be older than the previous version.

It is unclear if Firefox 67.0.1 addresses other issues. We will update the article once the official release notes are published by Mozilla.

Ghacks needs you. You can find out how to support us here (https://www.ghacks.net/support/) or support the site directly by becoming a Patreon (https://www.patreon.com/ghacks)). Thank you for being a Ghacks reader. The post Firefox 67.0.1 Release Information appeared first on gHacks Technology News.