The Firefox Add-ons Manager will soon display the release notes of updated extensions directly in the web browser.

Mozilla plans to release the new feature in Firefox 68 which is scheduled for a July 9, 2019 release.

Add-ons are updated automatically by default whenever a new version is released by the developer or publisher. Firefox users who want more control over the update process may change the default behavior to turn automatic updates off.

Current versions of Firefox, those prior to version 68, don’t reveal update information when you select Extensions. Updates are highlighted under Available Updates in the Add-ons Manager but only until the update is installed.

The only option after installation was to visit the extension’s profile page on the Mozilla Add-ons repository, or to look the information up on the developer’s site if they were provided there.

The profile page on Mozilla AMO lists the release notes of the latest version of an add-on. It is possible to click on “see all versions” on the page to display release notes for previous releases.

Starting with Firefox 68, release notes are also a part of the Extensions listing of the Firefox web browser. Apart from that change, the latest release notes are listed there so that it is possible to go through them after the fact. 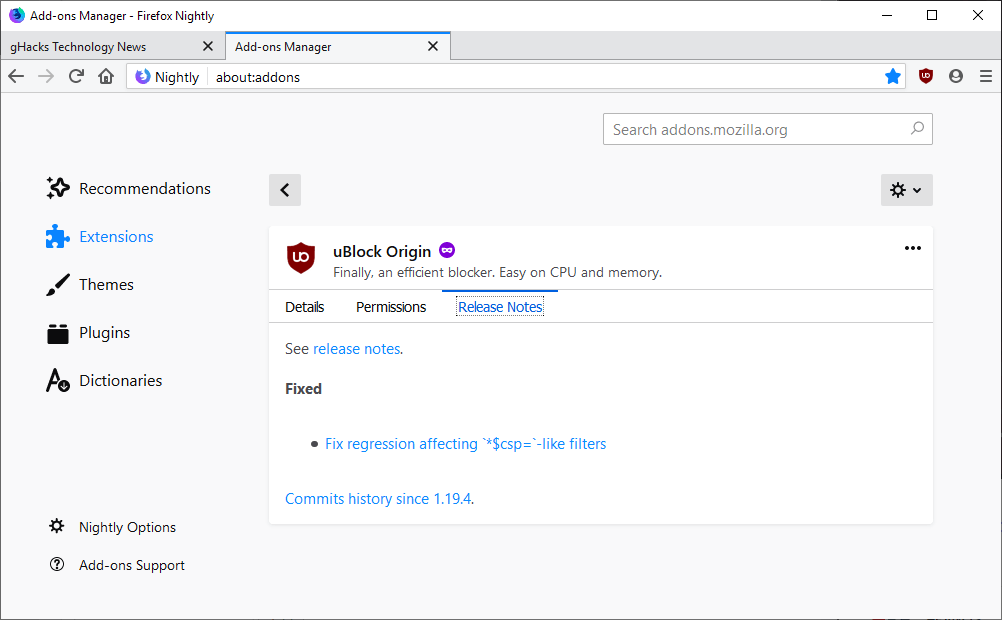 All you need to do is open about:addons in the Firefox web browser, click on one of the installed browser extensions, and switch to the Release Notes tab.

Note that you can also click on the menu icon (the three dots) next to any extension and select “more options” to open the details page of the installed extension.

Release Notes are pulled from Mozilla’s AMO website when they are opened in the browser; it may take a moment to display them because of that. Implementing an option to integrate release notes with releases so that they don’t need to be fetched separately would be a welcome improvement.

The option to display release notes directly in the Firefox Add-ons Manager is a welcome step in the right direction. I’d like to see an option get these displayed during add-on updates as well to get even more control over the updating process.

Mozilla could implement these optionally and keep the automatic process the default in coming versions of Firefox.

Now You: What is your take on the change? Anything you’d like to see added to it?

Ghacks needs you. You can find out how to support us here (https://www.ghacks.net/support/) or support the site directly by becoming a Patreon (https://www.patreon.com/ghacks)). Thank you for being a Ghacks reader. The post Firefox 68: add-on release notes in add-ons manager appeared first on gHacks Technology News.