Firefox 70 has an issue currently that prevents some pages or page elements from being loaded under certain circumstances. Mozilla added the known issue to the Firefox 70.0 release notes stating that some “websites or page elements using dynamic JavaScript fail to load”.

The release notes link to a support article on the Mozilla website that provides a workaround for the issue and more context.

According to the article, sites like YouTube or Facebook that use dynamic JavaScript may be affected by this. Mozilla created a test page for the issue that Firefox users may open in the web browser to find out if their version of the browser is affected.

Just point the web browser to this page and check the status that is returned for the tested subsystems. 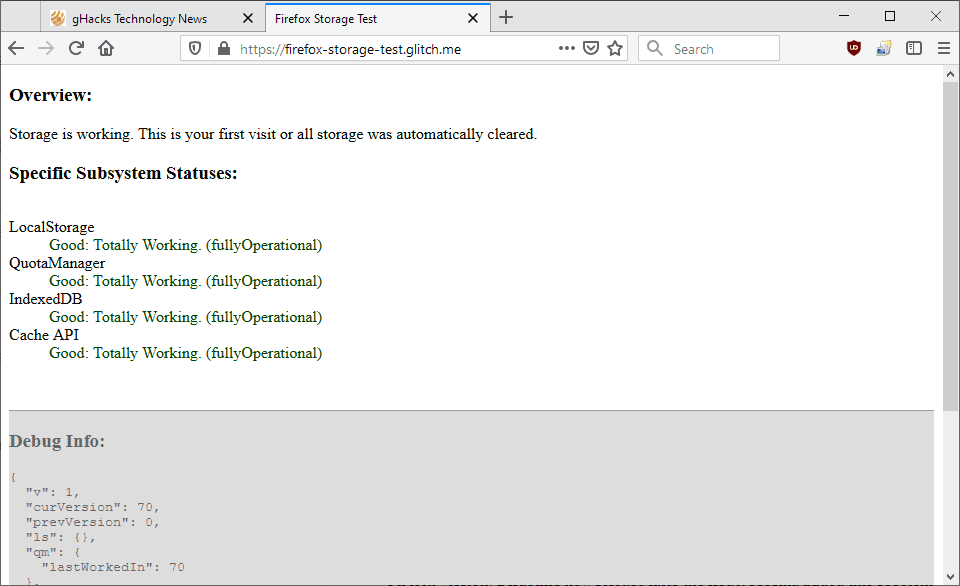 If you see “good: totally working” Firefox should not be affected by the issue; if you see something else, e.g. “investigating. If this doesn’t go away, things are unexpected broken”, it may be affected and you may want to use the workaround to mitigate the issue until Mozilla releases a permanent fix.

The bug report on Mozilla’s bugzilla bug tracking website suggests that the issue affects old profiles but not newly created profiles. The issue seems to be caused by a new storage implementation in Firefox 70 that Mozilla calls LSNG (Local Storage Next Generation).

Firefox users who are affected by the issue may mitigate it in the following way:

Reload the affected webpage in the Firefox web browser to see if the change resolves the issue. The only other option available is to create a new user profile and use it instead of the old one.

Firefox users who are not affected by the issue don’t need to do anything at this point. Mozilla has no ETA on a fix but it is likely that a fix is going to be pushed out very soon considering that it affects profiles and lots of popular sites on the Internet.

Now You: did you notice load issues in Firefox? (via Techdows)

Thank you for being a Ghacks reader. The post Firefox 70 not loading some pages or elements? Here is a fix appeared first on gHacks Technology News.