All modern web browsers support the HTML5 Geolocation API that allows sites, with the permission of the user, to get the geographical position.

Most browsers (all?) don’t indicate when a site uses the geolocation API. While it may be obvious at times, e.g. when you allow location access and a maps service focuses the map on that location, you may not know about it when it is not clear immediately.

While you could and should assume that a site uses location information once you give it permission to use the API, you may want to know when and if it uses it. 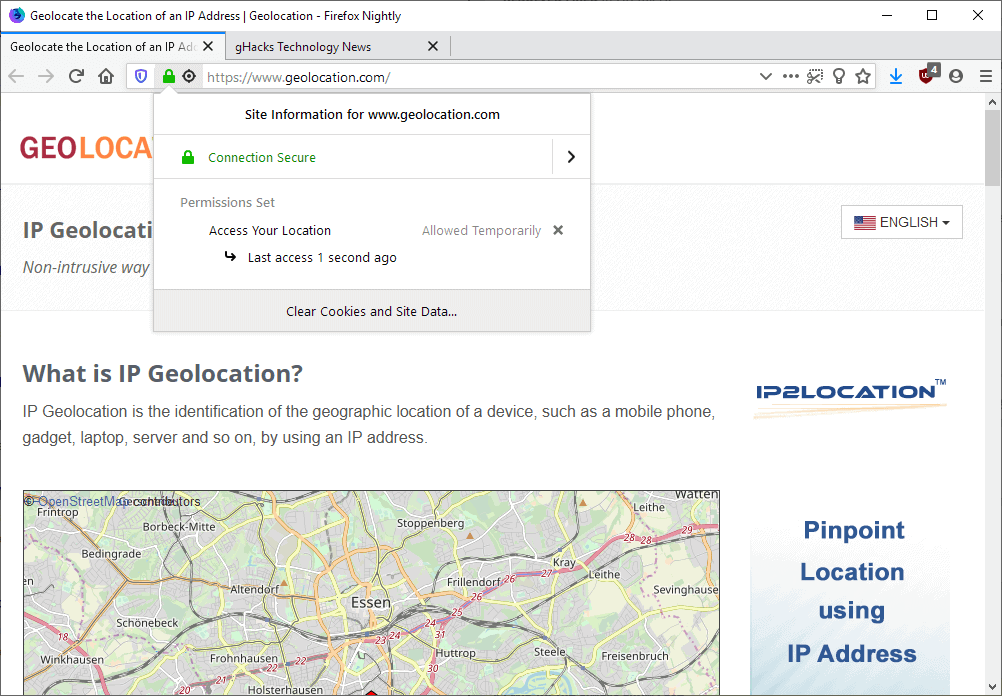 Firefox 70 includes an indicator that reveals when a site accessed the location for the last time. A click on the shield icon in the Firefox address bar displays the permissions that you gave the site in question. If you gave it permission to access location data, you will see the last access listed there underneath the permission.

The bug listing on Mozilla’s bug tracking website dates back nine years. Mozilla wanted to better visualize the use of location by sites in Firefox to indicate the use of the API permanently for as long as the permission was granted.

Firefox 70 displays an icon in its address bar to indicate use of the location API; previous versions of the web browser display no icon which means that users don’t see directly whether they have given a site (temporary) location access.

It is a small change but it improves visibility of the permission significantly in the web browser.

Firefox 70 is scheduled for a release on October 23, 2019 if the schedule is not changed. The next stable version of the Firefox web browser is Firefox 69 which is scheduled to be released on September 3, 2019.

Firefox users can disable the geolocation feature entirely in the web browser.

Ghacks needs you. You can find out how to support us here (https://www.ghacks.net/support/) or support the site directly by becoming a Patreon (https://www.patreon.com/ghacks/). Thank you for being a Ghacks reader. The post Firefox 70 shows an indicator when geolocation has been used appeared first on gHacks Technology News.