Several add-on developers criticized Mozilla in 2015 when the maker of Firefox revealed that it would drop the classic Firefox add-ons system to replace it with a new system based on WebExtensions. That switch happened with the release of Firefox 57 in 2017.

One of the developers was Nils Maier who maintained the popular download add-on DownThemAll. We reviewed DownThemAll in 2013 for the first time and found it to be an excellent extension to mass-download items on websites.

The extension would parse webpages to display links, pictures and media, and other download options to the user when run. Firefox users could use it to download all images, archives, audio files, or any other type of file from sites with a simple operation.

Maier criticized Mozilla for making the switch when WebExtensions API were not mature enough or even available; an extension like DownThemAll would be severely feature-limited and the decision was made not to port the extension.

Extensions like Download Star were created in the meantime that supported some of the functionality of DownThemAll but they too are limited by WebExtension APIs.

The developer published the source code of the WebExtensions version of DownThemAll on GitHub recently stating that the release of a beta version is just around the corner. 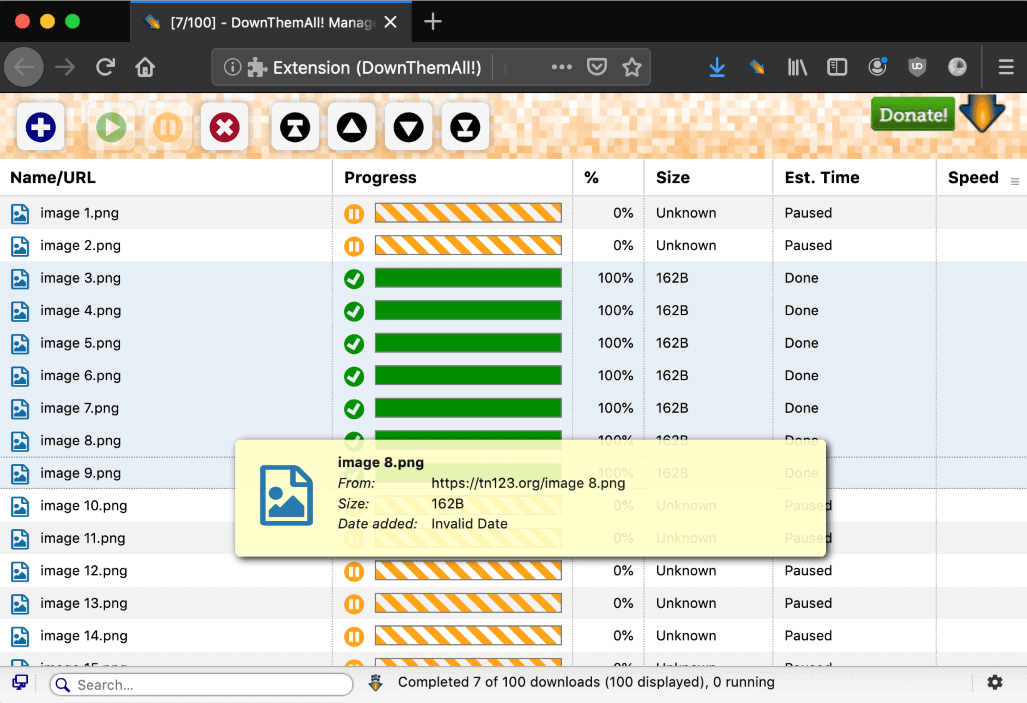 What this furthermore means is that some bugs we fixed in the original DownThemAll! are back, as we cannot do our own downloads any longer but have to go through the browser download manager always, which is notoriously bad at handling certain “quirks” real web servers in the wild show. It doesn’t even handle regular 404 errors.

The To-Do list, sorted into priorities, highlights upcoming features and features that cannot be implemented because of limitations.

Chrome support is planned, as is localization support, support for drag and drop operations, importing and exporting, or download priorities.

The WebExtensions version supports selecting and downloading multiple files from webpages using filters and other tools to aid in the process.

What we can do and did do is bring the mass selection, organizing (renaming masks, etc) and queueing tools of DownThemAll! over to the WebExtension, so you can easily queue up hundreds or thousands files at once without the downloads going up in flames because the browser tried to download them all at once.

The WebExtension version of DownThemAll supports the core functionality of the legacy version for the most part but will lack lots of features that made DownThemAll one of the most popular Firefox add-ons. Fans and long-time users of the add-on will give it a try probably regardless of that.

Now You: What is your take on the development?

Ghacks needs you. You can find out how to support us here (https://www.ghacks.net/support/) or support the site directly by becoming a Patreon (https://www.patreon.com/ghacks/). Thank you for being a Ghacks reader. The post Firefox add-on DownThemAll makes a comeback appeared first on gHacks Technology News.