The respected Firefox add-on developer Quicksaver announced yesterday that he won’t update any of his extensions anymore because of Mozilla’s decision to move to WebExtensions exclusively.

Quicksaver, responsible for add-ons such as Tab Groups, OmniSidebar, FindBar Tweak, Beyond Australis and Puzzle Bars, had four of his five add-ons for Firefox featured by Mozilla in the past.

If you open any of the author’s add-on pages on the Mozilla Add-ons repository, you will notice an important announcement on the page.

It reads: IMPORTANT: The add-on will not receive any more updates and will stop working by next November with Firefox 57.

The add-ons won’t work anymore when Firefox 57 comes along (the first version of the browser said to be WebExtensions exlusive). 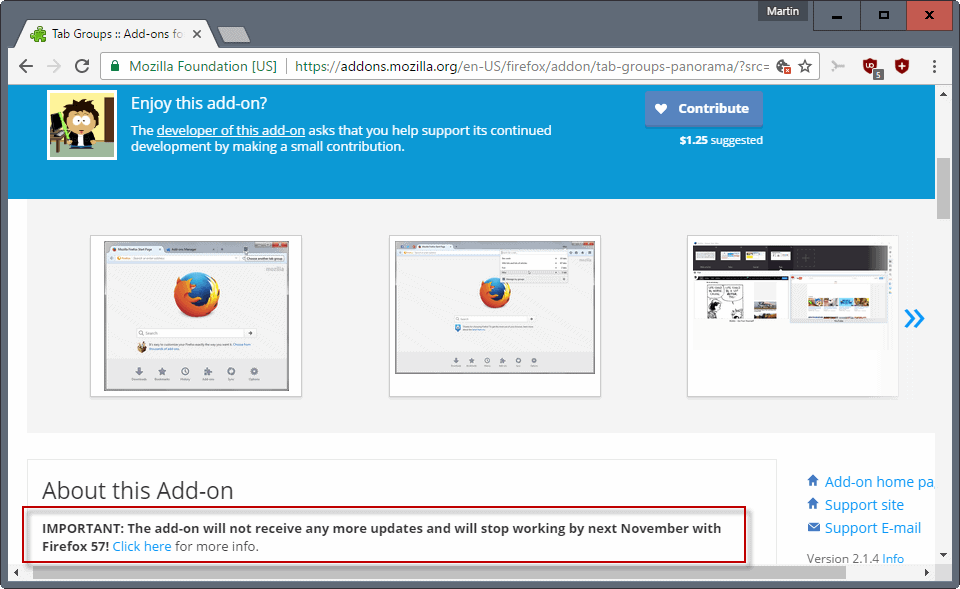 The author’s add-ons are:

Quicksaver posted an explanation on his website that reveals why he made the decision to stop add-on development.

There are several reasons, but the core reason given is that at least four of his five add-ons rely heavily on functionality that will either not be provided by WebExtensions, or would require him to rewrite the extension almost completely.

However, manipulation of the browser window’s interface and functionality will be extremely limited by definition, and even if it wasn’t, the implementation of such abilities is nearly impossible to achieve in WebExtensions.

According to the explanation, Quicksaver was in contact with Mozilla to find a way to keep his extensions alive, but failed ultimately.

I have fought for keeping the current system working together with WebExtensions, not only to keep all of my add-ons alive, but also because I believe a can-do-whatever-you-want extension system like exists today is the best quality Firefox has over other browsers. Unfortunately I’ve failed to convince them of this, as have they failed to convince me of the benefits they expect to achieve with a WebExtensions-only system.

Another point that the author makes is that he went through the ordeal of rewritting his extensions not too long ago. When Mozilla announced multi-process Firefox, he rewrote the extensions to make them compatible with it.

It was clear from the beginning that the move to WebExtensions will leave add-ons and authors behind. While Mozilla plans to make WebExtensions in Firefox more powerful than in Chrome, they will never be as powerful as Firefox’s current add-on system.

Quicksaver is not the only author who announced that he will stop working on add-ons for Firefox. Add-ons like New Tab Tools, Classic Theme Restorer, Tree Style Tabs, Open With, DownThem All, KeeFox and many others are likely also not going to make the cut.

Firefox will lose good functionality because of this, something that probably won’t ever come back once the move to WebExtensions is finalized.

Mozilla Firefox will gain support for the bulk of Chrome extensions, and while that is a good thing, they cannot fill the gap that the move to WebExtensions will cause.

Mozilla’s timing on this one is off in my opinion. The organization could keep the old add-on system alive, at least for a bit longer, until WebExtensions are more capable. The whole ordeal feels rushed to me.

Now You: What’s your take on the development?