Play/Pause is a useful browser extension for the Firefox web browser that adds a pause option to Firefox tabs that have HTML5 media playing in them.

Firefox, like most modern browsers, displays an option in its tab bar to mute audio that plays in a tab in the browser. That’s quite handy on its own, but activating mute does not block playback on the site.

Not a big problem if you are listening to Internet Radio, but if you want to listen to something from the beginning to the end, you end up having to rewind to continue playback at the position that you activated mute on. 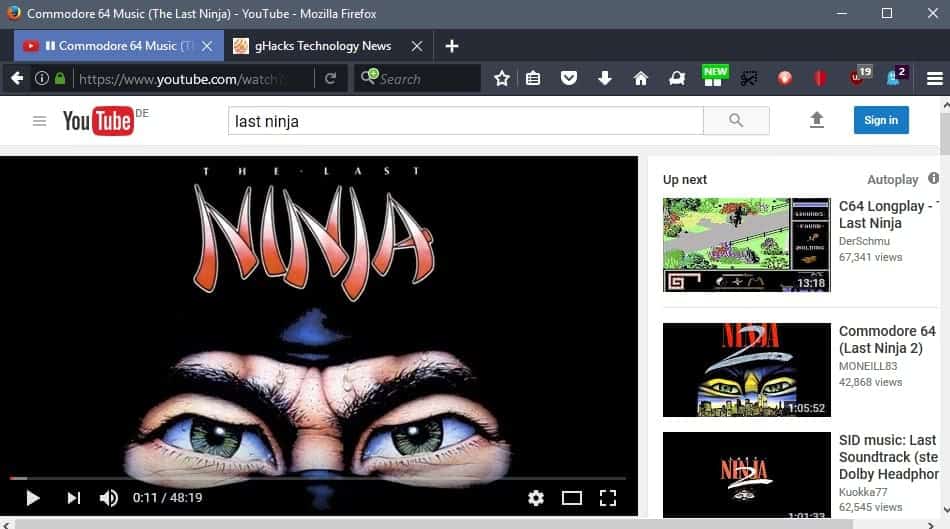 Activating play or pause does not switch to the tab which means that you can use it to control playback on inactivate tabs in the Firefox browser.

The extension is compatible out of the box with popular video, audio and streaming sites such as YouTube, Vimeo, Spotify, Pandora, Google Play Music, VK, Amazon, Twitch or Ted Talks.

You may enable support for all embedded HTML5 media to extend support to sites that are not explicitly mentioned by the add-on’s description.

You may furthermore change the following options in the settings:

Play/Pause is a very handy extension for the Firefox web browser that gives you full control over HTML media playback in any tab. It adds controls to toggle playback to tabs, so that you can control playback without having to activate these tabs first. This is especially handy for users who like to play audio in the browser (either directly or by listening to the audio of videos) while doing something in the browser at the same time.

The extension is not a WebExtension unfortunately. It is unclear whether it will be ported.

Now You: Which audio/video sites do you use the most?