Unbranded Firefox versions are created specifically for developers to test their add-ons in without having to get development versions signed.

Mozilla introduced add-on signing some time ago and will make it a requirement without override in Stable and Beta starting with Firefox 48.

Firefox Stable and Beta versions cannot override add-on signing anymore which means that users cannot install unsigned add-ons in those browser versions. A switch was provided up until now to bypass this, but it will be removed with the release of Firefox 48.

Firefox ESR, Developer and Nightly editions ship with the override so that unsigned add-ons can be installed.

This posed a problem for add-on developers who wanted to test add-ons in development against Stable and Beta versions of Firefox. Simply speaking, with the restriction in place, they could not do so anymore without getting the development version signed first.

This however is not practicable for a number of reasons. First, any new version, and there are usually plenty during development, would have to be signed. Second, add-on signing adds to the development time.

Mozilla announced unbranded builds of Firefox some time ago to remedy that issue. Recently, very early builds were made available. 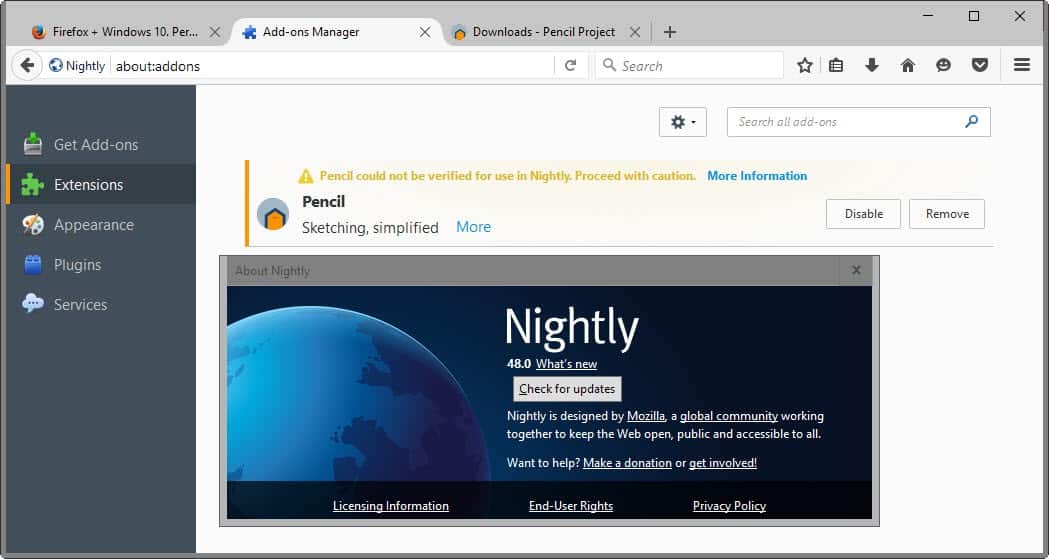 The official Extension Signing page lists download links for unbranded Firefox builds.  Currently, only beta builds and development releases are available, but the first unbranded stable version of Firefox will be made available on August 2 when Firefox gets updated to version 48.

Unbranded Firefox builds are provided for all supported desktop operating systems. Mozilla suggests you create a new Firefox profile for those unbranded builds to avoid any complications.

Furthermore, a bug plagues these first builds that is rather annoying if you notice it too late. Basically, it can happen that these builds are updated to release builds of Firefox automatically.

To avoid this, Mozilla suggests that you disable the update functionality for the time being until the bug is resolved:

Setting it to false prevents automatic updates. This does mean however that you need to download and install new unbranded versions of Firefox manually for the time being.

Also, unbranded builds show up as Nightly instead of Stable or Beta when you run them.

You do need to disable the add-on signing requirement in unbranded builds as well:

Setting the preference to false disables the add-on signing requirement.