Google will deprecate the Data Saver extension for desktop versions of the Chrome web browser when the stable version hits version 74; the company renamed Data Saver to Lite mode and decided to make it Android exclusive.

The company launched Data Saver in Chrome for Android in an effort to reduce page load time and bandwidth of the Chrome browser. Similarly to Opera Turbo, Data Saver pushed (some) traffic through Google servers to compress the data and speed up loading times of webpages in the process.

Google unveiled a new feature called Lite Pages in 2019 which still includes core parts of Data Saver and comes with an API that gives servers options to serve different content to users based on the connection quality. 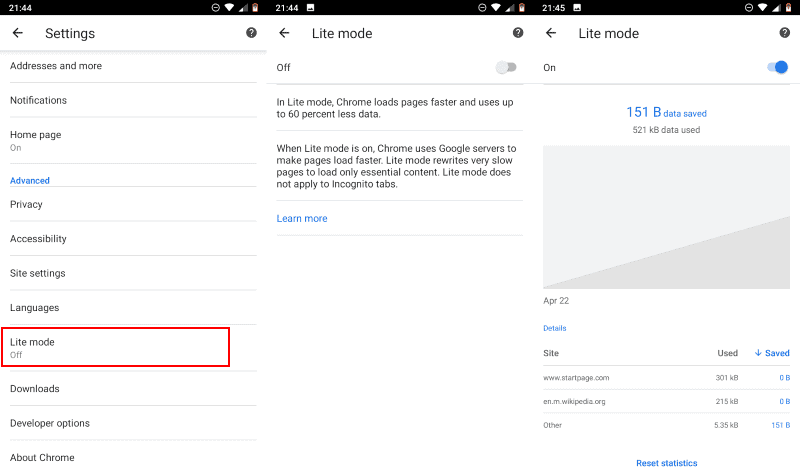 Google made the decision to rename Data Saver to Lite Mode in April 2019. Lite mode still saves up to 60% of data when it is active which results in faster page load times and reduced memory usage.

If Chrome predicts that a page will take longer than 5 seconds for the first text or image to show on screen, it will load a Lite version of the page instead

Google notes that Lite mode shares the HTTPS URL with Google but not other information such as “cookies, login information, and personalized page content”, and that Lite mode never breaks “secure connections between Chrome and a website”.

Chrome users on Android may enable the new feature by opening the Settings > Lite Mode, and setting the feature to on there by toggling it. If Data Saver was enabled previously in Chrome for Android, Lite mode is enabled automatically.

The downside to the announcement is that Lite mode is exclusive to Google Chrome for Android. Google plans to deprecate the Chrome Data Saver extension for desktop versions of Chrome in Chrome 74 which is out now. In other words: there won’t be any official option to use Data Saver or Lite Mode on the desktop, at least not in the foreseeable future.

The Data Saver extension brought the data saving functionality to desktop versions of the Google Chrome web browser. Chrome desktop users could use it to benefit from the same data saving technology that the Android version of Chrome supported.

The Data Saver extension was a good option for Chrome users who experience slow or unreliable Internet at times or regularly. The removal leaves them without such option, at least when it comes to the desktop version of Chrome.

While there is still a chance that Data Saver continues to work even after Google’s official deprecation of the extension, it is unclear for how long.

Now You: do you use Data Saver or other data saving features or extensions?

Ghacks needs you. You can find out how to support us here or support the site directly by becoming a Patreon. Thank you for being a Ghacks reader. The post Google deprecates Chrome Data Saver extension for the desktop appeared first on gHacks Technology News.