The Firefox web browser is in a bit of a moving state right now in regards to the browser’s add-on system and add-ons that are available for it.

Mozilla plans to make Firefox 57 the first version of the browser that supports only WebExtensions. WebExtensions in plain old English are very similar to Google Chrome extensions, only that the Firefox version supports more powerful add-ons than Google Chrome does once Mozilla reaches feature parity with Chrome.

Note that “plans” means that Mozilla may postpone the cut. Development may not be ready when Firefox 57 is going to be released — on November 14, 2017 if the schedule holds — or there may be other things that forces Mozilla to postpone the change.

When the change happens, legacy add-ons will become incompatible with that version of Firefox. Legacy add-ons are all add-ons that are not WebExtensions.

Tip: Legacy add-on or WebExtension? Find out if your add-ons are compatible.

Some developers have ported their add-ons to the WebExtensions format already, and those will continue to work. Others are still in the development phase, and some won’t port their add-ons for reasons such as that WebExtensions don’t support the functionality of the add-on, or of time commitments.

It is difficult to assess the situation right now, as WebExtensions functionality is still being worked on. It is unclear right now for instance if Firefox users will end up with thousands, or more than ten thousand extensions after the switch.

We tried to shed some light in Top Firefox Add-ons and their WebExtensions status, but even with very popular add-ons, it is sometimes not possible to tell whether they will remain compatible after the switch.

As far as the overall number of WebExtensions compatible add-ons is concerned: there is no definitive number, but you can get an approximation of it.

What we know is that Firefox 57 is the release target for WebExtensions exclusivity.  So, all we have to do is filter the add-ons on Mozilla’s AMO website by a special tag to list the WebExtensions add-ons for the browser.

So, if you point your browser at https://addons.mozilla.org/en-US/firefox/tag/firefox57 you will get 2273 add-ons right now 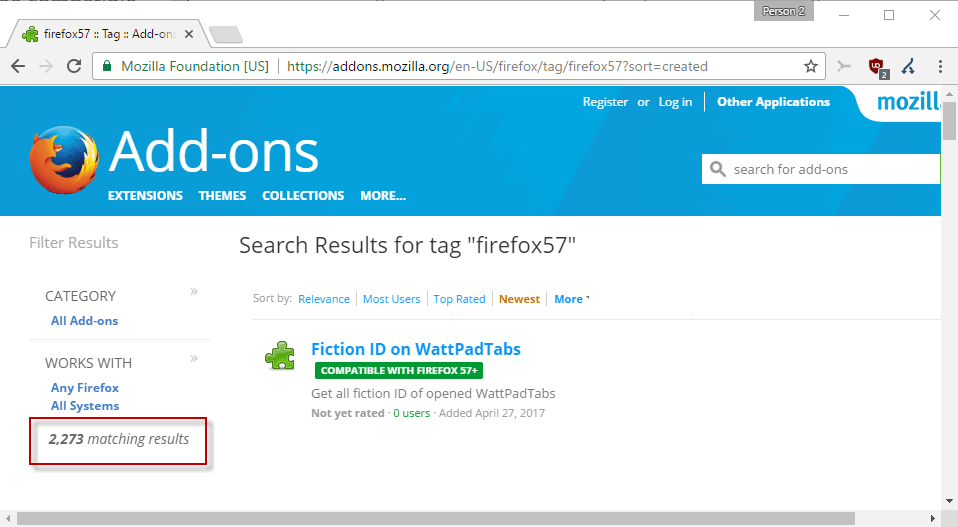 To put this into perspective: Mozilla AMO lists 18814 add-ons right now. Not all of those are compatible with the current version of Firefox, Firefox 53 at the time of writing.

A part of those add-ons will be turned into WebExtensions by their developers, or by users who forked a particular extension so that it remains available for a WebExtensions exclusive Firefox browser.

What one has to consider as well is that support for WebExtensions opens up the Chrome Web Store for Firefox. While not all Chrome extensions will work in Firefox, once Mozilla reaches feature parity, a large part will.

The post If Firefox 57 would be released today, 2273 add-ons would be compatible appeared first on gHacks Technology News.