The update had two known issues initially which Microsoft highlighted on the official Support page on the Microsoft website.

The company added a third issue to the page today that confirms that the update is causing game performance issues with certain games. Microsoft mentions Destiny 2 specifically; users may experience mouse and graphics related performance issues in other desktop games as well.

Microsoft provides no information on the cause for the issue or the types of games that are affected by it.

There is no workaround for the issue right now and Microsoft appears to be working on a solution.

Microsoft suggests that gamers who experience the issue should remove the cumulative update KB4482887 from their devices in the meantime to resolve the issue.

Gamers who have not updated Windows 10 PCs yet may want to delay the update to avoid performance related issues. Pro users may pause updates to block updates from being downloaded and installed on the device. 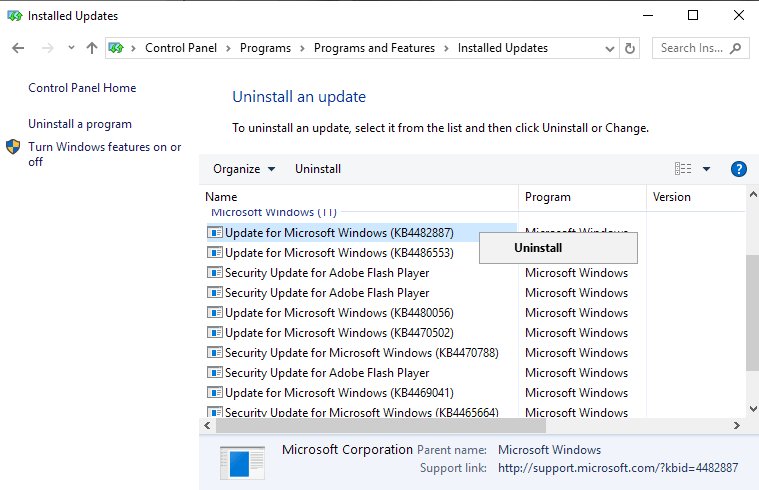 Tip: Check out our guide on uninstalling Windows Update for detailed instructions.

Here is how you remove the update using the Control Panel:

Here is how you remove the update using the command prompt:

You need to restart the PC either way to complete the uninstallation.

I don’t play that many games anymore but could not detect any performance issue while playing Dota 2 (Auto Chess) and several boardgame conversions on a PC with KB4482887.

Now You: Did you notice performance issues after installing the update?

Ghacks needs you. You can find out how to support us here or support the site directly by becoming a Patreon. Thank you for being a Ghacks reader. The post KB4482887 for Windows 10 1809 causes game performance issues appeared first on gHacks Technology News.