If you have installed the latest round of cumulative updates for Microsoft’s Windows 10 operating system, you may have noticed that some official government sites in the UK are no longer accessible in Internet Explorer or Microsoft Edge.

Microsoft released security updates for all supported versions of Windows 10 on Tuesday on the company’s monthly Patch Day. On Thursday, Microsoft added a known issue to the update KB4494441  for Windows 10 version 1809 revealing that it may install twice on some user devices. 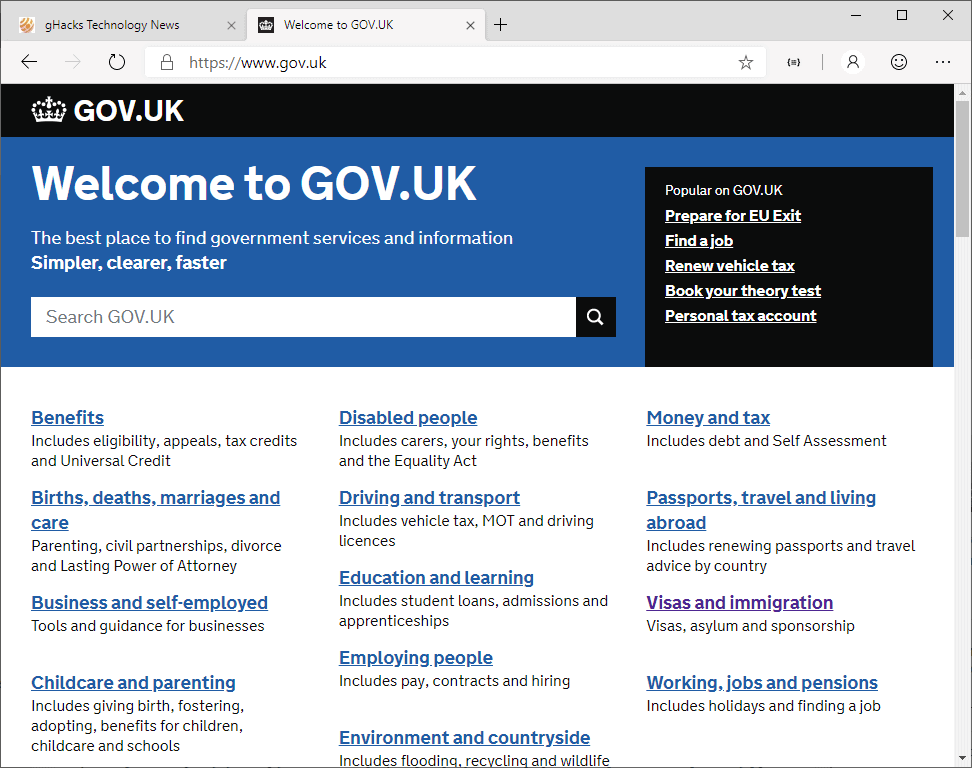 Today, another issue was added to the list of known issues; this time, for all updates for Windows 10 released on the May 2019 Patch Day.

After installing the May 14, 2019 update, some gov.uk websites that don’t support HTTP Strict Transport Security (HSTS) may not be accessible through Internet Explorer 11 or Microsoft Edge.

One of the changes in the released updates added gov.uk to the HTTP Strict Transport Security Top Level Domains (HSTS TLD) for Internet Explorer and Microsoft Edge.

While that improves security when connecting to these sites, it breaks gov.uk sites that don’t support HSTS.

Microsoft notes that it is working on a resolution for the issue and plans to release an update quickly to resolve the issue in all supported versions of the operating system.

Windows 10 users who run into the problem may want to use a different web browser to access these government sites in the meantime as the issue affects Internet Explorer 11 and Microsoft Edge only. If that is not possible and access to these sites is essential, it is only possible to uninstall the cumulative update to resolve the issue.

The number of broken UK government sites is unknown but it is important enough for Microsoft to add it to the list of known issues. The latest issue highlights again that Microsoft’s approach to testing and verifying updates needs to be improved.

Did Microsoft generate a list of uk.gov websites and test connectivity to those in IE and Edge?

Ghacks needs you. You can find out how to support us here (https://www.ghacks.net/support/) or support the site directly by becoming a Patreon (https://www.patreon.com/ghacks)). Thank you for being a Ghacks reader. The post Latest Windows 10 updates break access to some UK Government websites appeared first on gHacks Technology News.