A report on the Italian site HTNovo suggests that Microsoft added 11 domains to a blacklist on the company’s official Answers support site.

While it is not uncommon for forums to block certain sites, e.g. sites that are malicious in nature or problematic in other ways, it is a rare occurrence that legitimate sites get blocked on official forums.

The reporting site reveals that www.cleaner.com is one of the domains but does not reveal the remaining ten domains that Microsoft blacklisted as well. According to HTNovo, the remaining ten sites fall in the download or information category.

A quick test on the Microsoft Answers forum confirms that the domain ccleaner.com is changed automatically to **** when a post is published or edited. It does not matter if a protocol or www is used or not, the domain is always changed when the post is submitted or edited.

Affiliated users, moderators and site administrators, may still post the domain name in question though. Users could bypass the blocking by using link redirection services. 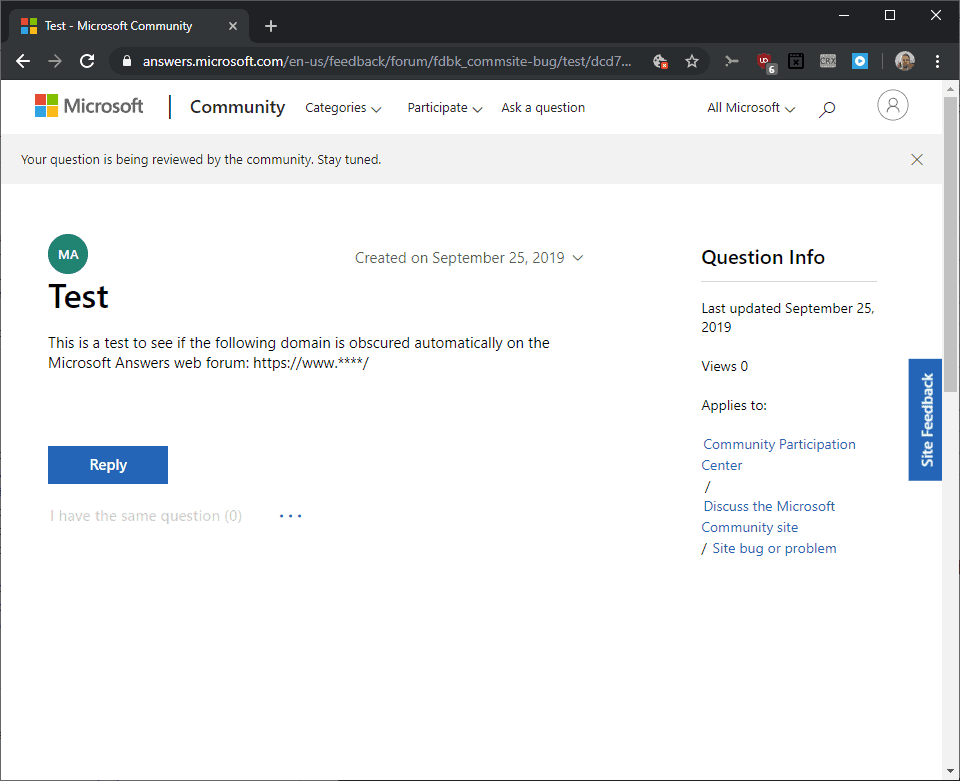 Why CCleaner? HTNovo’s blog post does not tell, only that Microsoft informed moderators on the forum about the blacklist filter.

One possible explanation, and HTNovo seems to hint at that possibility, is that CCleaner may be used for good and bad. In other words, the software may cause issues on Windows systems and that may lead to additional support requests on the official forum.

Even the cleaning of temporary data may cause issues on the user’s end as it may remove data such as cookies that users may prefer to keep to avoid having to sign in to sites and services on the next visit.

Piriform, maker of CCleaner, was acquired by Avast in 2017. It became known shortly thereafter that the software’s distribution system had been compromised. The software is still bundled with software, e.g. Avast Free Antivirus in 2017 and nowadays CCleaner Browser, which caused issues of their own for users.

It seems improbable that the bundling or any of the privacy issues caused Microsoft to blacklist the domain on its Answers forum.

The CCleaner application is not blocked by Microsoft Defender or SmartScreen at the time of writing.

Now You: What is your take on the banning of the domain? (via Deskmodder)

Ghacks needs you. You can find out how to support us here (https://www.ghacks.net/support/) or support the site directly by becoming a Patreon (https://www.patreon.com/ghacks/). Thank you for being a Ghacks reader. The post Microsoft blocks official CCleaner domain on its Answers site appeared first on gHacks Technology News.