Windows Insiders have had several options until now in regards to new builds called Release Preview, Slow, Fast and Skip Ahead. The main idea with these different rings was to provide organizations and technically interested users with options to test different development versions of the operating system.

Things got complicated in 2019 when Microsoft mixed and matched rings and builds which at least partially was caused by the “not really a feature update” release that Microsoft plans to release in November 2019. 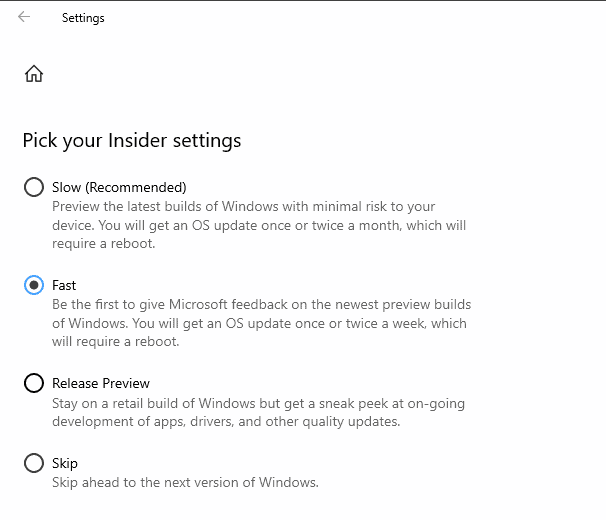 Starting with the release of the Windows 10 Insider Preview Build 19018, Skip Ahead configurations will be migrated to the Fast Ring automatically. Skip Ahead will be removed from the Insider settings of the Windows 10 operating system and the ring won’t be offered anymore to Insiders to sign-up for.

Starting today, Windows Insiders who have opted into Skip Ahead are being migrated back into the Fast ring. This means that Skip Ahead will no longer be reflected under Settings > Update & Security > Windows Insider Program. Going forward, we will not be offering Skip Ahead as an option for Insiders to sign-up for. Our goal is to provide everyone in the Fast ring the freshest builds at the same time.

Going forward, the newest builds will be released to the Fast Ring. It is unclear at this point whether that could mean that Fast Ring builds may skip ahead as well.

Microsoft provides no reason for making the change. Maybe it has been done to reduce the number of future feature leaks (and the disappointment that goes along when these don’t make it into a new version of Windows 10), or to improve the manageability of public builds.

Now You: What is your take on the decision?

Thank you for being a Ghacks reader. The post Microsoft ends Skip Ahead Windows Insiders ring appeared first on gHacks Technology News.