Mozilla will release Firefox 58.0.1 in the coming 24-hour period to address a critical issue on Windows machines that causes page load failures in the browser.

The update is out . You can run manual checks for updates in Firefox by clicking on the menu icon and selecting Help > About Firefox from the menu that opens.

Users who prefer to download new versions instead can do so on the Mozilla website after the release as well. 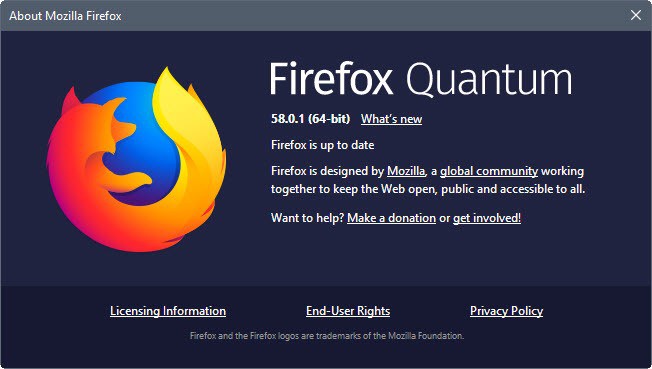 The preliminary release notes list one issue as fixed in Firefox 58.0.1.

Bug 1433065, Firefox 58 is not loading any pages (including about: pages), is the main tracking bug for the issue. The user who opened the bug on Bugzilla describes the issue as Firefox not loading any web pages, including local ones, and showing a white background instead.

The number of users affected by the issue is unclear but it appears to be large enough to warrant a bug fix release.

Firefox 58.0.1 has two unresolved issues which affect Firefox 58.0 as well:

Now You: are you affected by the issue?