Mozilla released Firefox 70.0.1 on October 31, 2019 to the web browser’s stable channel. The new Firefox version addresses several issues including a major issue that caused some pages or page elements to fail to load in the browser.

Firefox 70.0.1 should be offered to users of the browser automatically thanks to the web browser’s built-in automatic updating system. Firefox users may speed up the upgrade by selecting Menu > Help > About Firefox.

Firefox displays the current version of the browser in a popup on the screen and queries Mozilla servers to find out if an update is available. The update is downloaded and installed automatically on most machines if it is discovered.

The new version can also be downloaded from the official Mozilla website directly. 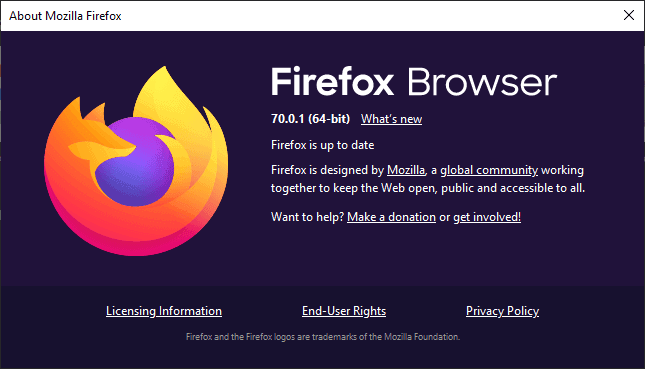 The official Firefox 70.0.1 release notes list three issues that have been fixed.

The main issue addresses the page load issue in Firefox 70.0 that Mozilla detected after the release of the web browser to the stable channel. Some websites and web pages would fail to load under certain circumstances.

The release of Firefox 70.0.1 fixes the issue; Firefox users who applied the workaround on their machines may undo it by setting the preference dom.storage.next_gen to TRUE on about:config.

The two other issues that Firefox 70.0.1 fixes are the following ones:

Mozilla released a patch relatively quickly after becoming aware of the page load issue in the new version of Firefox. Firefox users who experience the issue are encouraged to update their browser to the new version to resolve it.

Now You: Were you affected by the issue?

Thank you for being a Ghacks reader. The post Mozilla Firefox 70.0.1 release information appeared first on gHacks Technology News.