Mozilla announced just a moment ago that it has improved the CSS Grid Inspector of Firefox’s integrated Developer Tools significantly.

The new functionality has been added to Firefox Nightly, the cutting edge development version of the Firefox web browser that gets new features first before they migrate to Beta and then to Stable versions of the web browser.

CSS Grid Layout is a method of dividing a web page into regions, and defining relationships of elements on the page. The name grid comes from the layout’s characteristic of aligning elements into columns and rows.

While similar to tables, CSS Grid offers advantages such as the ability to overlay elements or use layers. 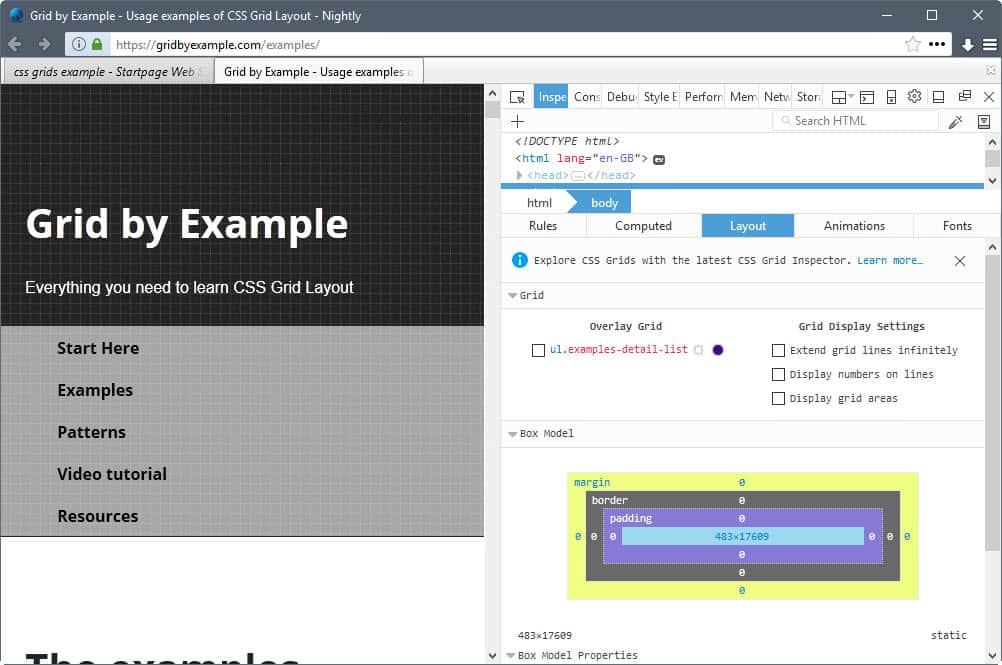 Firefox Nightly users can open the Developer Tools of the browser using the F12 shortcut. To make use of the new CSS Grid functionality, they need to open the Inspector Tool on a page that uses CSS Grid.

The Layout Panel lists all CSS Grid containers on the active page. It includes an overlay on top of that that visualizes the layout, position and layer of each container.

Firefox developers may customize the display using the following three settings that are available right now:

Another visual element that is new in the Developer Tools is the ability to hover the mouse over any container to have it highlighted for you on the page. You need to select the overlay grid first for the options to work.

Another new feature of the Grid Inspector allows developers to see where grid lines are for grids that are translated, skewed, rotated or scaled.

Mozilla added a new Box Model Properties to the Grid Inspector as well. It lists all properties that affect the position, size and geometry of the selected element.

Developers may edit some properties, the position and height/width properties directly there.

Here is a video that walks you through the new functionality.

Now You: if you are a web developer, what is your take on CSS Gird and the functionality of the Firefox Developer Tools in regards to that?