Mozilla CEO Chris Beard confirmed in an interview  that the organization plans to offer premium services in the near future.

Mozilla is aware of the organization’s dependency on search and the revenue that it brings in. About 90% of the overall revenue of Mozilla comes from search deals at the time of writing, the remaining ten percent from Pocket, donations, and other revenue sources.

Firefox Premium is an attempt to diversify Mozilla’s revenue without limiting or restricting any of the existing services.

Beard mentions a VPN service as an example of a premium service. Mozilla could offer a free basic VPN service to all of its users and a paid version with improved functionality and features on top of that.

The practice is not uncommon; several VPN providers offer a free basic version with limited bandwidth, server availability or speed, and an upgraded paid product that does away with the limits or extends them. It is unclear if the VPN service would be run by Mozilla or if the organization would cooperate with an existing provider. 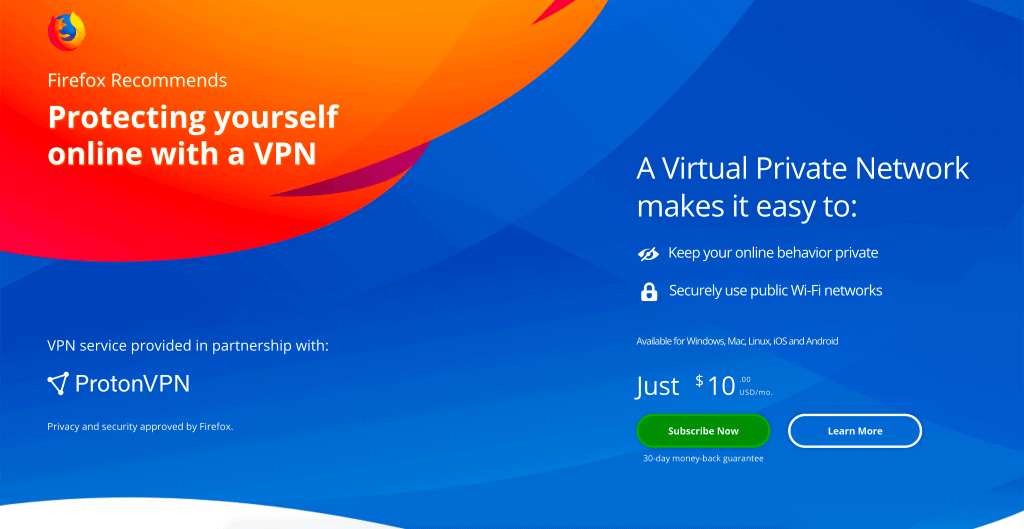 Mozilla did cooperate with ProtonVPN in the past already to offer VPN services to Firefox users.

The only other service that Beard mentions in the interview is a data storage service but no information was provided in the interview. Companies that offer data storage services often use a freemium model as well. Users may sign up and get a couple of Gigabytes of storage as free users; those that require more may pay a monthly or yearly fee to get more online storage.

Mozilla plans to launch individual services in the future. The interview suggests that the organization could launch these services for free initially and premium options later on.

Tip: Check out the best VPN add-ons for Firefox.

Firefox Premium services could launch as early as October of 2019. The services could diversify Mozilla’s revenue streams significantly. It is clear that Mozilla wants to reduce the reliance on search deals especially since the revenue depends to a large part on one of its competitors in the browser market, Google.

A Google not-renewing the search deal scenario looms over Mozilla’s head even though it is unlikely that this is going to happen. Google could negotiate with an iron fist perfectly knowing that Mozilla does not have lots of choices when it comes to search deals partners.

The only viable candidate left would be Microsoft and the company’s Bing search engine. Microsoft did make search deals in the past with companies like Yahoo or more recently Verizon.

If Mozilla gets the premium services right, it could very well establish services that surpass search revenue in the long run. The organization needs to stay true to the attributes it stands for, especially when it comes to privacy, openness, and a user-focused appraoch to things.

I don’t mind the release of premium services by Mozilla provided that core Firefox remains untouched (which it will) and that these services are reasonably priced and have a strong focus on privacy.

Now You: What is your take on Firefox Premium?

Ghacks needs you. You can find out how to support us here (https://www.ghacks.net/support/) or support the site directly by becoming a Patreon (https://www.patreon.com/ghacks)). Thank you for being a Ghacks reader. The post Mozilla might launch Firefox Premium in 2019 appeared first on gHacks Technology News.