The organization announced in January 2019 that it would shut down its Test Pilot program; Test Pilot was an experimental playground of sorts for upcoming Firefox features and extensions.

Mozilla used it to determine if certain features would be a good addition to Firefox or better suited if offered as standalone extensions. Several Test Pilot experiments, e.g. Tracking Protection or Page Shots, were integrated natively in the browser while others were offered as extensions or standalone projects.

The Firefox Test Pilot website displays a “good-bye” message when it is opened right now. Links to experiments, in fact, links to any subpage on the site, lead directly to the homepage. 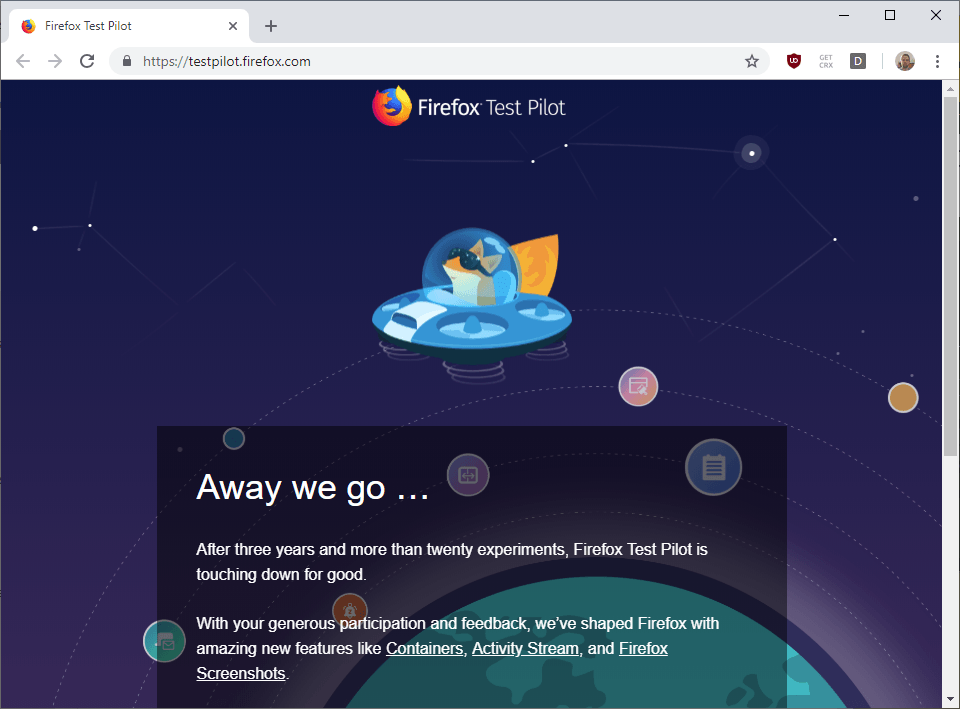 Some Test Pilot experiments were still running when Mozilla made the announcement to shut down the project. The organization promised to move these as extensions to the official Mozilla Firefox extension store, and that has just happened.

Firefox users who run the experiments already don’t need to change anything; the extensions will continue to work like they did before.

The following extensions are now available on Mozilla AMO:

Mozilla plans to publish Price Wise, a price comparison extension, as well but has not done so at the time of writing.

Now You: What is your take on the development? (via Techdows)

Ghacks needs you. You can find out how to support us here or support the site directly by becoming a Patreon. Thank you for being a Ghacks reader. The post Mozilla moves Firefox Test Pilot Extensions to Mozilla AMO appeared first on gHacks Technology News.