Mozilla announced today that it will sunset the Firefox Test Pilot program on January 22, 2019.

The organization launched Test Pilot in 2016 to test new Firefox features. Interested users could join the program to install experiments in the Firefox browser. They provided Mozilla with data in return, and Mozilla used the data to determine whether a particular experiment would be a good native fit for Firefox or better suited as an add-on.

Several Test Pilot experiments, e.g. Page Shot (which was renamed to Screenshots), Tracking Protection, or Activity Stream, were integrated natively in Firefox. Others, such as Containers or Snooze Tabs were released as extensions for the browser instead. Some Test Pilot experiments, e.g. No More 404s or Snooze Tabs  were retired without them being released as add-ons though.

Test Pilot will cease to exist on January 22, 2019. Existing experiments remain accessible on the Firefox Add-ons website. Experiments that are not available as browser extensions, Mozilla mentions Firefox Lockbox and Firefox Send, remain in active development.

The Test Pilot add-on will be removed from Firefox when users visit the Test Pilot website on January 22 or later.

Why is Mozilla retiring Test Pilot? 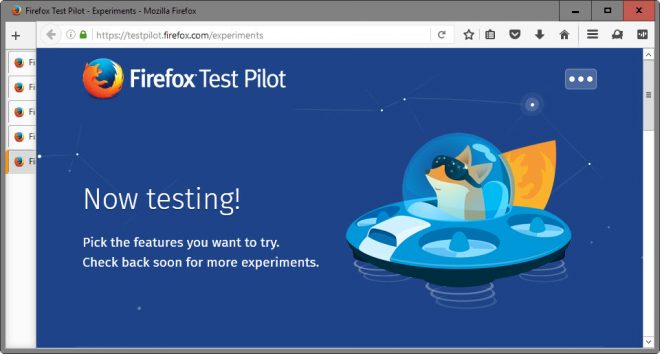 Mozilla states that “Test Pilot performed better” than it could “have ever imagined”. It sounds contradictory at first that the organization would retire a successful project.

Test Pilot was created to address the growing need to test and release new features quickly to the market. Instead of integrating new features in the browser directly through updates, something that could backfire phenomenally at time, new features were made available to users through the program for testing.

It was a win-win; users could install new features early and Mozilla got data to make better decisions about how to proceed.

The Test Pilot team was a small project team; each graduation required resources to develop and maintain the product further, and that meant that the team had less prototyping time since most experiments could not be handed over to other teams at Mozilla.

Screenshots, one of the biggest successes of the Test Pilot program, took three engineers and a designer off the team when it graduated.

Adding new team members to Test Pilot would resolve the issue, but that was not practicable for a number of reasons. The announcement is a bit vague on that but it seems to come down to financing and personnel.

I liked Test Pilot a lot; it provided interested users with options to test new features and provide Mozilla with feedback. Test Pilot was the place to go for experiments; Mozilla Labs could become the new home for experiments.

It is clear, however, that Mozilla needs to create a central hub for experiments to inform interested users about experiments.

Now You: What is your take on the retiring of Test Pilot?

Ghacks needs you. You can find out how to support us here or support the site directly by becoming a Patreon. Thank you for being a Ghacks reader. The post Mozilla puts Firefox Test Pilot program to rest appeared first on gHacks Technology News.