Mozilla Corp. acquired the Read-It-Later service Pocket in 2017 and promised to turn Pocket into an Open Source service to address criticism and reservation that some users had towards the service.

Mozilla did not reveal its primary motivation for acquiring the service; a likely explanation is that the organization wants to boost its content discovery service for Firefox by leveraging Pocket’s vast content database and existing user base.

Pocket users can save articles that they stumble upon on the Internet to Pocket. They can read these items at a later point in time. It works a bit like bookmarking in this regard but with the difference that the articles can be read directly on any supported device, even without Internet connection.

Mozilla did integrate Pocket in Firefox natively in 2015 but that did not sit well with part of the browser’s userbase. Pocket was a proprietary service back then, and many users felt that Mozilla was not straight up with them when it came to the integration. There were other issues with the service, for instance, that users had to become active to disable Pocket, or that Pocket was available as an add-on previously that users of the service could use instead.

It did not help that it became known later that Mozilla had entered a revenue share agreement with Pocket.

Pocket is integrated into Firefox in several ways already. Pocket recommendations may be displayed on the browser’s new tab page, and the browser’s address bar features a “save to Pocket” button prominently. 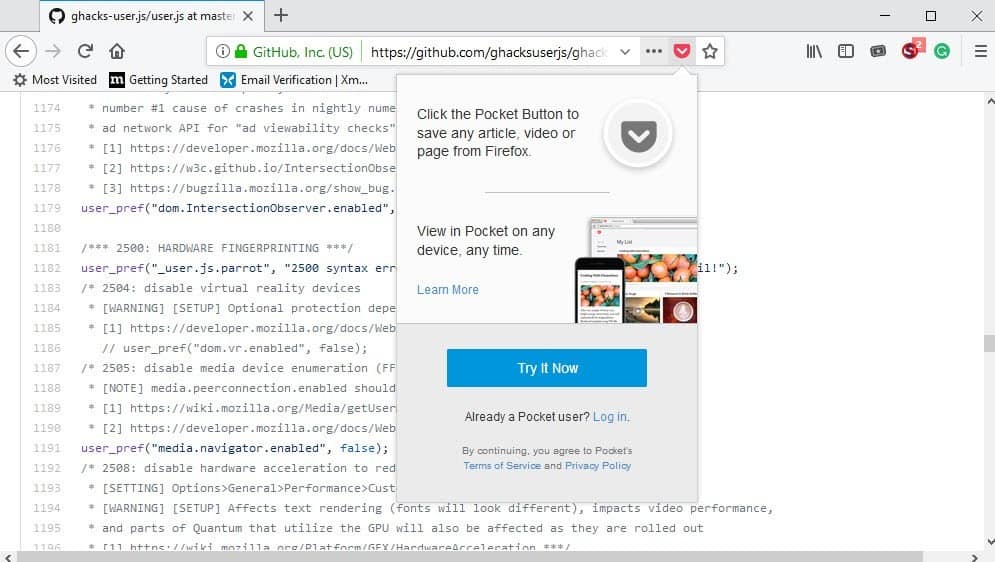 Mozilla published some of Pocket’s source code already on GitHub. Interested users can head over to the main repository to access the various bits there. The release is not complete yet as the server-side code is not released yet.

Still, it is a first step that could convince Firefox users who did not like the proprietary nature of Pocket to give the service a try. Mozilla plans to turn Pocket into an open source application to increase trust and maybe also to get other developers on board. (via Sören)