Google revealed some time ago that it was working on a new Extensions Manifest file for the Chrome web browser. The company published an early draft of the Manifest v3 file and it turned out that some extension developers were not particularly happy with some of the changes.

Developers spoke out against some of the planned changes as it could be the end for content blockers such as uBlock Origin and others. Google wanted to limit an API that content blockers and other extensions were using for the blocking and replace it with another API that had severe limitations.

Google changed some parameters in an updated version of the draft in June but planned to launch the change in development versions of Chrome in 2019.

One question that many users had was whether other browser developers would follow Google’s implementation. Browsers based on Chromium share code with Google and if Google would implement the changes, would need work to make changes to the code. Most browser makers, Vivaldi, Brave or Opera, have stated openly that they would find ways to lift these changes in one way or another.

Mozilla, the organization behind Firefox, is not based on Chromium but the extension system that Firefox uses is designed to be compatible for the most part with Chrome to make it easier for developers to develop extensions for both browsers. 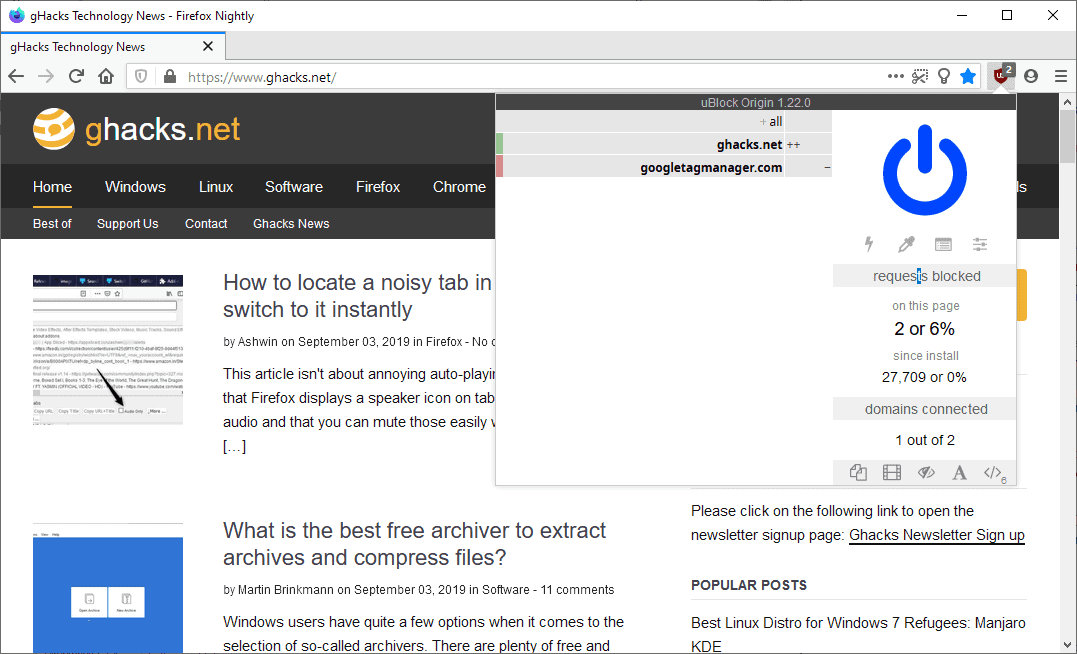 The organization published an official statement on of the Mozilla Blog today to clarify its stance on the upcoming Manifest v3 APIs.

Most important from a user perspective is that Mozilla won’t remove the API that content blockers use today from Firefox. Mozilla uses remove in the context whereas Google plans to alter it so that it becomes read-only; while not entirely clear, I think that Mozilla’s statement means that it won’t touch the API for now.

We have no immediate plans to remove blocking webRequest and are working with add-on developers to gain a better understanding of how they use the APIs in question to help determine how to best support them.

Note that Mozilla uses the term “no immediate plans” which means that the organization won’t close that door completely.

Mozilla plans to implement some of the other changes that Google plans to make. You can read about those on the Mozilla Blog.

Manifest v3 has not been published as a final version and it is too early to tell how this will play out in the long run. Will Google make the changes necessary for content blockers to run effectively on Chrome? If that is the case, it is quite possible that Mozilla would follow Google’s implementation after all in this regard.

If Google plays hardball, the company relies on advertising revenue after all, it seems more likely that Mozilla won’t follow Google’s implementation to the letter or at all. Mozilla wants to work with extension developers; that is a good sign.

Now You: What is your take on the statement?

Ghacks needs you. You can find out how to support us here (https://www.ghacks.net/support/) or support the site directly by becoming a Patreon (https://www.patreon.com/ghacks/). Thank you for being a Ghacks reader. The post Mozilla won’t follow Google in limiting APIs in coming Extensions Manifest v3 appeared first on gHacks Technology News.