The initial version of OnionShare launched in 2017 for Windows, Mac OS X, and Linux. It featured options to share files anonymously using the Tor network using a simple but effective interface.

OnionShare connects to the Tor network when you launch it; this should happen automatically. The application displays the settings if the connection attempt is unsuccessful so that you may change connection related preferences and try the connection again.

The main interface has been updated visually and functionality-wise. 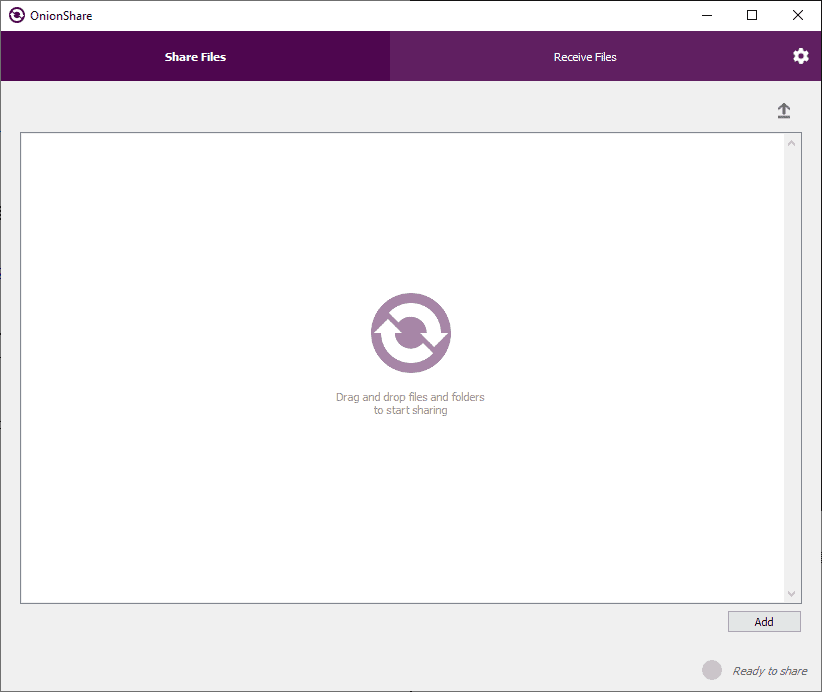 You may drag and drop files or folders that you want to share or use the add button instead. Another option provided right there is to switch to the “receive files” tab to enable receive mode. Enabling the mode gives other users options to upload files to the system OnionShare 2 is run on.

The application displays an address that these other users need to use to send files to the device.

Sharing works the other way round. Activate the “start sharing” button once you have added one or multiple files that you want to share. 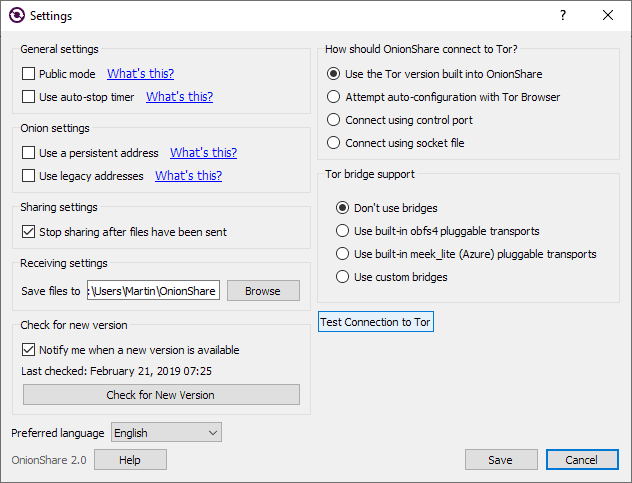 Contacts need to use the Tor browser or other Tor programs to load the address and download the files. The application stops the sharing automatically after the files have been downloaded once. You may stop the behavior in the options by removing the checkmark from “stop sharing after files have been sent”.

The program indicates that you are sharing files. You may click on the transfer button to display the transfer history.

OnionShare 2 supports a number of extra features that extend the functionality significantly. One of the new features is public mode which you enable in the preferences.

Public mode complements receive mode when you disable the “stop sharing after files have been sent” option. OnionShare 2 uses a security feature that disables the server automatically when it identifies 20 attempts to guess the two-word passphrase of the address.

Say you tweet the address to share files permanently. Anyone could simply attack the sharing by trying different passphrases in the end to force the server to turn off itself after 20 invalid attempts. Public mode ignores these and makes sure that the server stays online.

Another new feature is the option to run an anonymous dropbox. The mode works similarly to receive mode but you use a persistent address for it. Check the option in the preferences to make sure that the address does not change between sessions.

You could run this on a server, e.g. a headless Linux server, so that anyone may upload files to it at any time of the day.

Ghacks needs you. You can find out how to support us here or support the site directly by becoming a Patreon. Thank you for being a Ghacks reader. The post OnionShare 2 released: Tor-powered file sharing appeared first on gHacks Technology News.