ScrollAnywhere is a browser add-on for the Firefox web browser that adds several new scrolling options such as grab and drag scrolling or scrolling without using the scrollbar to the browser.

Firefox users who use the desktop version of the web browser have a handful of options when it comes to scrolling: from using the scroll bar to middle-mouse scrolling or using the keyboard to scroll a page.

Extensions are available to improve scrolling behavior or even add new scrolling options. We reviewed Grab and Drag back in 2008 which added mobile-like scrolling to Firefox and a Smooth Scrolling extension to make scrolling really soft.

Mozilla improved scrolling in Firefox over the years as well. Mozilla introduced APZ in 2015 and introduced scroll anchoring in 2019. 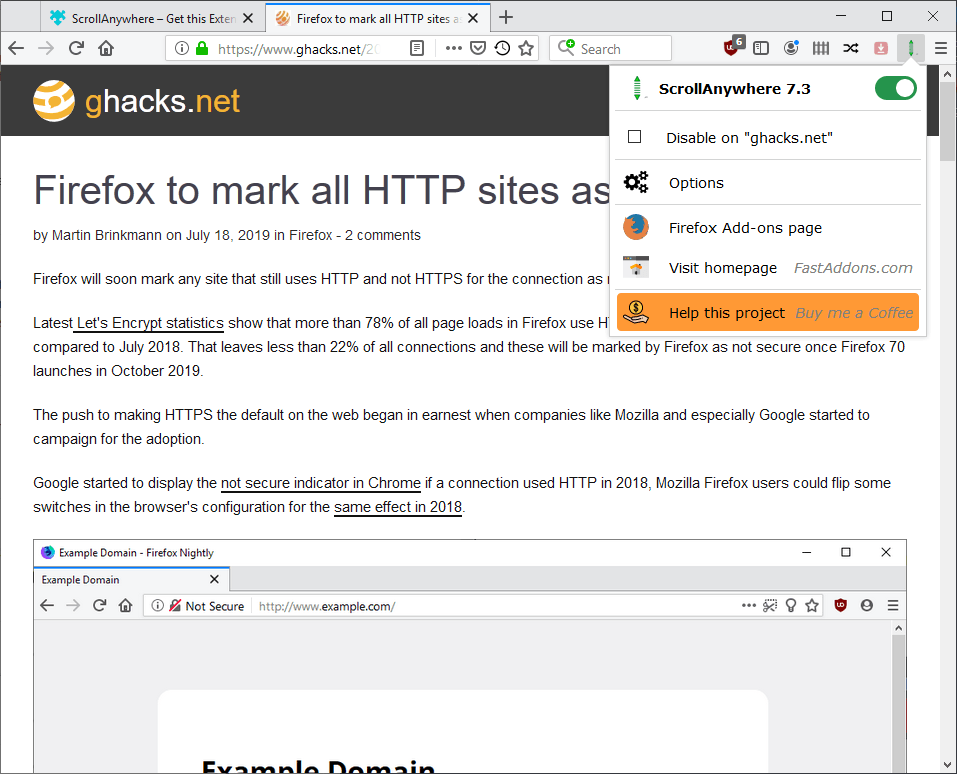 ScrollAnywhere adds powerful new scrolling options to the Firefox web browser and improves others. One of its core features adds another scroll option to one of the mouse buttons. Mapped to the middle button by default, it allows Firefox users to use just the middle button to scroll on a page.

Those that prefer right or left button may enable it to use those buttons. The default scroll style emulates the scroll bar but this too can be changed to grab and drag scrolling or dynamic speed scrolling. Grab and drag works similarly to the touch-based scrolling on smartphones and tablets.

A look in the options reveals plenty of settings to tweak. You can change the default scroll button and style there but also a significant number of other options including modifier keys to only scroll when a key is held down. 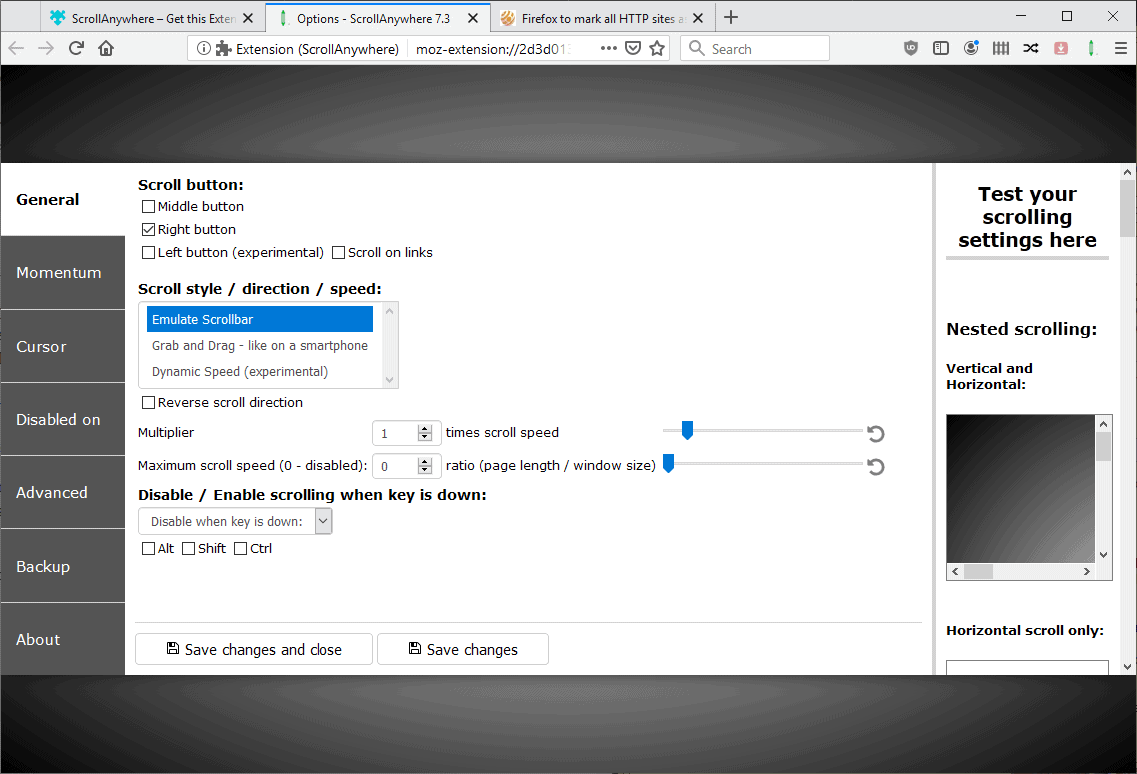 Other scrolling related options include modifying the scroll speed and multiplier, and momentum. You can disable momentum entirely if you don’t like the idea that the scroll speed changes the faster you flick the page up or down.

Users who do like the idea may customize the experience by changing the default formula and tweaking individual parameters such as page weight, maximum speed, or additional speed or duration.

The extension does not change the cursor by default for performance purposes but you may change it to one of several dozen cursors if you like that.

ScrollAnywhere users may export the configuration and import it at any time, e.g. using another profile or a Firefox installation on another system.

The author of the extension notes that it does not work on all pages and that is certainly contradicting the “anywhere” part of the name. Most of these limits are technical in nature: Mozilla prohibits extensions from working on internal pages (including PDF viewer and Reader view), the add-ons website, or other extension pages. Nothing can be done about these limitations unless Mozilla changes them or provides an option to turn them off.

ScrollAnywhere is a useful extension for the Firefox web browser that introduces new scrolling controls and options. The add-on is well designed and updated regularly by its developer.

Now you: how do you scroll? Do you use a scrolling extension?

Ghacks needs you. You can find out how to support us here (https://www.ghacks.net/support/) or support the site directly by becoming a Patreon (https://www.patreon.com/ghacks)). Thank you for being a Ghacks reader. The post ScrollAnywhere adds more scrolling options to Firefox appeared first on gHacks Technology News.