Classic Theme Restorer was developed as a direct response to Mozilla refreshing Firefox with the Australis theme release in Firefox 29.

The add-on allows Firefox users to restore many theme features that Mozilla removed and changed with the Australis launch, or introduced with it.

The extension grew quickly, and features an immense set of features and tweaks nowadays that give you control over many features of the browser. Check out 10 reasons for Classic Theme Restorer to find out more about the add-on’s functionality.

The death of Classic Theme Restorer for Firefox 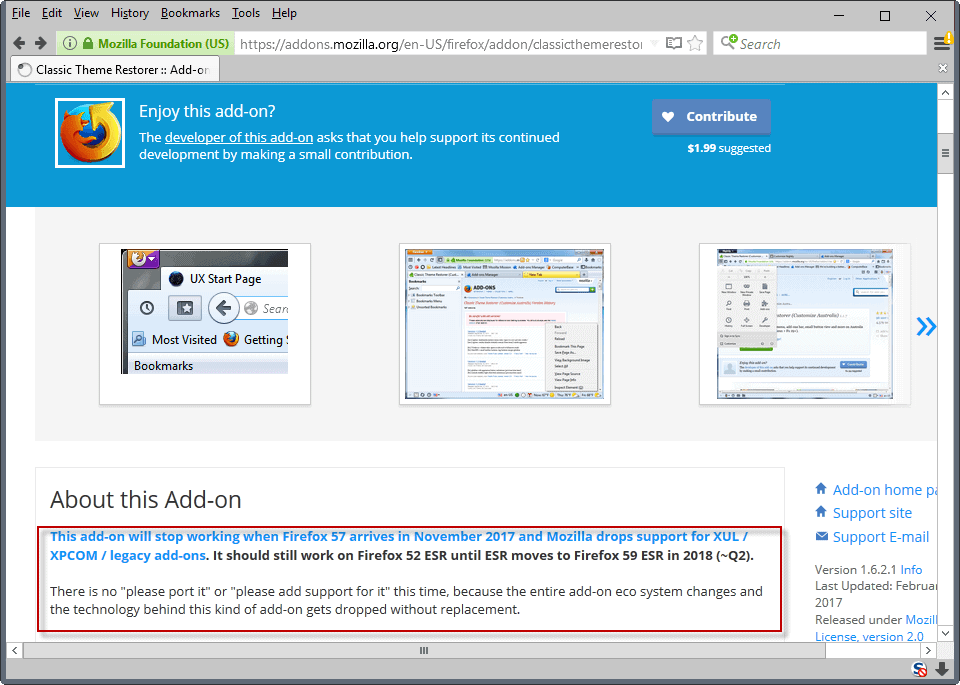 Back in November 2016, we suggested that Classic Theme Restorer might be dead once Mozilla makes the full switch to WebExtensions exclusively in Firefox.

We based this on posts by Aris, the developer of the add-on who stated that the extension will be dead by the end of 2017. Reasons given at that time were that Mozilla had not come up with WebExtension APIs that would allow the add-on to be ported, and then continued as a WebExtension.

If you check out the official add-on page of Classic Theme Restorer on Mozilla’s AMO site today, you will notice the following paragraph at the top:

This add-on will stop working when Firefox 57 arrives in November 2017 and Mozilla drops support for XUL / XPCOM / legacy add-ons. It should still work on Firefox 52 ESR until ESR moves to Firefox 59 ESR in 2018 (~Q2).

There is no “please port it” or “please add support for it” this time, because the entire add-on eco system changes and the technology behind this kind of add-on gets dropped without replacement.

Aris posted a request on Bugzilla to get Mozilla to introduce APIs that would allow him to port the add-on, but Mozilla marked the request as Wontfix. This means basically, that Mozilla won’t create the APIs required to port Classic Theme Restorer, and many of the other add-ons that require this kind of access.

While the new theme API may introduce some features, it is too limited to create a viable WebExtension version of Classic Theme Restorer.

413,000 users may not be much when compared to Firefox’s total population. Most of these users have — likely — used Firefox for years, even before the Australis days.

There is not much Firefox users can do about it if they rely on add-ons that cannot or won’t be ported to WebExtensions. Sticking with the last working build may work for a time, but it means that security issues will pile up, and that support for new web technologies won’t find its way into the browser either.

Switching to third-party ports may be an option, but it remains to be seen how many of those will survive the year 2017. The developer of Cyberfox stated recently for instance that the browser will reach end of life with the release of Firefox 52.x ESR.

Pale Moon will survive, but that is the only web browser based on Firefox that we know of that will do so.

Now You: If you are affected by the change, what’s your plan moving forward?

The post The death of Classic Theme Restorer for Firefox appeared first on gHacks Technology News.