The next major version of the open source cross-platform email client Thunderbird will support the OpenPGP encryption standard natively.

Thunderbird users may use the extension Enigmail currently to use OpenPGP functionality in the email client; this adds encryption and digital signature support to the email client to protect emails from unauthorized access (emails are transferred in plain text by default). Jack Wallen reviewed Enigmail back in 2009 and I published an updated guide in September 2017 detailing how to encrypt emails in Thunderbird using Enigmail.

The development team released Thunderbird 68 in August. Thunderbird shares code with the Firefox web browser and a consequence of that was that the team had to make changes to the extensions system just like Mozilla did when it released Firefox 57.  Thunderbird 68.0 does not support certain types of classic extensions and the next major version of Thunderbird, version 78, finalizes the migration. 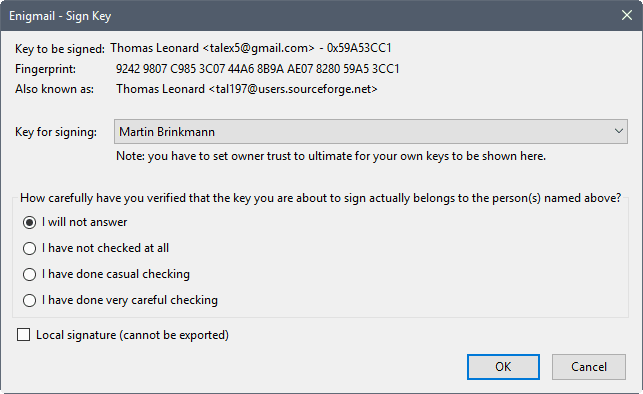 One consequence of the move is that classic add-ons, Enigmail being one of them, won’t be supported anymore in the new version of the email client. Some extensions may be ported while others may not as it depends on API support and a developer’s willingness to migrate the extension.

Enigmail is used by over 119,000 users currently and discontinuation of the extension would affect these users severely. The development team decided to explore options and one of them was to integrate the OpenPGP standard natively in the client; this would allow users of Enigmail to migrate to the built-in functionality and make encryption functionality available to all users of the email client.

Thunderbird 78, which will be released in Summer 2020, will support native encryption. Enigmail won’t be compatible with Thunderbird 78 anymore. The developer of the Enigmail extension agreed to work with the Thunderbird team to implement OpenPGP functionality in the email client.

Enigmail users will get options to migrate existing keys and settings, and most things should work just like before. Whether indirect key ownership confirmations will be supported has not been decided yet.

Thunderbird 78 “will encourage” users of Enigmail to perform ownership confirmations of keys and notify the user if the key of the correspondent changed.

Encryption won’t be enabled automatically for users who have not used Enigmail in the past but the team plans to integrate discovery options in the client.

A wiki page highlights the plans in detail.

Thunderbird 78 will support native OpenPGP standard support; that is a good thing as it unlocks encryption options to every user of the client. The original developer will work on the integration and existing users may migrate to the native solution once it lands in Thunderbird. A few uncertainties remain as the development plan has not been finalized yet.

Thank you for being a Ghacks reader. The post Thunderbird to support OpenPGP encryption standard in 2020 appeared first on gHacks Technology News.