Microsoft modified the built-in Task Manager of the Windows operating system significantly when it released Windows 10 in 2015. Some of the changes did not add value to the administrative tool; a prime example is the new default view mode of the Task Manager.

The basic view mode lists open programs but no other information and most system administrators and advanced users consider it completely useless. Good news is that Windows remembers when you switch to the full view mode and that you may set a default tab in the Task Manager in Windows 10 1903.

The Task Manager functions as a basic autostart manager in Windows 10, displays performance information, and will display the GPU temperature in Windows 10 20H1.

One issue that you may have with these listings is that they tend to update fairly quickly. The order of process groups and processes may change when the listing updates and that may make it more difficult to focus on individual processes.

The Windows Task Manager supports an option to change the update speed of the listings. Microsoft implemented the functionality in earlier versions of Windows and it is part of the Windows 10 Task Manager as well.

All you have to do is select View > Update speed to switch to a new update interval. 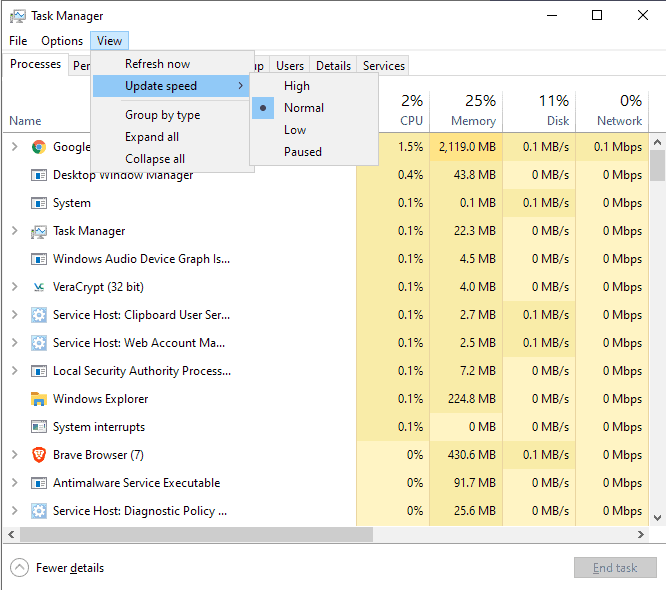 Normal is the default interval; high speeds up the updating, low slows it down. Admins who want to freeze the process listing may selected paused to do so. Windows won’t update the listing when paused is selected. Low seems to slow down the update interval to about 5 seconds.

The update speed affects all displays (tabs) of the Task Manager and not only the process listings.  The task manager remembers the selected update speed. If you have selected paused, it will launch with that update interval the next time you fire it up.

The ability to pause the listing or to slow it down will certainly be appreciate by Windows administrators who use the built-in Task Manager for certain tasks. The saving of the update speed state is useful as well for some users, others need to remember to change the value back before they close the application.

Now You: do you use the Windows Task Manager?

Ghacks needs you. You can find out how to support us here (https://www.ghacks.net/support/) or support the site directly by becoming a Patreon (https://www.patreon.com/ghacks/). Thank you for being a Ghacks reader. The post Tip: how to change the Windows Task Manager update speed appeared first on gHacks Technology News.