Do you record audio and use it as a source for taking notes, e.g. for work or studying? Listen N Write is a freeware tool that may help you with that if you do.

It lets you listen to audio recordings to transcribe them without having to switch between two different programs for the same purpose. 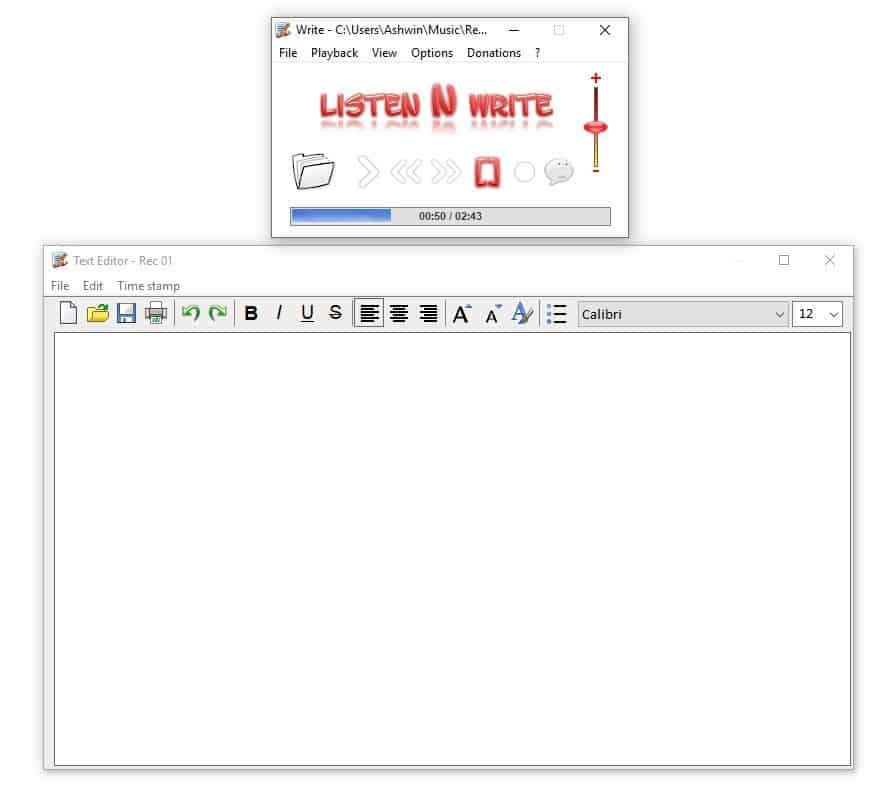 Note: This is not a transcription software that converts audio to text. Melanie reviewed the program back in 2011; time to take another look and see how it has changed.

Listen N Write has two windows: one controls the audio player, the other the text editor.

The menu bar has four menus that list various important options. The File menu can be used to open an existing multimedia file; officially, the program only supports WAV and MP3, but I was able to play the audio from video files (AVI, MKV, MOV) as well.

You can optionally use the built-in Sound Recorder in Listen N Write to record audio. It works with internal microphones on laptops and the sound card (speakers). Audio recordings made with the program can only be saved in WAV format.

The Playback menu lets you play, pause, stop, jump back or forward or reduce/increase the playback speed. There is an option to navigate to a specific time stamp of the audio too. The one which I found most useful here was the bookmark option which lets you mark time points throughout the audio that can be used for quick reference. The View menu lets you disable the text editor (if you want to use it just for playing or recording audio). You can control the playback with the function keys (F3 to F7).

The playback bar has 7 buttons for opening files, pausing, go back, go forward, stop, recording the audio. The dictation key (F12) also called the Smart pause and play is useful when you want to pause the playback and type in the text editor. 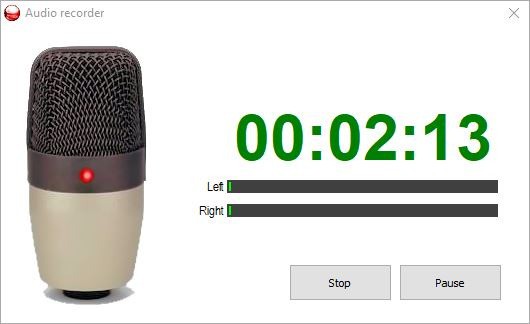 Tip: Not a fan of keyboard shortcuts? Since both the audio player and text editor are floating panes, you can place the player above the text editor and control it with the mouse.

The menu bar has the File and Edit menus for your basic operations. The third option, time stamp, is unique. Clicking on it adds the exact time position of the audio to the text editor. Say for example, you’re listening to an audio which is at 0:51, and you click “Time Stamp”, it will add [00:00:51] to the text editor and you can add the text from the audio for reference.

Listen N Write can save text documents in TXT and RTF formats and features basic formatting tools that a word processor would have. 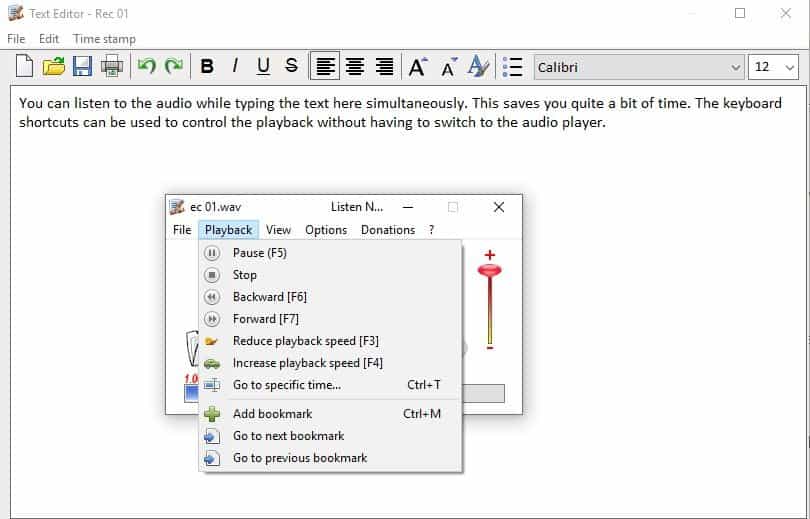 The regular installer and the portable version are available as separative archives which contain a single EXE. It is a self-extracting archive that has all the files which are required for the program to function.

Note: I had an issue with the portable version not displaying the text editor, and had to use the installer version.

Though Listen N Write can largely be useful for students who want to record lectures, office workers who wish to go over the content from meetings, writers, or journalists. I think it may also be a handy tool for people who are learning a new language.

Thank you for being a Ghacks reader. The post Transcribe text from audio recordings with Listen N Write appeared first on gHacks Technology News.