Alex Kontos, the developer of the Waterfox web browser, released the first alpha version of the upcoming Waterfox 68 release on May 8, 2019.

Waterfox 68 is the next major release of the web browser as it movies the web browser to a newer Firefox core. The current version of Waterfox is based on Firefox 56 code.

If you compare Firefox 56 to 68, you will notice huge changes in regards to support for web technologies, APIs, extensions, and other areas. Mozilla dropped the classic add-ons system of Firefox in version 57.

Waterfox 68, on the other hand, will still support classic browser extensions to a degree. We talked about the compromise made in that version some days ago. Waterfox 68 uses code developed by the team that develops the Thunderbird email client. The Thunderbird team faced the same difficult situation: it had to update the email client to a newer core but did not want to drop support for classic extensions for Thunderbird just yet. 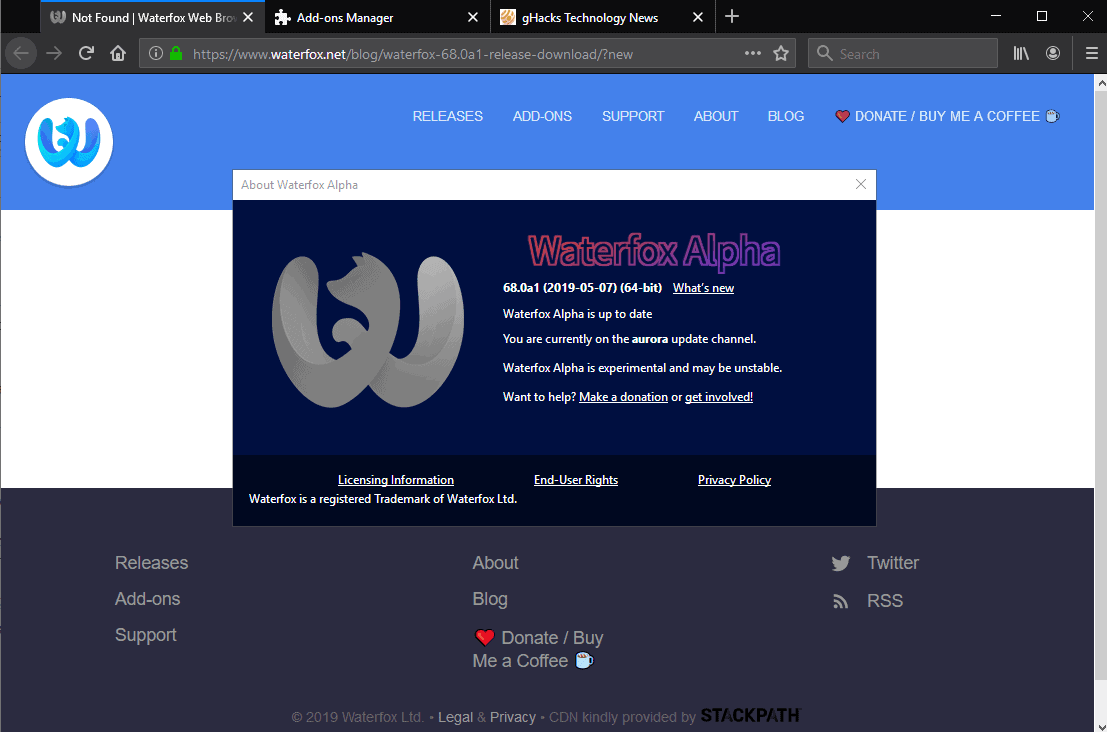 The Waterfox 68 Alpha release, available on GitHub, can be downloaded for all supported operating systems. Several popular classic extensions, DownThemAll, SaveFileTo, PrivateTab or KeyConfig, are available already as well for download.

The alpha installer creates a new profile for that version; existing stable profiles should not be touched because of that. I still suggest that you back up existing Waterfox profiles to avoid any issues when testing the alpha build.

A new profile means that the installation won’t pick up any of the installed extensions either. The extensions that are distributed with the release work fine in Waterfox 68. You will notice, however, that you cannot install (some) classic extensions at the time as these require compatibility changes.

Existing Waterfox users may want to test all of their extensions in the new Waterfox 68 Alpha to find out how many of them are compatible with the new build.

Benchmark scores have improved significantly when compared to the current version of Waterfox. You should expect scores similar to current versions of the Firefox web browser when it reaches version 68.

Waterfox 68 is a development release that is used for testing primarily. Existing Waterfox users may use it to test their extensions against the new version to find out if they can still be used without modification in the new version.

The new version of Waterfox will come out shortly after Mozilla releases Firefox 68 in July 2019.

Now You: Are you a Waterfox user? How many of your add-ons are compatible?

Ghacks needs you. You can find out how to support us here (https://www.ghacks.net/support/) or support the site directly by becoming a Patreon (https://www.patreon.com/ghacks)). Thank you for being a Ghacks reader. The post Waterfox 68 Alpha is out appeared first on gHacks Technology News.