As a user of the web browser Firefox or someone who is interested in trying it out, you probably would like to know more about what Mozilla has planned for Firefox in 2018 (and beyond).

With Google integrating limited advertisement blocking into the Chrome browser and other nice to have features into the web browser, it is only natural to wonder what Mozilla has planned in this regard.

Good news for users interested in Firefox is that Mozilla has big plans for Firefox in 2018; the following paragraphs reveals new features that Firefox users will have at their disposal this year (if the schedule holds). 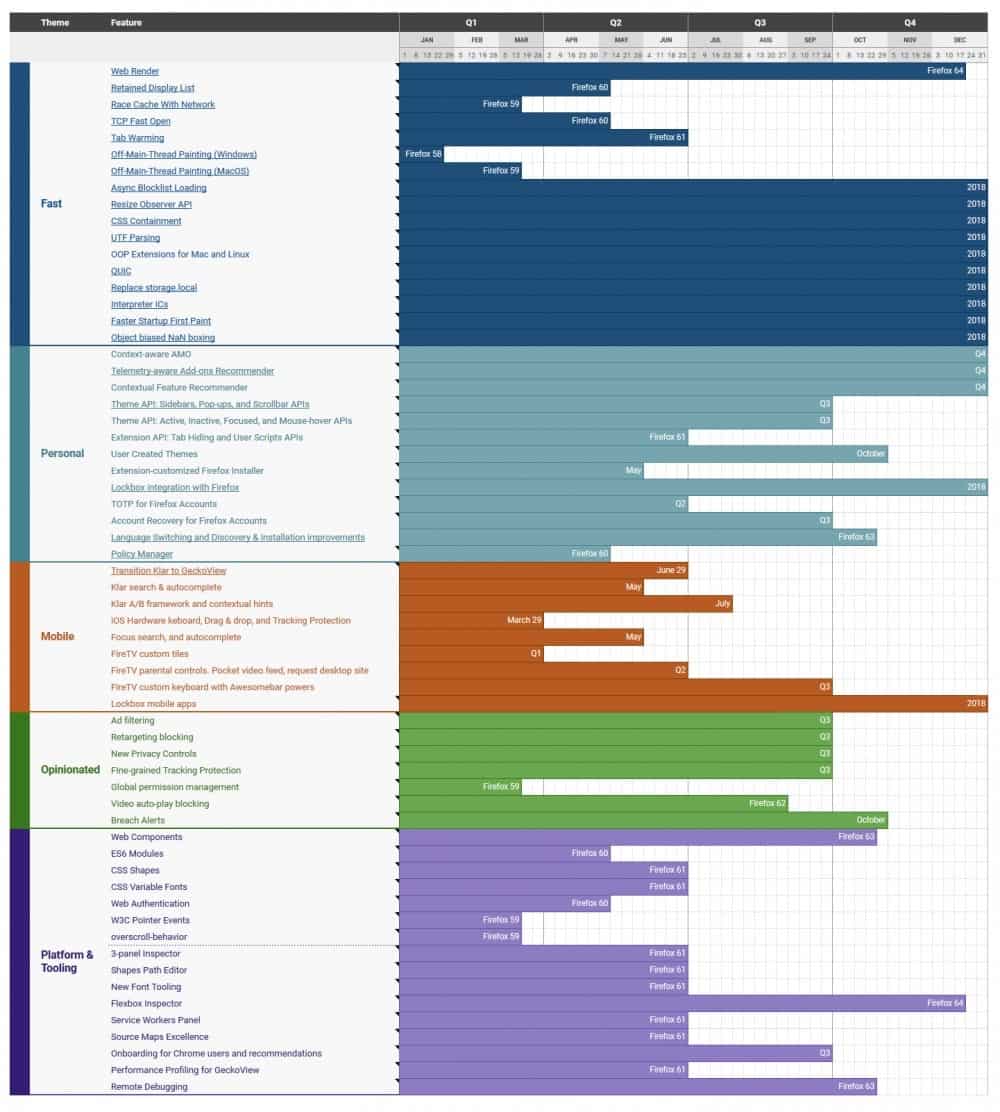 The user experience is one of the key areas that Mozilla targets for improvements.

The organization plans to integrate ad-filtering, ad re-targeting protection and other features into the browser that improve the user experience:

Mozilla engineers plan to improve Firefox’s performance, speed and even the user’s perception of speed further in 2018.

Personalization and customization improvements that Mozilla plans to land in Firefox in 2018 are listed below:

My take on the roadmap

Mozilla has big plans for Firefox in 2018 and that is exactly what the browser needs. Firefox is in a situation currently that makes it seem as if it is one-step behind Chrome in many areas; Google, the largest advertisement company on the planet introduced ad-blocking already in 2018 but Firefox has not.

Tracking Protection was a good start but the feature got no love at all since its introduction in 2014. Mozilla found out in 2015 that Tracking Protection reduced page load time by 44% on average, but has not acted upon that at all. I think that the organization missed a big opportunity back then to take the lead and attract users.

I’m looking forward to many of the features that Mozilla plans to integrate in Firefox in 2018. Ad-filtering, the blocking of re-targeting ads, improved tracking protection functionality and an easy option to block autoplaying video content on the Web are all welcome additions.

Mozilla could use different criteria than Google to determine acceptable and unacceptable ads. One example: Chrome won’t block autoplaying videos without sound but Mozilla could add the format to Firefox to block it.

While some of those are already available through extensions, native integration in Firefox benefits all users of the browser, even the more than 40% that don’t run any extensions.

Support for additional APIs and other usability improvements as well as speed and performance improvements are welcome additions and changes all in all.

I’m a bit worried about some of the personalization features, especially the Contextual Feature Recommender which “proactively delivers personalized Firefox feature and extension recommendations to users based on their behavior” but I don’t know enough about the feature or its implementation to make a final call at this point.

Now You: What’s your take on the Firefox roadmap for 2018?

Ghacks needs you. You can find out how to support us here or support the site directly by becoming a Patreon. Thank you for being a Ghacks reader. The post What Mozilla has planned for Firefox in 2018 (ad-filtering and more) appeared first on gHacks Technology News.