Microsoft started the rollout of the May 2019 Update for Windows 10 yesterday. The company announced earlier this year that it would improve the upgrade functionality to give administrators more control over the installation of new feature updates for the operating system.

The two preview updates for Windows 10, the official release will be on the June 2019 Patch Tuesday, June 11, 2019, introduce new features and fix certain issues. 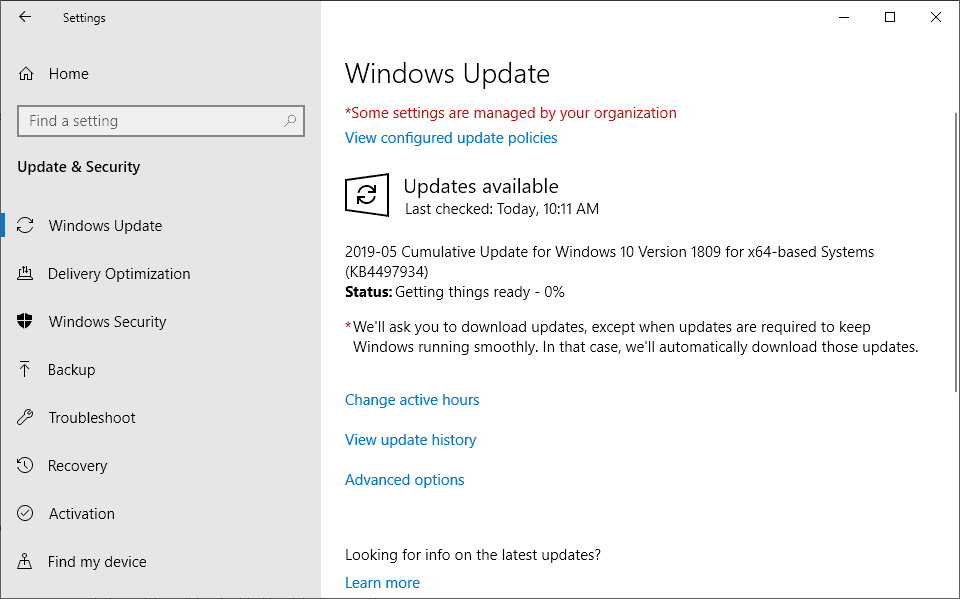 Among the new features is support for the new upgrading behavior. Microsoft notes:

[..] we are introducing functionality that allows you to decide when to install a feature update. You control when you get a feature update while simultaneously keeping your devices up to date. Feature updates that are available for eligible devices will appear in a separate module on the Windows Update page (Settings > Update & Security > Windows Update). If you would like to get an available update right away, select Download and install now.

The two updates are already available on Windows Update. Note that it is necessary to run a manual check for updates to install these on Windows 10 systems, and that they are previews.

In other words: these are beta releases and it is not recommended to install them on production machines.

Make sure you backup important files and the system before you start installing any updates that Microsoft throws your way.

Here are the other fixes and changes that these two updates make and introduce:

Here are the fixes and improvements:

Here are the fixes and improvements (shares most issues with KB4499183, only unique ones listed):

Ghacks needs you. You can find out how to support us here (https://www.ghacks.net/support/) or support the site directly by becoming a Patreon (https://www.patreon.com/ghacks)). Thank you for being a Ghacks reader. The post Windows 10 1803 1809 updates KB4499183 KB4497934 released appeared first on gHacks Technology News.