addons.mozilla.org (AMO) has been around for more than 12 years, making it one of the oldest websites at Mozilla. It celebrated its 10th anniversary a couple of years ago, as Wil blogged about.

AMO started as a PHP site that grew and grew as new pieces of functionality were bolted on. In October 2009 the rewrite from PHP to Python began. New features were added, the site grew ever larger, and now a few cracks are starting to appear. These are merely the result of a site that has lots of features and functionality and has been around for a long time.

The site architecture is currently something like below, but please note this simplifies the site and ignores the complexities of AWS, the CDN and other parts of the site. 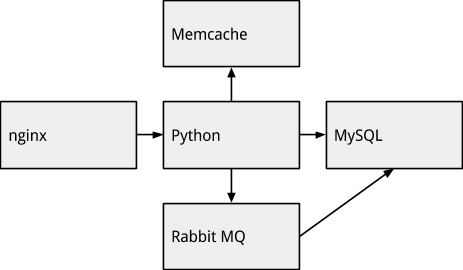 Basically, all the code is one repository and the main application (a Django app) is responsible for generating everything—from HTML, to emails, to APIs, and it all gets deployed at the same time. There’s a few problems with this:

We are moving towards a new model similar to the one used for Firefox Marketplace. Whereas Marketplace built its own front-end framework, we are going to be using React on the front end.

The end result will start look something like this:

A separate version of the site is rendered for the different use cases, for example developers or users. In this case a request comes in hits one of the appropriate front-end stacks. That will render the site using React universal in node.js on the server. It will access the data store by calling the appropriate Python REST APIs.

In this scenario, the legacy Python code will migrate to being a REST API that manages storage, transactions, workflow, permissions and the like. All the front-facing user interface work will be done in React and be independent from each other as much as possible.

It’s not quite micro services, but the breaking of a larger site into smaller independent pieces. The first part of this is happening with the “discovery pane” (accessible at about:addons). This is our first project using this infrastructure, which features a new streamlined way to install add-ons with a new technical architecture to serve it to users.

As we roll out this new architecture we’ll be doing more blog posts, so if you’d like to get involved then join our mailing list or check out our repositories on Github.