The application is a fork of APKUpdater which we reviewed in 2017, twice. APKUpdater development stopped in 2017 and the new app takes over making sure that it is fully compatible with new Android devices and operating system versions.

There are two core reasons why someone would want to use an application like APKGrabber, and both have to do with Google Play.

Tip: Find out how to save installed Android apps to your device. 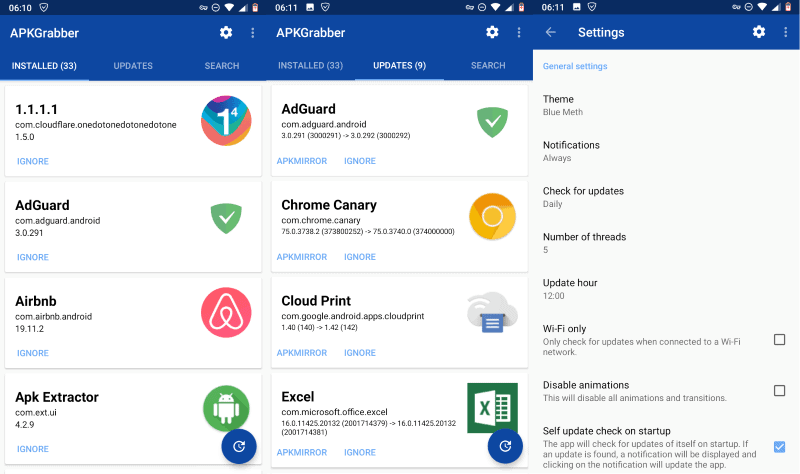 APKGrabber looks and functions pretty much like APKUpdater. The application displays the list of installed apps on start, each with its name and version.

A tap on the scan button runs a scan for updates. The application scans third-party hosts like APK Mirror for updates and displays all updates that it finds in the updates tab in the interface. APK Mirror is the default source but you may add Google Play, APK Pure, or Uptodown to the list of sources in the application settings.

The current and new versions are displayed for each app, and you may either ignore an update or hit the source button to open it in a browser to download the updated APK file to your device to install it.

The app does not update applications that you select automatically. While that is less comfortable, it does give you more control over the updating process.

New users may want to go through the options on first start; you may change update scan parameters, disable self-update checks, or enable Wi-Fi only checking there.

APKGrabber is a useful application for Android users who don’t want to use Google Play, cannot use it, or want application updates to reach their devices faster or at all. There is a risk in downloading apps from third-party sources, but the same is true for apps that are distributed through Google Play as the past has shown.

Now You: How do you update your apps?

Ghacks needs you. You can find out how to support us here or support the site directly by becoming a Patreon. Thank you for being a Ghacks reader. The post APKGrabber: update Android apps without Google Play appeared first on gHacks Technology News.