In March, we released a survey asking add-on developers which APIs they need to transition successfully to WebExtensions. So far, 235 people have responded, and we’ve summarized some of the findings in these slides.

Developers with the most add-ons responded at a disproportionate rate. Those with 7 or more add-ons represent 2% of the add-on developer community, and those with 4-6 add-ons represent 3%, but they comprised 36.2% of survey respondents. This didn’t come as a surprise, since the most active developers are also the most engaged and have the most to gain by migrating to WebExtensions.

Nearly half of respondents have tried implementing their add-ons in Chrome, and the most cited limitation is that it’s restrictive. Developers could not do much with the UI other than add buttons or content tabs. We intend to offer APIs that give developers more freedom to customize their add-ons, and these results tell us we’re on the right track.

In the coming months, we’ll draw on these results to inform our decisions and priorities, to ensure WebExtensions lives up to it promise…and goes beyond. 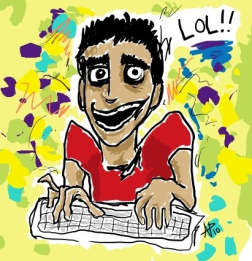 A few months ago Noit Saab’s boss at a nanotech firm came to him with a desperate situation. They had just discovered nearly 900 industrial containers held corrupted semiconductor wafers.

This was problematic for a number of reasons. These containers were scattered across various stages of production, and Noit had to figure out precisely where each container was at in the process. If not, certain departments would be wrongly penalized for this very expensive mishap.

It was as much an accounting mess as it was a product catastrophe. To top it off, Noit had three days to sort it all out. In 72 hours the fiscal quarter would end, and well, you know how finance departments and quarterly books go.

Fortunately for Noit—and probably a lot of very nervous production managers—he used a nifty little add-on called iMacros to help with all his web-based automation and sorting tasks. “Without iMacros this would have been impossible,” says Noit. “With the automation, I ran it overnight and the next morning it was all done.”

“I use add-ons daily for everything I do,” says Noit. “I couldn’t live without them.” In addition to authoring a few add-ons himself, like NativeShot (screenshot add-on with an intriguing UI twist), MouseControl (really nice suite of mouse gestures), MailtoWebmails (tool for customizing the default actions of a “mailto:” link), and Profilist (a way to manage multiple profiles that use the same computer, though still in beta), here are some of his favorites…

“I use Telegram for all my chatting,” says Noit. “I’m not a big mobile fan so it’s great to see a desktop service for this.”

Media Keys, because “I always have music playing from a YouTube list, and sometimes I need to pause it, so rather than searching for the right tab, I use a global hotkey.”

“And of course, AdBlock Plus,” concludes Noit.

If you, dear friends, use add-ons in interesting ways and want to share your experience, please email us at editor@mozilla.com with “my story” in the subject line.

Today’s post comes from Piro, the developer of Popup ALT Attribute, in addition to 40 other add-ons. He shares his thoughts about migrating XUL/XPCOM add-ons to WebExtensions, and shows us how he did it with Popup ALT Attribute. You can see the full text of this post on his personal blog.

Hello, add-on developers. My name is YUKI Hiroshi aka Piro, a developer of Firefox add-ons. For many years I developed Firefox and Thunderbird add-ons personally and for business, based on XUL and XPCOM.

I recently started to research the APIs are required to migrate my add-ons to WebExtensions, because Mozilla announced that XUL/XPCOM add-ons will be deprecated at the end of 2017. I realized that only some add-ons can be migrated with currently available APIs, and
Popup ALT Attribute is one such add-on.

Here is the story of how I migrated it.

Popup ALT Attribute is an ancient add-on started in 2002, to show what is written in the alt attribute of img HTML elements on web pages. By default, Firefox shows only the title attribute as a tooltip.

Initially, the add-on was implemented to replace an internal function FillInHTMLTooltip() of Firefox itself.

Re-formatting in the WebExtensions style

I read the tutorial on how to build a new simple WebExtensions-based add-on from scratch before migration, and I realized that bootstrapped extensions are similar to WebExtensions add-ons:

My add-on was easily re-formatted as a WebExtensions add-on, because I already migrated it to bootstrapped.

This is the initial version of the manifest.json I wrote. There were no localization and options UI:

I had already separated the main script to a frame script and a loader for it. On the other hand, manifest.json can have some manifest keys to describe how scripts are loaded. It means that I don’t need to put my custom loaders in the package anymore. Actually, a script for any web page can be loaded with the content_scripts rule in the above sample. See the documentation for content_scripts for more details.

So finally only 3 files were left.

And I still had to isolate my frame script from XPCOM.

For the old install.rdf I had a localized description. In WebExtensions add-ons I had to do it in different way. See how to localize messages for details. In short I did the following:

Note, en_US is different from en-US in install.rdf.

Japanese locale, _locales/ja/messages.json was also included. And, I had to update my manifest.json to embed localized messages:

__MSG_****__ in string values are automatically replaced to localized messages. You need to specify the default locale manually via the default_locale key.

Sadly, Firefox 45 does not support the localization feature, so you need to use Nightly 48.0a1 or newer to try localization.

Currently, WebExtensions does not provide any feature completely compatible to nsIPrefBranch. Instead, there are simple storage APIs. It can be used like an alternative of nsIPrefBranch to set/get user preferences. This add-on had no configuration UI but had some secret preferences to control its advanced features, so I did it for future migrations of my other add-ons, as a trial.

Then I encountered a large limitation: the storage API is not available in content scripts. I had to create a background script just to access the storage, and communicate with it via the inter-sandboxes messaging system. [Updated 4/27/16: bug 1197346 has been fixed on Nightly 49.0a1, so now you don’t need any hack to access the storage system from content scripts anymore. Now, my library (Configs.js) just provides easy access for configuration values instead of the native storage API.]

Finally, I created a tiny library to do that. I don’t describe how I did it here, but if you hope to know details, please see the source. There are just 177 lines.

I had to update my manifest.json to use the library from both the background page and the content script, like:

Scripts listed in the same section share a namespace for the section. I didn’t have to write any code like require() to load a script from others. Instead, I had to be careful about the listing order of scripts, and wrote a script requiring a library after the library itself, in each list.

One last problem was: how to do something like the about:config or the MCD — general methods to control secret preferences across add-ons.

For my business clients, I usually provide add-ons and use MCD to lock their configurations. (There are some common requirements for business use of Firefox, so combinations of add-ons and MCD are more reasonable than creating private builds of Firefox with different configurations for each client.)

I think I still have to research around this point.

WebExtensions provides a feature to create options pages for add-ons. It is also not supported on Firefox 45, so you need to use Nightly 48.0a1 for now. As I previously said, this add-on didn’t have its configuration UI, but I implemented it as a trial.

In XUL/XPCOM add-ons, rich UI elements like , , , and more are available, but these are going away at the end of next year. So I had to implement a custom configuration UI based on pure HTML and JavaScript. (If you need more rich UI elements, some known libraries for web applications will help you.)

On this step I created two libraries:

I’ve successfully migrated my Popup ALT Attribute add-on from XUL/XPCOM to WebExtensions. Now it is just a branch but I’ll release it after Firefox 48 is available.

Here are reasons why I could do it:

However, it is a rare case for me. My other 40+ add-ons require some privilege, and/or they work outside the content area. Most of my cases are such non-typical add-ons.

I have to do triage, plan, and request new APIs not only for me but for other XUL/XPCOM add-on developers also.

Thank you for reading.

I post these updates every 3 weeks to inform add-on developers about the status of the review queues, add-on compatibility, and other happenings in the add-ons world.

There are 73 listed add-ons awaiting review.

You can read about the recent improvements in the review queues here.

If you’re an add-on developer and are looking for contribution opportunities, please consider joining us. Add-on reviewers get invited to Mozilla events and earn cool gear with their work. Visit our wiki page for more information.

To ensure long-term compatibility, we suggest you start looking into WebExtensions, or use the Add-ons SDK and try to stick to the high-level APIs. There are many XUL add-ons that require APIs that aren’t available in either of these options, which is why we’re also asking you to fill out this survey, so we know which APIs we should look into adding to WebExtensions.

We’re holding regular office hours for Multiprocess Firefox compatibility, to help you work on your add-ons, so please drop in on Tuesdays and chat with us!

The compatibility blog post for 47 is up. The bulk validation will be run soon. Make sure that the compatibility metadata for your add-on is up to date, so you don’t miss these checks.

As always, we recommend that you test your add-ons on Beta and Firefox Developer Edition to make sure that they continue to work correctly. End users can install the Add-on Compatibility Reporter to identify and report any add-ons that aren’t working anymore.

The wiki page on Extension Signing has information about the timeline, as well as responses to some frequently asked questions. The current plan is to remove the signing override preference in Firefox 47 (updated from 46).

As the transition to WebExtensions continues, we are also building tools to make developing them faster and easier than ever. Our latest is a command line tool called web-ext, which we released recently as an initial working version with some basic features.

We built it because we want developing extensions to be fast and easy. Just as Firefox’s WebExtensions API is designed for cross-browser compatibility, we want web-ext to eventually support platforms such as Chrome or Opera. We will continue developing jpm in parallel, as needed.

To give it a try, you can install it from npm:

When developing an extension, here’s how you can run it in Firefox to test it out:

This is similar to how you can load your source directly on the about:debugging page.

When you’ve got your extension working, here’s how to build an XPI file that can be submitted to addons.mozilla.org:

You can also self-host your XPI file for distribution but it needs to be signed by Mozilla first. Here’s how to build and sign an XPI file:

The end user documentation is a work in progress but you can reference all commands and options by typing:

As you can see, this is a very early release just to get you started while we continue adding features. If you’d like to help out on the development of web-ext, check out the contributor guide and take a look at some good first bugs.