Vivaldi continues its work of integrating protective features into the company’s web browser. The company launched tracking protection in a recent snapshot to block known trackers automatically when the feature is enabled.

The latest snapshot goes a step further by introducing a full-blown ad-blocker in the web browser.

In an earlier snapshot, we introduced a tracking blocker. Today we take this a step further and offer a more complete, built-in ad blocker for those who want it. We are adding this because many of you are already using ad blockers, in the form of extensions, but would prefer something maintained by us.

Vivaldi notes that the ad-blocker complements the tracking blocking functionality but does not supersede it. Users of the browser who want both protections need to enable the full blocking level in the browser’s settings.

Vivaldi does not reveal information about the ad-blocking functionality that it integrated into the browser. It appears to be list-based but it is unclear which blocking list or lists it uses.

A quick test showed that it blocked advertisement on the majority of sites visited while the feature was enabled in the browser.

Vivaldi users need to enable ad-blocking in the settings as it is disabled by default. Here is how that is done:

The changes take effect immediately, a restart is not required. Management of the feature is limited at the time of writing.

The only option that is provided is to create exceptions for sites. If you want to exclude Ghacks from the blocking, you’d need to click on the Shield icon while on the site and switch the blocking level to no blocking or tracker blocking.

All exceptions are listed on the Settings page underneath the Blocking Level preference. There it is possible to remove sites from the exceptions list.

Note that you can also add sites to the block list this way if the blocking level is not set to block tracking and/or advertisement.

The native ad-blocking worked well during tests and it may persuade some users to switch from using an extension for that to using the built-in functionality.

Some users may skip it for now as it offers less features than extension-based content blockers such as uBlock Origin; theser offer features such as custom filters, blocking list managements, additional protections, or options to block certain elements on sites which Vivaldi does not support at the time of writing.

Now You: What is your take on Vivaldi’s integration of ad-blocking and tracking-blocking in the browser?

Thank you for being a Ghacks reader. The post Vivaldi introduces ad-blocker in latest browser snapshot appeared first on gHacks Technology News.

The latest snapshot of the Vivaldi web browser displays a clock in the status bar of the browser that supports alarm and timer functionality.

Vivaldi has a status bar and it displays lots of options to the user, e.g. changing zoom, disabling images, capturing the page, and more.

The clock is another optional feature. While it is displayed by default, it can easily be hidden from the status bar if it is not required.

We’ve added a built in clock to the status bar. This also gives you the ability to quickly set alarms, either in the form of a count down or to a specific time in the future.

Vivaldi’s team added timer and countdown functionality to the clock that you may activate when you left or right-click on the time.

A left-click displays the countdown and alarm options. Both options are self-explanatory: use countdown to have the clock count down the specified hours/minutes, and alarm to set an alarm for a specific time of the day, e.g. for meetings, lunch, or breaks.

You may assign presets to both options to re-use these with the click of the button instead of having to configure them each time you plan on using them.

A right-click displays options to set countdown or alarm presets right away, to change the display of the clock in the status bar including its style and label, and to hide the clock on the status bar.

A clock in the status bar may not be a revolutionary feature but it may be useful to some users of the browser. Those who have no use for the feature can hide it easily using the right-click context menu.

Now You: Do you find the new clock functionality useful?

Thank you for being a Ghacks reader. The post Vivaldi adds a clock with alarm and timer to browser appeared first on gHacks Technology News.

Vivaldi Technologies released a new snapshot of the next version of the web browser to the public today. Builds or snapshots are created regularly by the company to test new features and provide interested users with options to test these before they make their way into the stable version of the browser.

Most snapshots are unspectacular when it comes to new functionality but the latest release is an exception to that. Vivaldi introduced Tracking blocker functionality in the browser. Powered by a list maintained by search engine DuckDuckGo, the Vivaldi browser is capable of blocking trackers without installation of an extension that integrates the functionality.

The list that Vivaldi uses is the same that DuckDuckGo uses in its Privacy Essentials browser extensions. It blocks “most of the known trackers out there and should not break websites” according to Vivaldi.

The initial version is disabled by default. Vivaldi takes the cautious approach and wants to test the functionality before enabling functionality that could impact functionality on some sites. Interested users that use Vivaldi may enable full blocking however or block content on select sites.

The tracking blocker options are available in the Settings. Select Menu > Settings > Privacy and scroll down to the Content Blocker section to manage the blocking functionality. If you want Vivaldi to use the full DuckDuckGo blocking list, switch the Tracking Blocker setting from “Block Trackers on ‘Always Block’ List Only to “Block Trackers on All Sites”.

You may also add sites to the “never block” and “always block” listing right there.

Note that this means that you are exposed to the trackers loaded on the site as these will get loaded by default if you don’t configure Vivaldi to block all trackers on all sites.

The toggle works as a whitelist if you have configured Vivaldi to block all trackers.

Vivaldi Technologies uses the same method that Mozilla implemented in the organization’s Firefox browser some time ago. Instead of implementing native ad-blocking, like Opera does, blocking is limited to known trackers to limit tracking.

Now You: Do you think that tracker blocking is a viable option?

Thank you for being a Ghacks reader. The post Vivaldi introduces Tracking blocker functionality in latest build appeared first on gHacks Technology News.

Vivaldi Technologies has released Vivaldi 2.11 for the desktop a moment ago. The new stable version of the Vivaldi web browser is available as a direct download from the official company website and as an automatic update from within Vivaldi provided that automatic updating has not been turned off.

To run a check for update in the browser select Menu > Help > Check for Updates. The browser queries the Vivaldi server to find out if an update is available, and if it is, downloads and installs it.

Tip: find out how to speed up the Vivaldi web browser.

Vivaldi 2.11 introduces several usability changes including focus shifting when using the keyboard, support for dark and light settings of the operating system, and pop-out video improvements.

Vivaldi’s rather unique theme scheduling feature, introduced in Vivaldi 1.4, allows users to change themes automatically based on the time of day.

The company introduced a new option to the theme scheduling feature that honor the theme setting of the operating system. Just open the Settings of the web browser and check the “Use Operating System Theme” option under Scheduled Themes.

There you may select a light and dark theme that you want applied to the browser.

If you use keyboard shortcuts in Vivaldi, which is without doubt one of the strengths of the web browser, then you may like the new focus shifting feature when using the keyboard.

Vivaldi engineers mapped functions to the F6 key to cycle between major interface elements. Tap on F6 to cycle between different areas such as the webpage, bookmarks bar, tab bar, and address bar. From there, it is easy to use the keyboard to navigate to certain elements, e.g. by using the arrow keys.

F6, and Shift-F6 which reverses the direction of activation, are enabled by default in Vivaldi 2.11.

The pop-out video allows you to watch videos in a dedicated frame by moving the video content to its own video. Vivaldi has supported the feature for a long time but up until now, it was a bit cumbersome to activate it.

Vivaldi displays a pop-out icon in the video interface when you hover the mouse over it. A click plays the video in its own frame, another moves it back to its original location.

Now You: Have you tried Vivaldi recently? What is your take on the browser?

Thank you for being a Ghacks reader. The post Vivaldi 2.11 released with new keyboard tricks and pop-out video improvements appeared first on gHacks Technology News.

A new version of the Vivaldi web browser was released on December 19, 2019. Vivaldi 2.10 features compatibility improvements and usability enhancements.

Vivaldi 2.10 is already available as an in-browser update. Vivaldi users may select Menu > Help > Check for updates to run a manual update check or wait until the new version is pushed to the device automatically.

The new version of Vivaldi is also available on the official company website for all supported operating systems.

Tip: find out how to speed up the Vivaldi web browser. 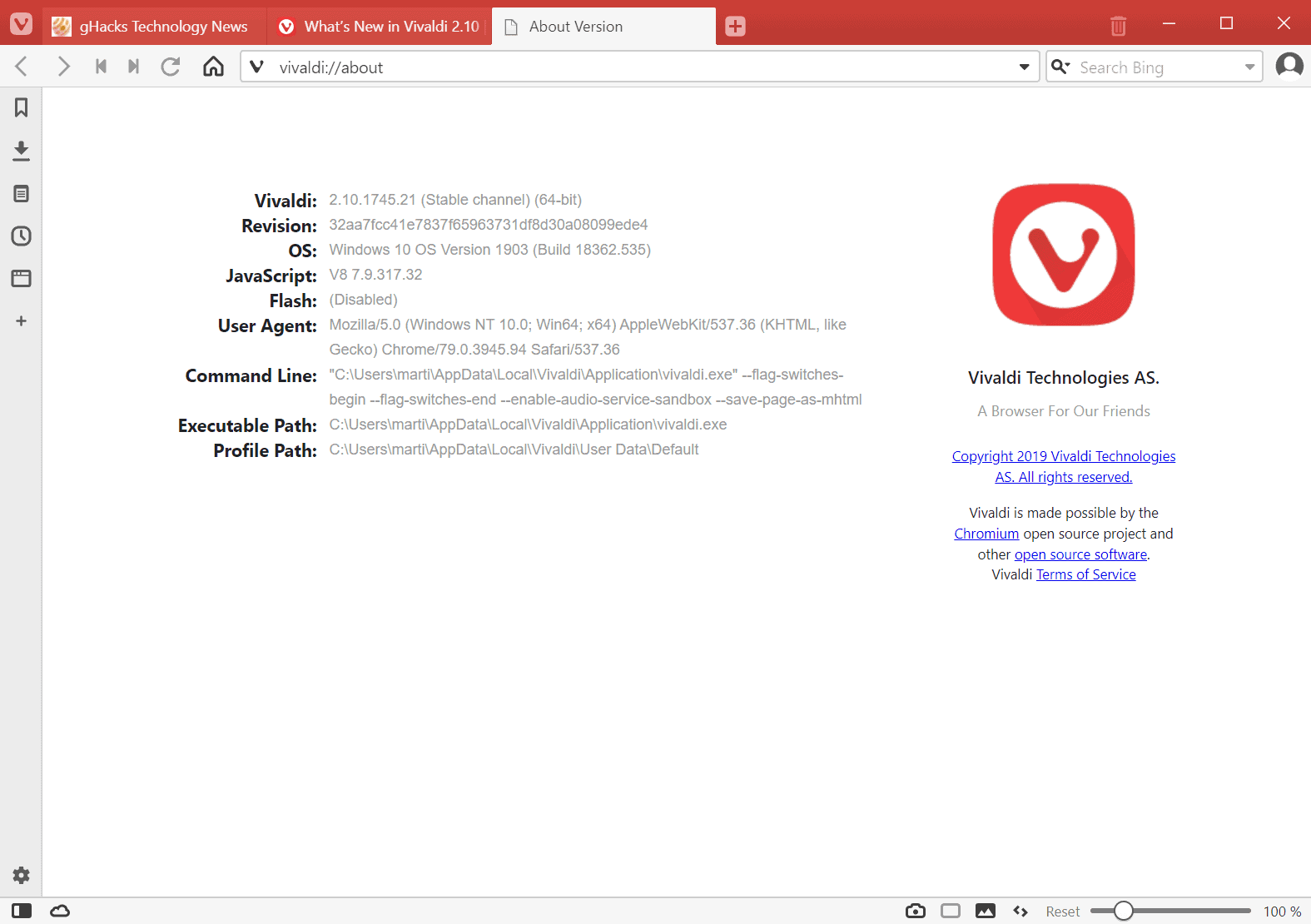 Vivaldi Technologies noticed that some sites on the Internet would block access to the Vivaldi browser outright or modify functionality instead; this is caused by sites using user-agent sniffing to determine the browser that is connecting to the site.

Vivaldi is based on Chromium and it should work on all sites that Chrome and other Chromium browsers work on. While that is the case, some sites did block Vivaldi in the past nevertheless.

To improve compatibility, Vivaldi engineers decided to drop the Vivaldi part of the user agent string to prevent sites from discriminating against the browser.

Vivaldi uses the classic user agent only on a certain number of sites including several search engines and the company’s own website.

The latest Windows version of Vivaldi returns the following user agent at the time of writing:

Vivaldi created a video that explains the concept further:

Another new feature in Vivaldi 2.10 introduces support for matching the browser user interface to the color scheme used by the operating system. The feature needs to be enabled under Settings > Themes > Scheduled Themes > Use Operating System Theme so that any pre-installed or custom theme may be used in light or dark mode.

The last stable Vivaldi release of 2019 features a number of additional improvements. The browser’s Quick Commands feature should perform better than before. Additionally, users may notice address bar and extensions improvements (toggle) in the new browser version.

As is the case with every Vivaldi release, the browser’s core has been updated to a new Chromium version.

User agent sniffing is abused in this day and age, sometimes by large Internet companies that operate browsers of their own. The change should improve compatibility significantly and reduce the likelihood of Vivaldi users running into sites that don’t load properly or block access outright.

Thank you for being a Ghacks reader. The post Vivaldi 2.10 is out with compatibility improvements appeared first on gHacks Technology News.