How are updates perceived by users of Windows 10 Home? A new study, “In Control with no Control: Perceptions and Reality of Windows 10 Home Edition Update Features” by a group of researchers from University College London suggests that updates are complex and that many users don’t know about certain features that could improve the updating behavior.

Updates are released on the second Tuesday of each month and sometimes out of schedule. Microsoft releases two feature updates for Windows 10 that upgrade the operating system to a new version.

Windows 10 Home users have less control over the updating than Pro, Enterprise, or Education users. Up until recently, it was not possible to pause updates or delay feature updates on Windows 10 Home devices officially; this meant that updates were installed as soon as they were picked up by Windows Update and that the devices had to be restarted to complete the updating process.

The only option that Home users have when it comes to controlling updates is to set Active Hours, a feature designed to prevent automatic restarts of the system during the period.

The researchers asked the participants of the study a number of questions. Among them whether the updating behavior of Windows 10 was easier and caused less interruptions than in previous versions of Windows.

About half of the study’s participants reported that they experienced unexpected restarts because of updates; 42% said that updates took longer than expected and 70% stated that they became more concerned the longer an update took to complete.

The researchers discovered that the Active Hours feature was set inappropriately for a large number of survey participants and that most users were unaware of the existence of the feature.

Only 28% of survey participants knew about feature and its default setting — 8AM to 5PM– was unsuitable for 97% of all users. The default Active Hours period is appropriate for businesses and may need to be adjusted even there.

Home users, on the other hand, at least those who participated in the study, used their computers on weekday evenings in the majority of cases; outside Active Hours.

Another key finding of the research is that many survey participants could not make distinctions between cumulative security updates and feature updates.

The researchers recommend to improve the Active Hours feature, either by providing users with direct information about it and its controls, or by using automation to pick appropriate Active Hours based on usage automatically.

A low number of participants, 97, participated in the study. It might be necessary to run a study with more users to verify the findings.

Now You: What is your take on Windows and updating? (via ZDNet)

Ghacks needs you. You can find out how to support us here or support the site directly by becoming a Patreon. Thank you for being a Ghacks reader. The post Windows 10 Update Study: too complex and not enough control appeared first on gHacks Technology News.

Remember the mysterious test that Microsoft wanted Windows 10 Insider Build testers to run recently without revealing anything about it?

Microsoft wanted users to report any issues found during the installation and launch of State of Decay, but did not reveal any information other than that.

Turns out that Microsoft could have had testers install the Xbox One version of State of Decay, or at least a large part of it, on the Windows 10 device.

Brad Sams over on Thurrot suggests that the State of Decay test was Microsoft’s first public test at making available an Xbox One game as the “primary installation for Windows”.

Microsoft did not confirm nor deny that; Sams discovered that the game installer downloaded the data from an Xbox Live domain and not from the usual server that Microsoft Store apps and games were offered from.

There is more evidence. It turns out that the downloaded files used the .xvc format. Microsoft created the format for the Xbox One but it seems the company added support for it to the upcoming version of Windows 10. 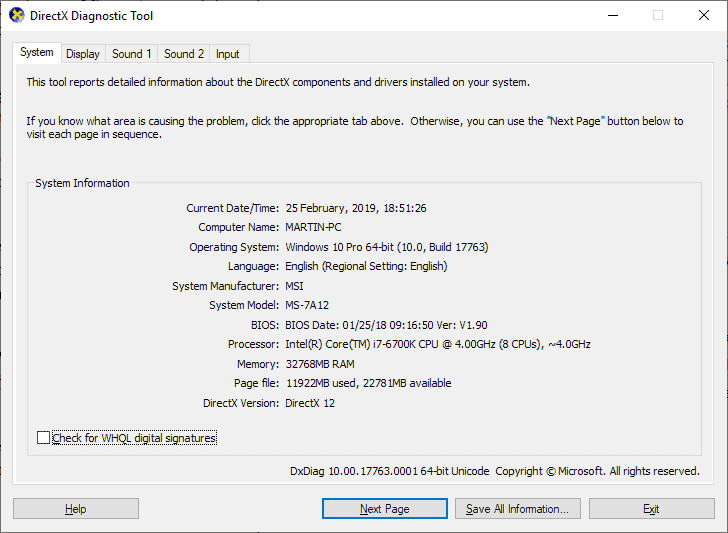 The State of Decay installer, which you can run from PowerShell as Sams notes, loads a legacy DirectX installation setup routine which installs the required DirectX components on the computer.

Microsoft has an interest in pushing the company’s Xbox One system and gaming on Windows 10. Making it easier for game companies to develop games that work on Xbox One and Windows 10 with little overhead will certainly help with that.

While it is certainly easier to develop games that run on PCs and consoles, thanks to consoles becoming more like PCs in many regards and improving development options, improving that process further could give Microsoft the boost it needs to compete with Sony and Nintendo in the console market, and increase Windows 10’s attractiveness as well.

It is unclear at this point whether the functionality will find its way into Windows 10 version 1903, the next feature upgrade version. It seems unlikely, considering that we are just 1-2 months away from the release of that version.

Microsoft could plan to have everything ready before the launch of its next console (Xbox Two, maybe). This would give it ample time, a year at least, to test and integrate the functionality in the operating system.

More Xbox games on PC is a good thing for PC gamers; most would probably prefer that Microsoft would not make the games Microsoft Store exclusive. Another concern that some gamers may have is that developers might use shortcuts by launching the Xbox One version in its unmodified or nearly unmodified state on PC; this could be problematic in regards to controls, graphics, and other functionality.

Now You: what is your take on this?

Ghacks needs you. You can find out how to support us here or support the site directly by becoming a Patreon. Thank you for being a Ghacks reader. The post Microsoft bringing PC and Xbox gaming closer together appeared first on gHacks Technology News.

The next feature update for Windows 10, Windows 10 version 1903, will support filenames and folders that begin with a dot character in Explorer.

The news may not be super exciting for users of Linux or other operating systems that supported filenames  or folders with dots in the beginning for decades, but for Windows, it is certainly a milestone.

The error “you must type a file name” is displayed (yes also for folders) and the only option the dialog provides is to select ok to restore the old filename or folder name (if you create a new file on Windows using Explorer, a file extension is added automatically).

Windows Explorer makes the creation of filenames without extension difficult. The file manager adds a file extension to new files that you create automatically. While you may remove the file extension to create a file without one, it is probably not something that most users of Windows do regularly.

Webmasters and developers might, especially if they work with web servers or Linux systems. It is not possible to create a .htaccess file from scratch using the Windows file manager, but you can copy a file like .htaccess to the Windows system and use it just like any other file that is on the system.

A double-click opens the file, and it saves just fine as well once you are done with the editing.

The same is true for names such as.gitignore or .nomedia which some users may make use of.

Windows 10 users who run Insider Builds can test the new functionality already; the change is live in the most recent Windows 10 version 1903 Insider Build and in the Skip Ahead build as well.

Now You: What is your take on the change? Did you run into file name or folder name creation issues in the past? (via Deskmodder)

Ghacks needs you. You can find out how to support us here or support the site directly by becoming a Patreon. Thank you for being a Ghacks reader. The post Windows 10 1903: support for filenames and folders with beginning dot character appeared first on gHacks Technology News.

Microsoft is working on Windows Sandbox, a sandboxed environment for the Windows operating system, currently.

The feature is being tested in Windows 10 Insider Builds currently and it is possible that Windows Sandbox will find its way into Windows 10 version 1903.

The initial version of Windows Sandbox was quite basic: users could launch it on Windows 10 devices and use it, but that was about the scope of it. 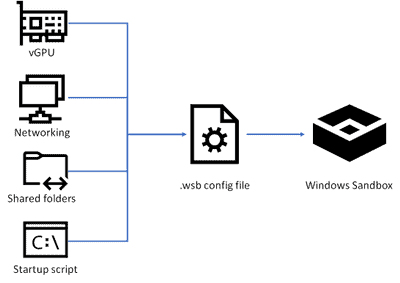 Starting with the latest builds, it is now possible to use config files to customize certain aspects. Config file support is basic at this point but it allows administrators and users to launch apps or scripts automatically in the sandbox. In other words: you may run something in the sandboxed environment automatically.

The config files use XML and have the extension .wsb. You may run any .wsb file with a double-click or by running it from the command line or by using scripts.

Most options are straightforward at this point in time.

path to the host folder
value

You need to specify a folder that you want to share with the host system, e.g. c:virtual, and whether you want it to be read-only or support write operations as well.

ReadOnly values are true (make it read-only) or false (read and write support).

Note that folders are always mapped under the path C:UsersWDAGUtilityAccountDesktop.

You may specify a file name and path or a script. The command explorer.exe would work, as would reference to a script, e.g. C:userswdagutilityaccountdesktopteststart.cmd.

Config file support extends Windows Sandbox functionality significantly as you may use these files to share folders with the sandbox and run scripts. You could use it to map a downloads folder and run downloaded files in the sandbox for that extra bit of security.

We will update the guide when new features are introduced.

Now You: What is your take on the Windows Sandbox so far? What would you like to see?

Ghacks needs you. You can find out how to support us here or support the site directly by becoming a Patreon. Thank you for being a Ghacks reader. The post How Windows Sandbox config files work appeared first on gHacks Technology News.

Note: These are not security updates; they fix stability and other issues only. It is recommended that you back up your system before you install the updates or wait if you are not affected by any of the listed issues.

And Windows 10 version 1809? Microsoft pushes cumulative updates for the current version of Windows 10 to the Release Preview ring first before release. It is likely that an update will be released in the coming days / week. 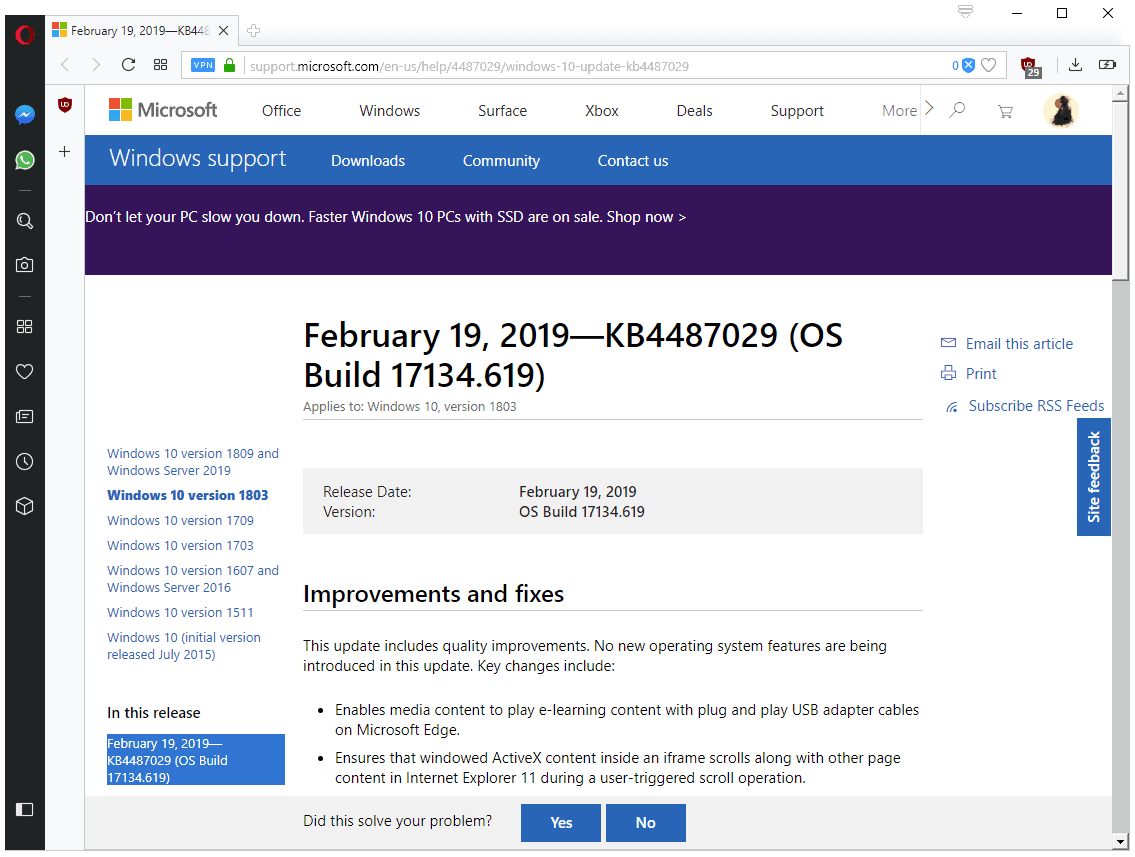 The update increases the build of the operating system to 17134.619. The following changes are listed in the changelog: 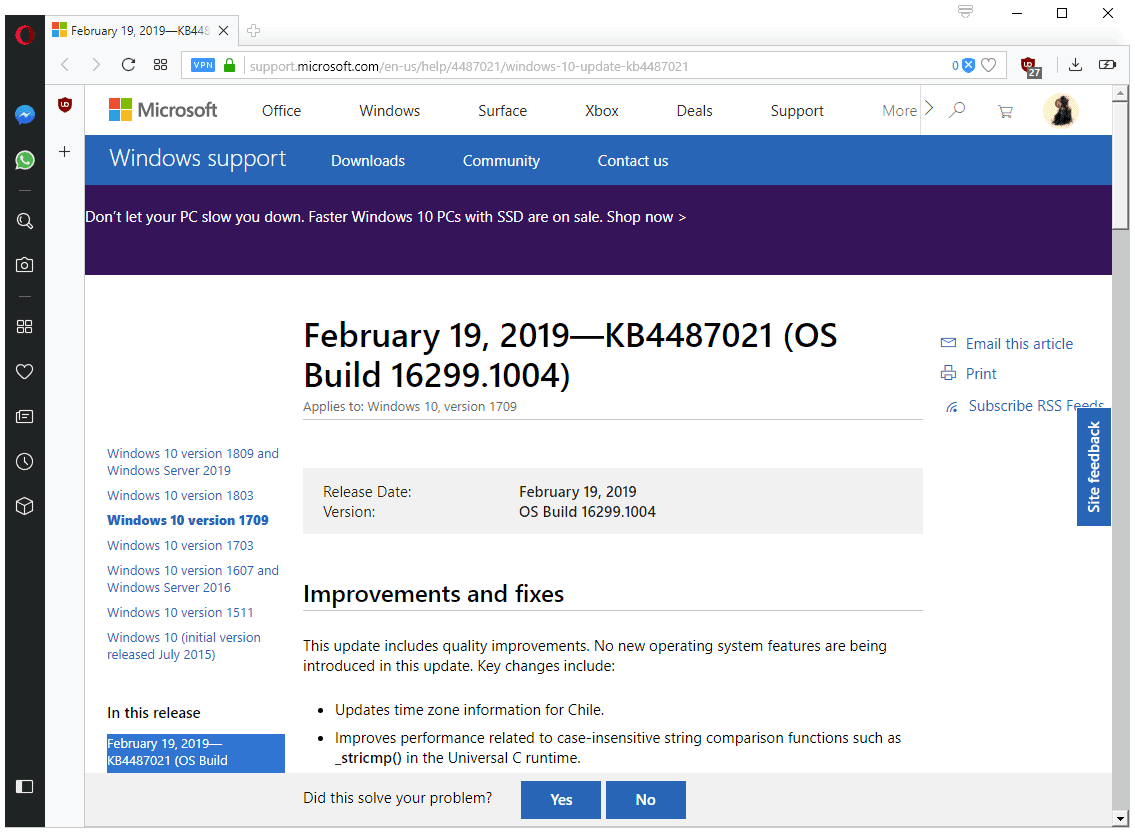 The changelog lists the following fixes and improvements: 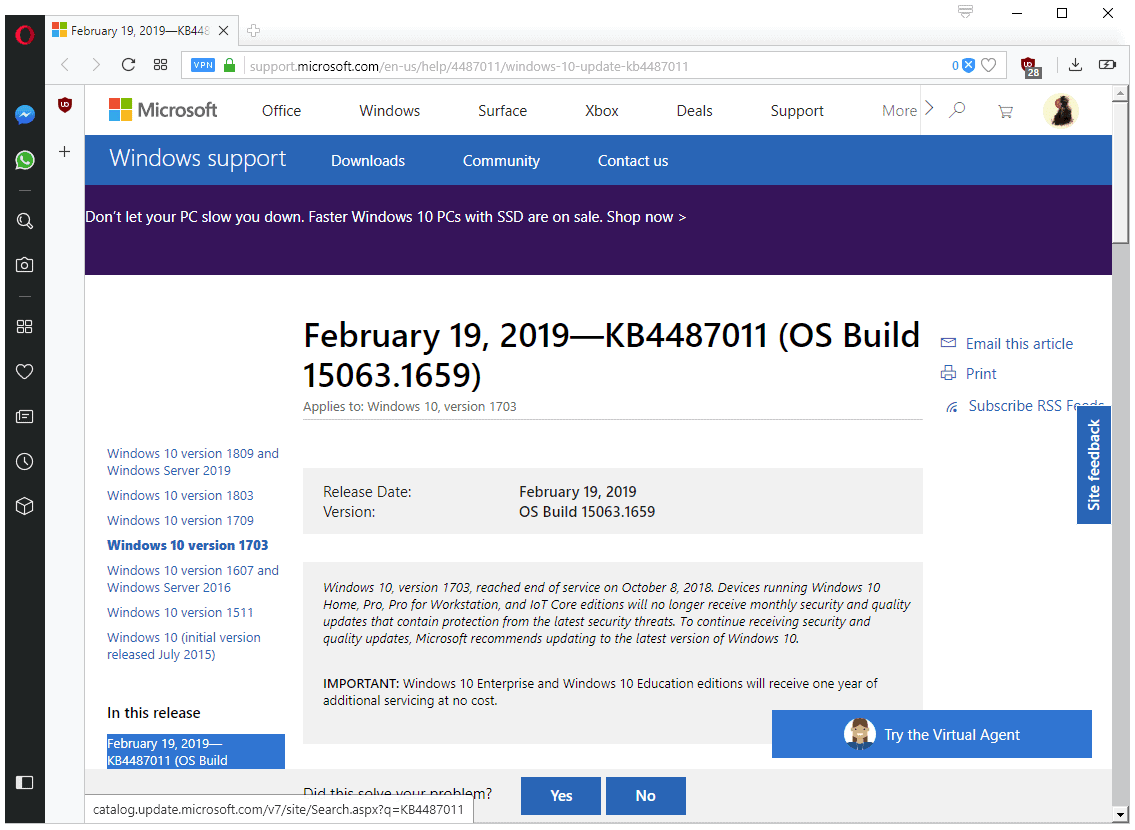 The update is only for Windows 10 Enterprise and Education editions. The update brings the build to version 15063.1659.

It includes the same updates as KB4487021 with the exception of the following exclusive additions: 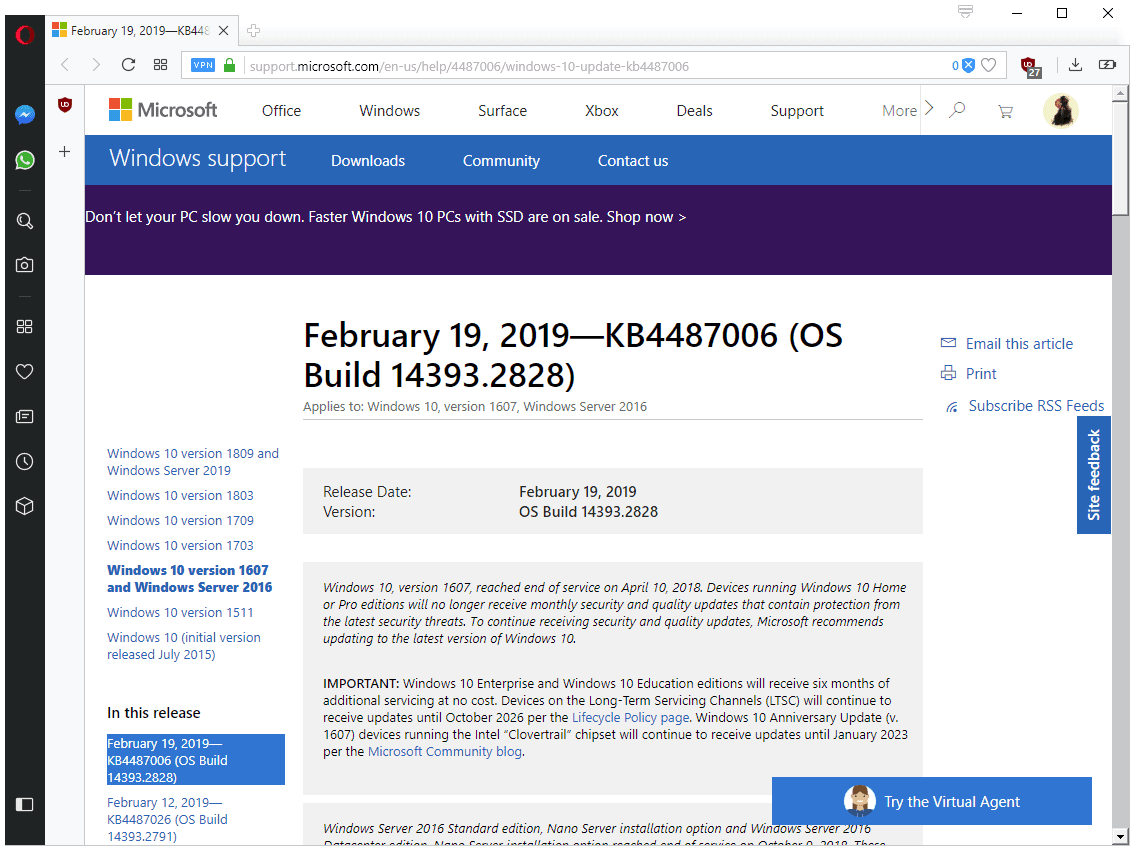 The update bring the version of the operating system to 14393.2828. It is only available to Enterprise and Education editions.

The changelog lists the following improvements:

The update can be downloaded manually from the Microsoft Update Catalog website.

Ghacks needs you. You can find out how to support us here or support the site directly by becoming a Patreon. Thank you for being a Ghacks reader. The post Windows 10 updates KB4487029, KB4487021, KB4487011 and KB4487006 released appeared first on gHacks Technology News.