About 4 years ago, when word got out that Microsoft would be launching a new browser, I was delighted. Finally, we had some competition for Chrome and Firefox, and a replacement for Internet Explorer. 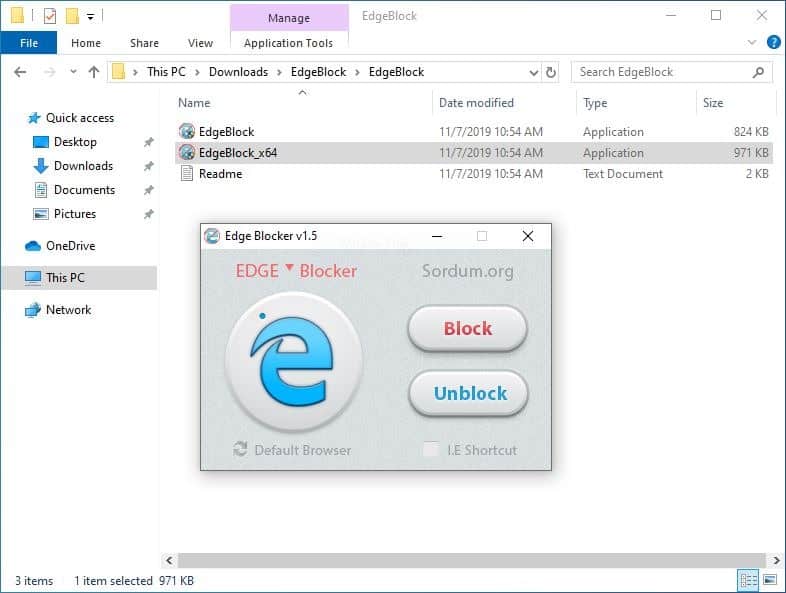 Fast-forward to today, and Microsoft is on the verge of replacing its ChakraCore JavaScript engine powered Edge browser, with the V8 engine of Google’s Chromium project; in other words, classic Microsoft Edge is replaced with a new Chromium-based Microsoft Edge browser.

What went wrong? If you ask me, one of the main issues was that Microsoft made the Edge web browser Windows 10 exclusive, likely to curb interest for the new operating system. But leaving the company’s own customers hanging and not bringing the browser to Mac OS X or Linux had an impact on user interest and usage share.

Even on Windows 10, Edge is mostly ignored judging usage share numbers. Some may use a Powershell command to uninstall it so that it does not open by accident. What if you simply wanted to disable Edge on your computer? Edge Blocker is a program intended for those who wish to temporarily (or permanently) block Edge. Maybe you want to prevent other users from accessing the browser. Or you want to stop Windows making you use Edge. Or you really can’t stand Edge.

Note: Before you proceed, it is recommended that you have another browser installed on your computer for obvious reasons.

Edge Blocker is a freeware portable application that is available for 32-bit and 64-bit systems. The program’s interface couldn’t be more straight forward as there are only two big buttons: Block and Unblock.

Hit the Block button to disable Edge safely. You will know that it’s blocked when the large Edge icon on the left side of the buttons is grayed out. To unblock it, hit the unblock button (and the icon should be restored to its normal color). You can close Edge Blocker, i.e., it doesn’t have to be running in the background for it to work.

You may have noticed there are 2 more options in the window; I though that these were inactive initially because of the light gray color but they do work. A click on “default browser” opens the default apps page of the Windows 10 Settings app. You may use it to pick a default web browser for the system.

Windows 10 does have the annoying habit of resetting the default app to Microsoft’s choice occasionally. It happens to me sometimes when I use an image viewer or music player and try to access a new format, and the button is a shortcut to changing the default browser again should that happen.

The other option, which is “I.E Shortcut”, adds an Internet Explorer shortcut on your desktop.

Edge Blocker received a much awaited update recently, and I tested it on the latest version of Windows 10 1903 (Build 18362.356). It works perfectly. How do you test it? It’s very simple, try to open Edge using the desktop or taskbar icon and it shouldn’t run. It would have been better if the program would take care of the icons as well but that is a minor issue that can be resolve quickly.

Microsoft Edge Chromium will be released on January 15th. It will also arrive on Linux in the near future and users who disliked the original Edge may want to take another look at the new browser to see if it works better for them.

Thank you for being a Ghacks reader. The post Edge Blocker is a free portable tool which lets you prevent Microsoft Edge from opening appeared first on gHacks Technology News.