Mozilla announced a big privacy push yesterday on the official site. The organization revealed that Firefox’s Tracking Protection would be enabled by default for non-private browser windows for new and existing users to improve user privacy and minimize tracking.

Mozilla published an updated version of its Facebook Container add-on for Firefox on June 4, 2019 as well which improves user privacy significantly.

Facebook Container was released in March 2018 officially to separate activity on Facebook from other web activity. Mozilla launched a Container test pilot experiment in 2017 to find out if there was interest for a container-based solution to contain sites in containers. The organization launched the Multi-Account Container add-on which gives Firefox users the tools at hand to create containers of their own.

Facebook Container is designed specifically for Facebook: official Facebook pages are loaded in a container to make it more difficult for Facebook to generate user profiles using third-party data. The main difference to Multi-Account Container is that Facebook Container prevents sites that are not on the allow list from being loaded in the container. It is more set-and-forget, and does not offer many customization options.

A handful of cool add-ons are available by third-parties that extend Firefox’s container functionality. The add-on Block sites outside container may be used to block sites from running outside designated containers and to allow sites to be run in multiple containers, Temporary Containers creates and deletes containers automatically while you use the browser. The new version of Facebook Container blocks Facebook scripts on third-party sites by default. Note that the blocking affects only active scripts; the Facebook button here on this site is passive and does not submit any data to Facebook on page load.

The new version of Facebook Container works for signed-in and anonymous users. Mozilla notes that the blocking makes it more difficult for Facebook to create so-called Shadow Profiles which contain data about users who are not on Facebook or data that cannot be linked to an existing Facebook user.

Firefox adds a purple fence badge to Facebook elements that it blocked on third-party websites. The very same blocking icon is also displayed when you load Facebook pages directly; this time it is displayed in the Firefox address bar. Facebook, Instagram, and Messenger are loaded in the container by default. 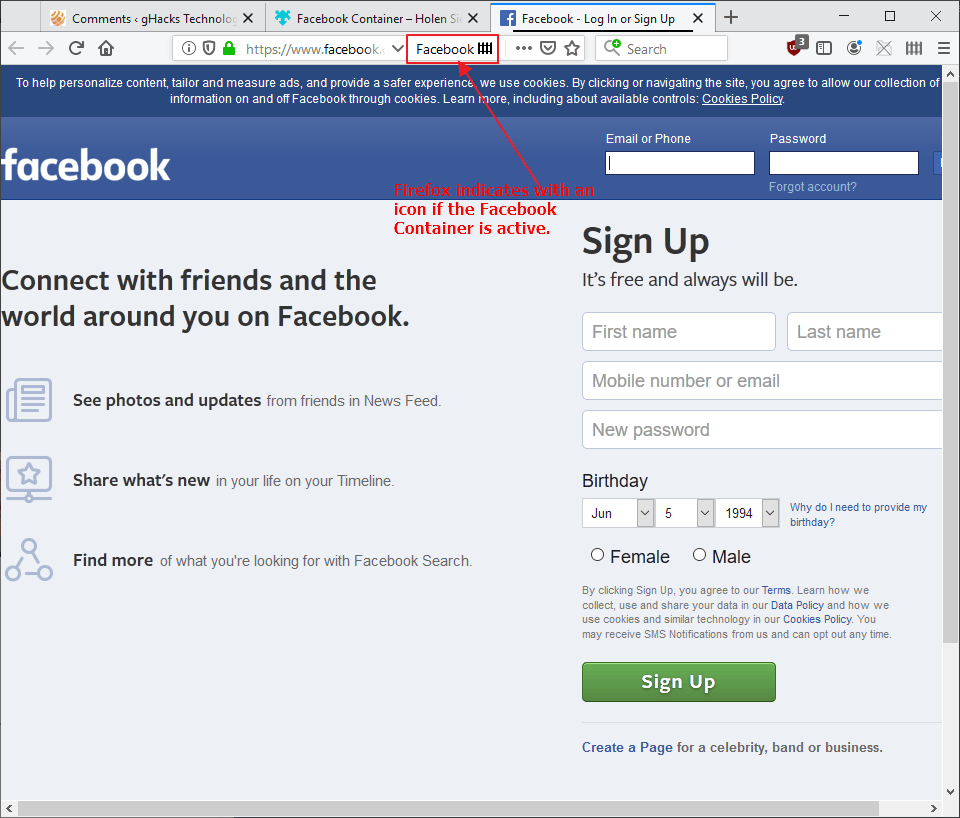 The colored underline of the container tab in Firefox’s tab bar remains as it has before to indicate that the tab was loaded in a container.

Facebook Container 2.0 improves the effectiveness of the Firefox add-on significantly by taking care of Facebook scripts on third-party websites.

Ghacks needs you. You can find out how to support us here (https://www.ghacks.net/support/) or support the site directly by becoming a Patreon (https://www.patreon.com/ghacks)). Thank you for being a Ghacks reader. The post Facebook Container 2.0 for Firefox blocks Facebook’s third-party site tracking appeared first on gHacks Technology News.