Firefox 48 Stable will be released on August 2, 2016 according to the Firefox release schedule. Firefox 48 is a major release that makes add-on signing mandatory on Stable and Beta versions of the browser, and introduces multi-process functionality to the first batch of users (who don’t run any add-ons).

Firefox 47.0.1 and earlier versions can be updated to Firefox 48. Additionally, updates for Firefox Beta, Developer, Nightly and Firefox ESR are released on August 2, 2016 as well. 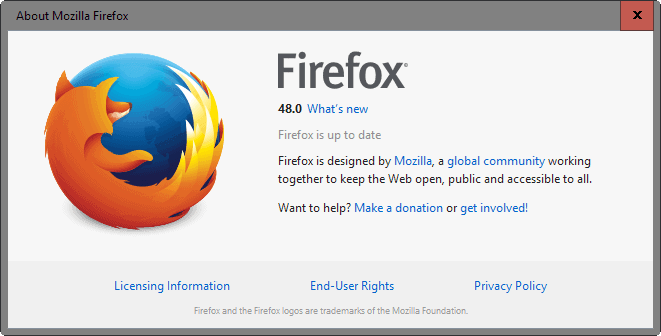 The majority of Firefox users will receive 48 via the browser’s update mechanics. Firefox supports automatic updates but may also be configured for manual checks or no checks at all.

Please note that the new version is released on August 2, 2016, and that it may not be available at the time of publication of this review.

You may check for updates by tapping on the Alt-key on the keyboard, and selecting Help > About Firefox from the menu. This runs a manual check for updates, and displays the current version and channel.

You may download all editions of Firefox using the links below instead. 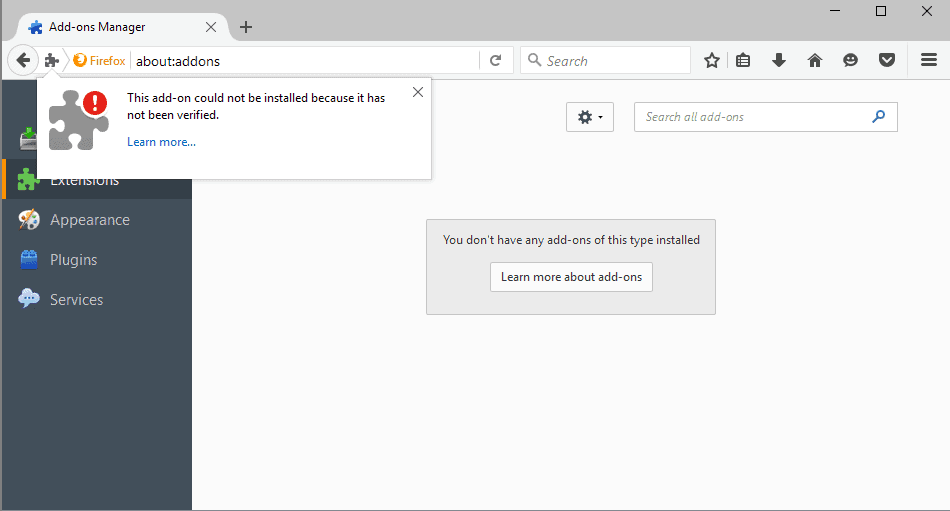 Firefox Stable and Beta users may no longer disable add-on signing in their versions of the browser. This blocks them from installing unsigned add-ons in Firefox. Unsigned add-ons are all add-ons that have not been submitted to Mozilla for signing.

Firefox displays “This add-on could not be installed because it has not been verified” when you try to install an unsigned add-on in Stable or Beta versions of the browser.

This means that it is no longer possible to install add-ons from third-party sources in Firefox, or old add-ons, if they have not been signed.

There is no way around this other than switching to another Firefox channel that still offers a switch to turn the functionality off.

The second major change is the roll out of multi-process Firefox. The feature separates content which, according to Mozilla, improves the browser’s stability, performance and security.

About 1% of users who have not installed a single add-on in Firefox will get it in the beginning. Mozilla plans to increase the figure over time.

Load about:support and check the “multiprocess windows” value to find out whether it is enabled in the browser.

Check out our Firefox multi-process overview for additional details. 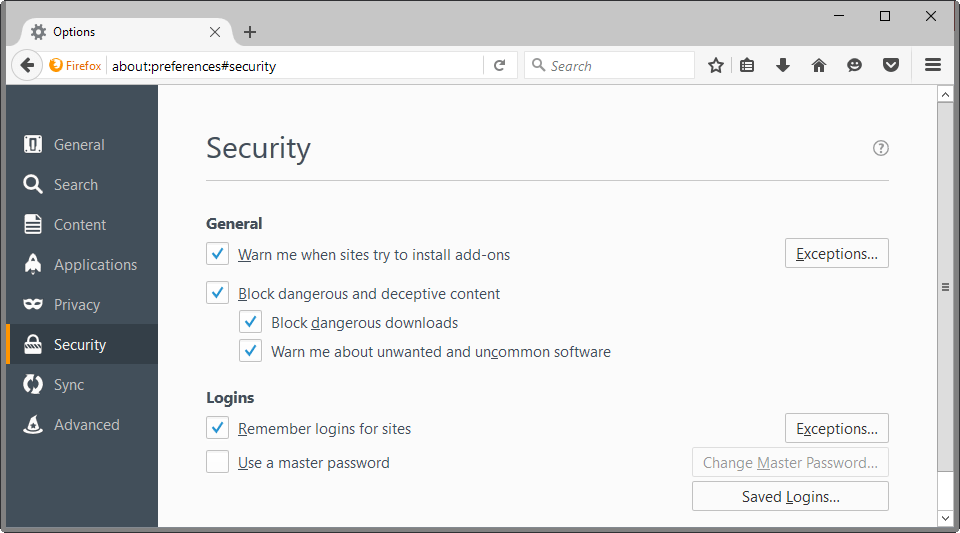 The first warns Firefox users when they download executable files that may contain adware, the second when a file is not very popular.

The change goes hand in hand with user interface changes. The download icon, displayed by default in the main Firefox toolbar, displays malicious downloads with a red exclamation mark, and potentially unwanted programs or uncommon applications with a yellow exclamation mark.

That’s not all though. When you click on the download icon to display the last downloads, the default action for each download may either be open or remove.

For potentially unwanted downloads and uncommon downloads, open is the default action indicated by a folder icon. For file downloads identified as malicious it is remove and indicated by an x-icon.

Downloaded files are not opened or removed right away though. Firefox displays prompts that explain the risks of opening the file or allowing the download.

The following three screenshots show the prompts for potentially unwanted, uncommon and malicious downloads in that order.

Experienced users may override any of the prompts or warnings by right-clicking on files and selecting the “allow download” option. This is useful if a download is marked as problematic erroneously.

Firefox users find more control over the download protection functionality under Security in the preferences.

The new “block dangerous and deceptive content” preference is listed on about:preferences#security. You may turn the feature off completely there, or turn if off for dangerous downloads, or unwanted or uncommon downloads separately.

Note: You may notice that the options to “block reported attack sites” and “block reported web forgeries” are no longer provided. While I have no confirmation yet, it appears that “block dangerous and deceptive content” fills that role now.

Experienced users may control safe browsing on about:config or in a user.js file just like before:

All Safe Browsing preferences are listed on the Mozilla Wiki. 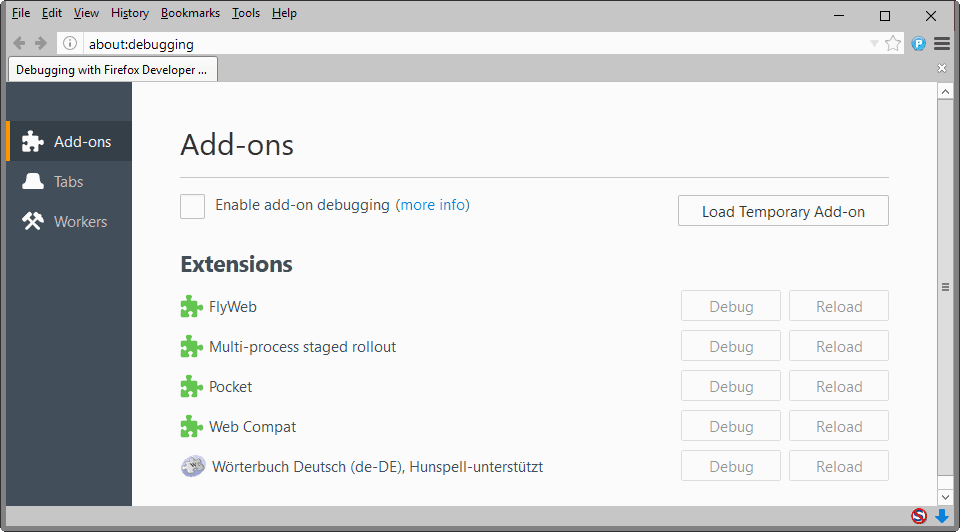 Add-on developers and users may load temporary add-ons in Firefox using the about:debugging page. This can be useful for add-on testing during development, or testing an add-on without installing it permanently in the browser.

Any change made to a temporary loaded add-on required the browser to be restarted. This changes with Firefox 48, as it is now possible to reload extension that are temporarily loaded. (Bug 1246030) 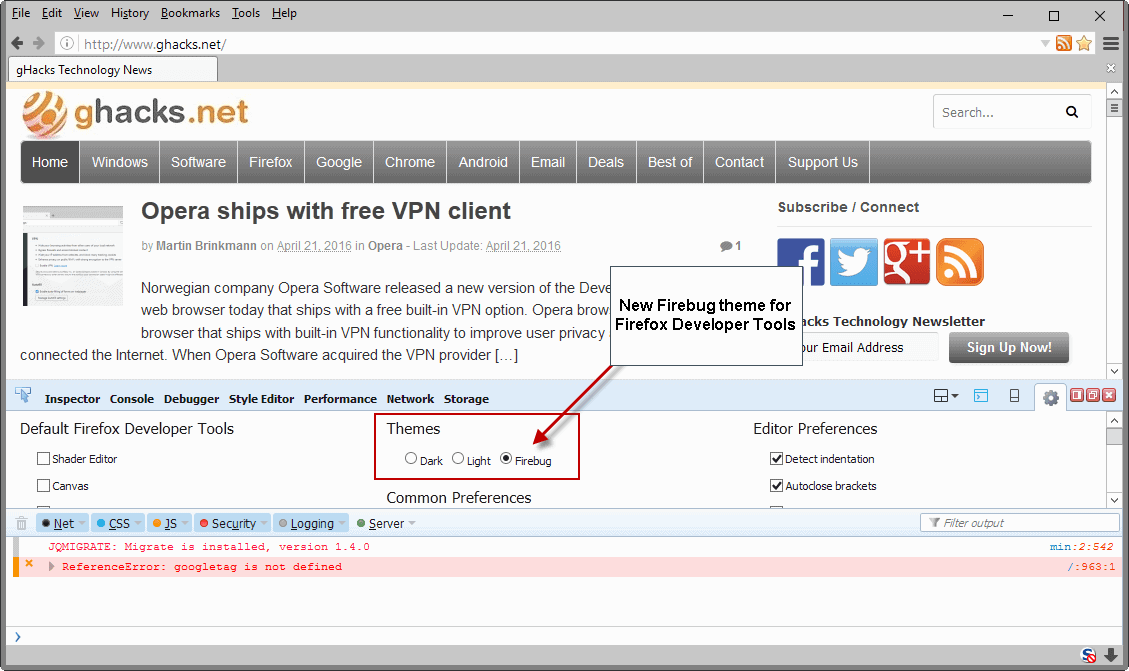 Firefox 48 ships with a new Developer theme. Besides dark and light variants, it is now also possible to load the Firebug theme which resembles the popular Firefox developer add-on.

Firebug functionality is or will be integrated in Firefox natively, and the add-on itself won’t receive any more updates because of it.

Check the resources section at the bottom of the article for links to full Developer change logs. 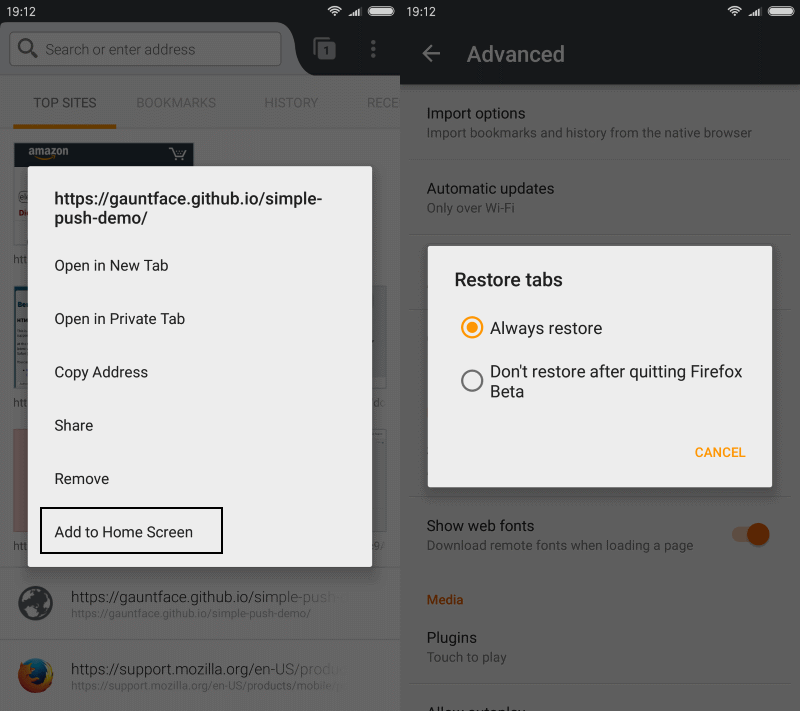 To make Firefox the default on Android 6 Marshmallow and higher, do the following:

Other Firefox 48 for Android changes

Security updates and fixes are announced after the release of Firefox 48. This guide will be updated when that happens.

The post Firefox 48 Release: Find out what is new appeared first on gHacks Technology News.