Mozilla released Firefox 57.0.3 on December 28, 2017. The update is for the Release channel of the Firefox web browser for all supported operating systems.

The release notes list a single issue that is fixed in the release:

The link to the bug leads to a protected page that users without proper permission cannot access. It appears that Firefox did send data about crashes to Mozilla even if users did not opt-in. 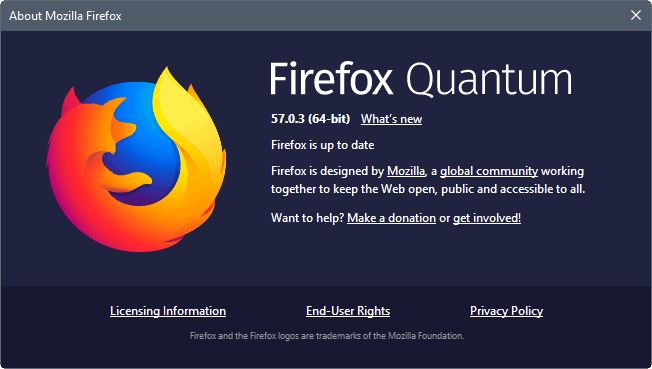 The first two options are enabled by default when you install a release version of the Firefox web browser but the last is not.

Firefox users need to enable the option to send crash reports to Firefox (opt-in) so that reports about browser or tab crashes are sent to the organization. These reports help Mozilla analyze crashes and fix issues that affect users of the browser.

Mozilla notes that the dump may contain data to identify users.

Crash reports include a ‘dump file’ of Firefox’s memory contents at the time of the crash, which may contain data that identifies you or is otherwise sensitive to you.

The new version of Firefox is out already. Firefox users who don’t want to wait until it is picked up by the browser automatically, can check for updates with a click on Menu > Help > About Firefox.

The new version is offered on the official Mozilla website as well.