Mozilla plans to release Firefox 57.0 to the stable channel on November 14, 2017. The new version of the web browser is a major release as it introduces big changes to the browser’s performance, interface, and add-on compatibility.

In short: the new version of Firefox is a lot faster than previous versions, replaces the Australis interface introduced in Firefox 29 with the new Photon interface, and drops support for the legacy add-on system to focus on WebExtensions. 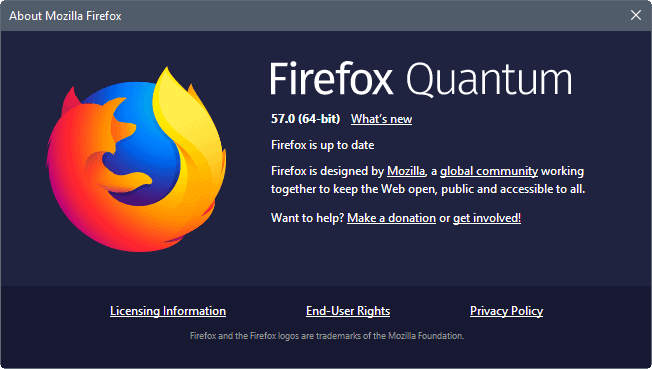 Firefox 57.0 will be released on November 14, 2017 to the browser’s stable channel. Existing Firefox users will have the browser updated automatically on the day, provided that automatic updates is enabled.

Firefox users can run manual checks for updates in the browser with a click on Menu > Help > About Firefox.

The release is already on Mozilla’s FTP server, but it is best to wait for the public release announcement by Mozilla. Mozilla will update the download links as well on November 14.

Firefox 57 is probably the most important release for Mozilla in a long, long time. The organization removed the old add-ons system from Firefox, refreshed the interface, and integrated some parts of Project Quantum in the browser. 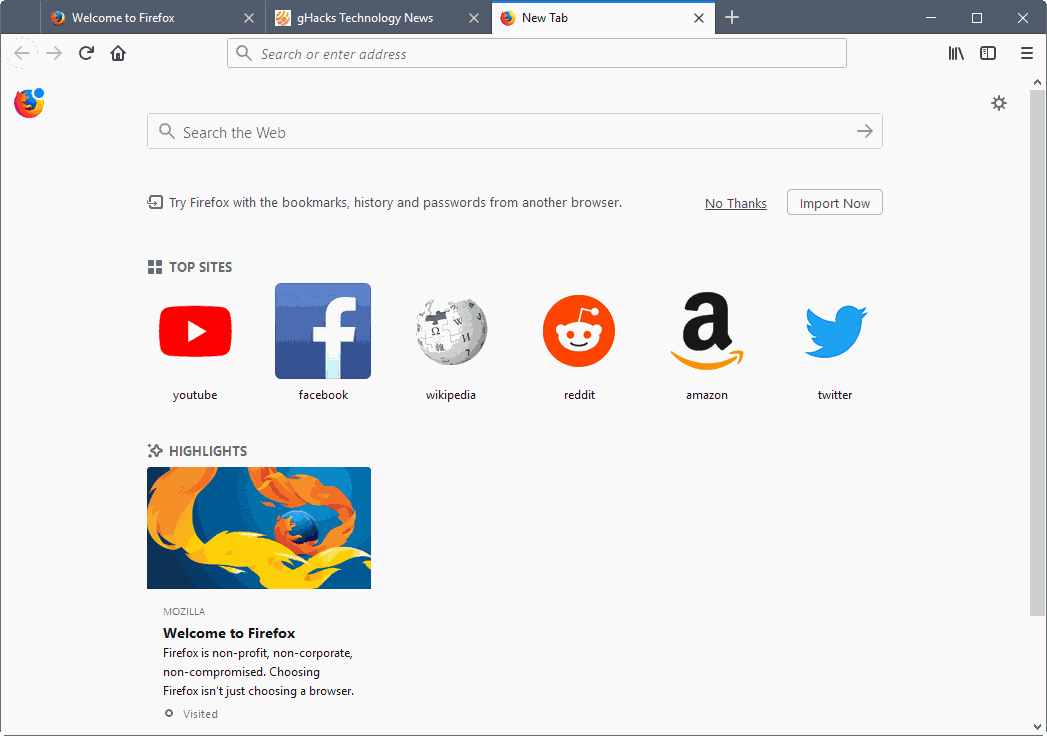 Firefox 57.0 comes with a modified interface, the first major refresh of Firefox’s design since the release of the controversial Australis interface in Firefox 29.0.

Photon is more than just an interface overhaul however as it is part of the Mozilla Quantum project. This means that Photon is not just a new paint for Firefox, but something deeper that took factors such as speed and responsiveness into account.

As far as the interface is concerned, Firefox 57.0 introduces changes to the New Tab page, the Firefox menu, themes, and customization options.

Firefox’s theme has changed; if you used a previous version of the browser you will immediately notice the changes. Version 57.0 of the browser comes with a light and dark theme that you can switch between, and options to change the theme’s density to touch or compact modes. Compact uses a little bit less of space, touch is optimized for devices with touch capabilities. 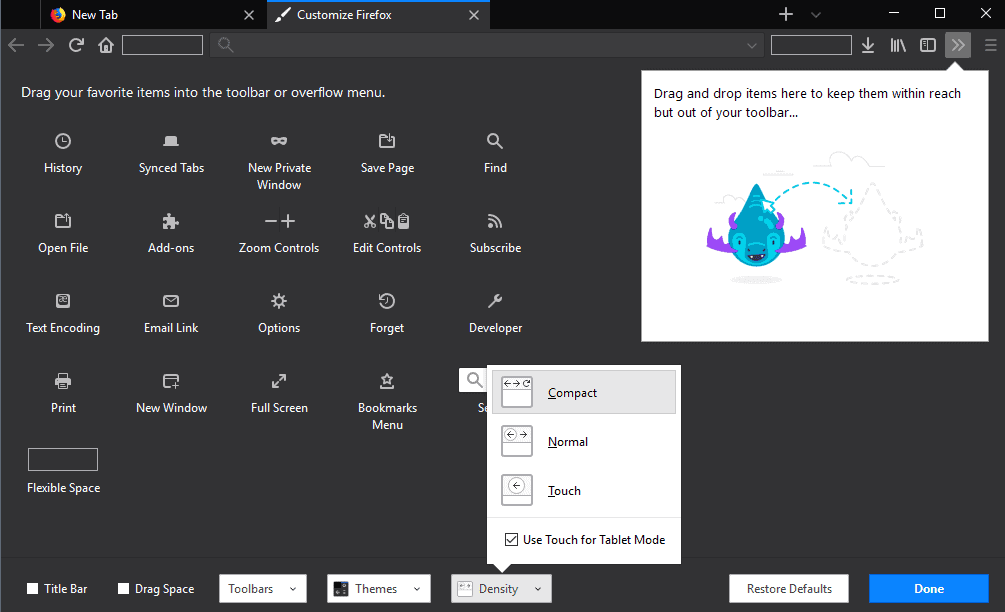 The Firefox menu is still at its default location, but it is not made up of icons anymore but of text links (with icons instead). The menu is fixed, meaning that you cannot add or remove items from it anymore. 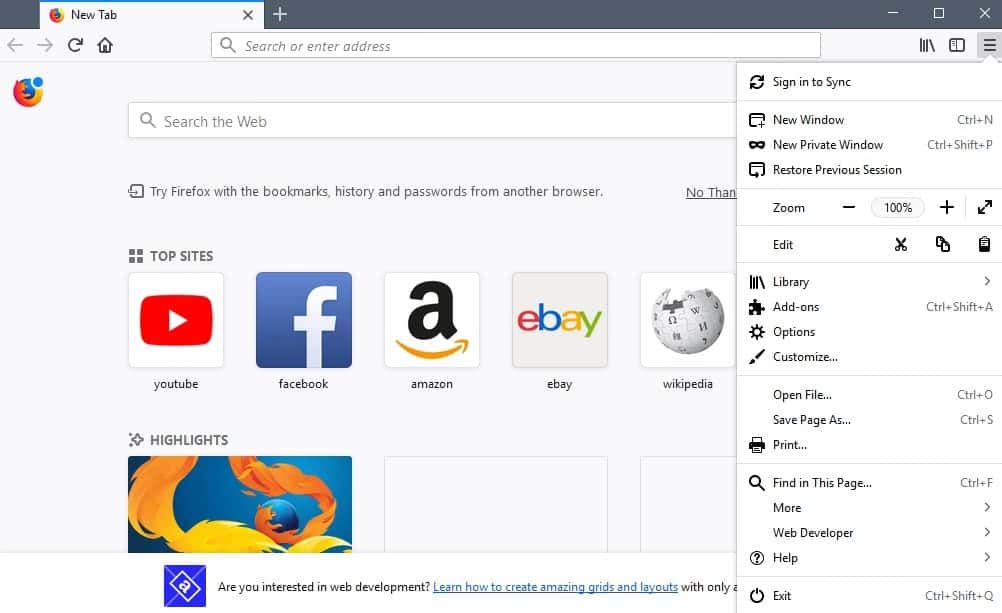 Customize options are still provided though as you can see on the screenshots above. You can still drag and drop many interface elements around, or remove them entirely from the browser UI. New items can be placed on the main toolbar or a new “>>” menu designed for items that you don’t want placed on the toolbar but in reach anyway.

When you navigate to a site you will notice the new “…” menu that is placed inside the address bar. This is the new Page Actions menu that lists options to interact with the page directly.

You find options to bookmark the page, or save it to pocket, and options to copy or email the link, send the tab to a connected device, or take a screenshot there.

Mozilla added dupes of the first two options inside the address bar as well. A right-click on the entry, e.g. “save page to Pocket” displays options to add or remove the icon from that spot.

The New Tab Page and Start Page of Firefox 57 is based on Activity Stream now. Activity Stream was launched as a Test Pilot experiment before Mozilla implemented the functionality in the browser.

The page features a search, top sites, highlights, Pocket recommendations (only select countries) and snippets that Mozilla displays. Firefox users can customize the New Tab page with a click on the cogwheel icon to display or hide any of the elements (removing all leaves a blank page).

Photon is more than just the visuals that you see on the screenshots.Mozilla tweaked animations, icons and many other things to improve the responsiveness of the browser.

The second big change in Firefox 57 is that parts of Firefox’s new web engine Quantum are implemented in the browser. Mozilla stated earlier that Quantum made Firefox twice as fast for some operations when compared to the recent Firefox 52.0. That’s an impressive gain.

Quantum makes use of technology that modern processors offer. It supports parallelism and other features, and uses these to make Firefox faster.

Without going into too many details, Quantum CSS uses parallel computing and other improvements to make the handling of CSS in Firefox a lot faster.

Mozilla revealed in September that Firefox engineers removed a total of 468 issues related to speed, bottlenecks for instance, in the preceding months.

You can check out this overview on Mozilla Hacks for details on that, and this article on Quantum in general on the same site.

Quantum makes the browser more stable at the same time, as Quantum Compositor was moved to its own process thanks to the previous integration of Electrolysis (multi-process Firefox).

In short: Firefox feels a lot snappier and faster.

Changes to the Firefox add-on system Firefox 57 does not support legacy add-ons or themes anymore. Firefox users who ran those in previous versions of the browser will notice that these have been disabled during the update to Firefox 57.

So, if you have updated to Firefox you may notice that some of your add-ons have been disabled, and that is the reason why.

Add-ons and themes that have been disabled are listed under legacy extensions on about:addons. Options to remove them and to use the new “find a replacement” feature are provided.

There is no guarantee that a replacement is available however. The Classic Theme Restorer extension for instance cannot have a replacement as WebExtensions cannot replicate its functionality.

In short: Firefox 57 supports only WebExtensions. Plenty of popular extensions have been ported, but there is an equally large number of popular extensions that have not yet. Some will never be ported for one reason or another (because of developer disinterest, a lack of APIs or because they are abandoned by their developer). 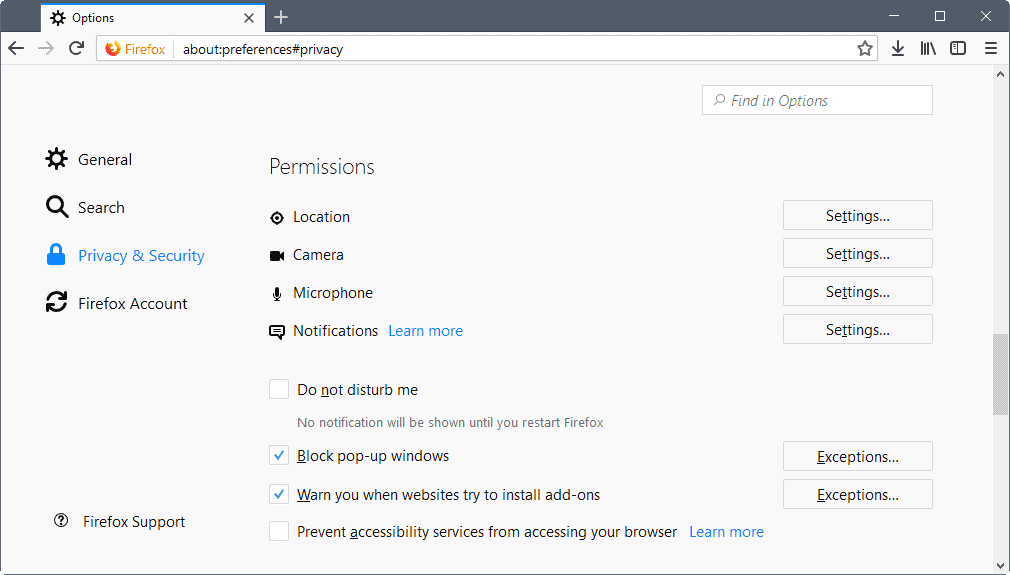 You find (some) permission controls in the preference in Firefox 57. You can control location, camera, microphone and notifications directly there.

Load about:preferences#privacy and scroll down to the permissions section. A click on settings displays all sites that requested access to the linked feature, e.g. location. You can remove select websites or all websites from the listing at any time.

There is still some work to be done in this regard though, as controls lack options that Firefox’s classic permissions system offered (removed by Mozilla).

Firefox 57.0 has three unresolved issues that may affect users of the browser:

Will be added once they are published.