Mozilla released a new version of the stable version of its web browser Firefox to the public yesterday.

Firefox 65.0.2 is already available as an update for existing Firefox installations.

The new version of Firefox fixes a geolocation issue on Windows.

Most Firefox installations are updated automatically to the new version thanks to the browser’s built-in updating functionality.

Users may select Menu > Help > About Firefox to run a manual check for updates. The same page lists the current version of the web browser. Note that Firefox will download and install the update if you open the About Mozilla Firefox page in the browser.

The new version is also available as a direct download on Mozilla’s website. Note that Mozilla offers a net installer by default which downloads data from Mozilla’s server during the installation. You may also download offline Firefox installers instead. 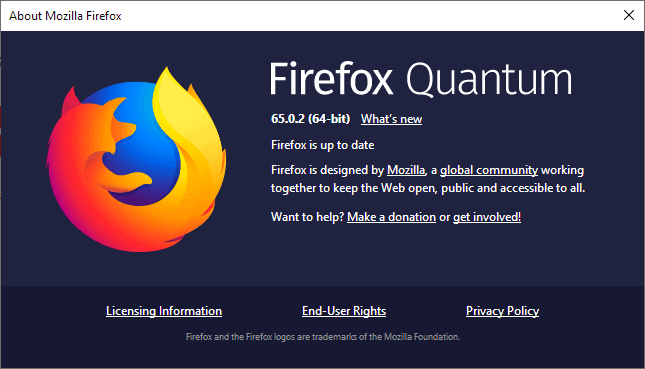 The release notes of Firefox 65.0.2 list only one entry:

Geolocation is a core API of modern browsers used to determine the location of a device in the world. It is often used by mapping and weather services that rely on the user’s location for functionality, e.g. by displaying the local weather report right away or computing directions.

Firefox gives its users control over the feature. The browser displays a notification to the user when sites try to use the Geolocation functionality. Users may allow or block it, and configure certain sites to permanently make use of it without prompts each time.

Mozilla does not reveal the actual issue that users would experience, only that it did affect geolocation on Windows.

Ghacks needs you. You can find out how to support us here or support the site directly by becoming a Patreon. Thank you for being a Ghacks reader. The post Firefox 65.0.2 fixes a geolocation issue appeared first on gHacks Technology News.